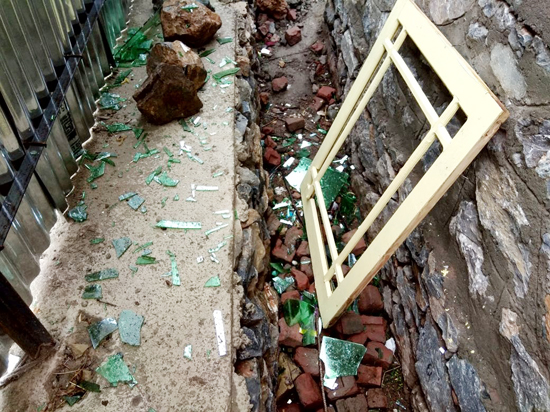 Fayaz Bukhari
SRINAGAR, Apr 3: Police today recovered body of a youth, who was abducted by the militants last night before leaving his three family members injured at Hajin area of North Kashmir’s Bandipora district.
Body of Muntazir Ahmad son of Farooq Ahmad Parrey was found near a bund on the outskirts of Hajin area in Bandipora district.
Police said that during the investigation, it has come to notice that local militant Mohammad Saleem Parrey has played a major role in the killing of Muntazir.
“Five foreign terrorists affiliated with LeT, Abu Muslim, Hubaib, Khalid, Abu Hamza and Haider are  also involved in the killing”, the spokesman added.
“The body was taken into the custody for conducting legal medico formalities including postmortem.
Earlier, police in a statement said that three members of a family received grievous injuries in late night militant attack at Hajin.
“At about 10:10 pm, 4 militants who are believed to be affiliated with LeT, barged into the house of Farooq Ahmad Parrey, resident of Par Mohalla Hajin and without caring about the life and dignity of the inmates, fired indiscriminately inside the house,” a police spokesman said.
In the incident three members received grievous injuries including wife, Rafeeqa, daughter Neelofar and brother Hilal Ahmad Parrey of Farooq. Militants also abducted Muntazir Ahmad Parrey, the son in law of House owner, from there, the spokesman said.
It may be mentioned here that one son of Farooq Ahmad, Muzzafar Ahmad Parrey alias Muzz Nata was killed by militants last summer, who was first decapitated and then thrown into the river.
In the meantime, police today claimed to have arrested a militant and an Over Ground Worker (OGW) of Ansar Gazwatul Hind from Hygam area of Sopore in North Kashmir’s Baramulla district.
Acting on a specific input about the movement of the militants of Ansar Gazwatul Hind led by Zakir Musa at Chik Hygam in Sopore and SOG launched searches and arrested the two activists.
The militant has been identified as Parvaiz Ahmad of Dadsara, Tral, Awantipora and an OGW as Aamir of Bohoo, Awantipora. Two hand grenades and one pistol were recovered from their possession.
Police said that the duo was planning to recruit youth in the outfit in North Kashmir. “A case under relevant section of law has been registered and further investigations initiated,” the official said.
Meanwhile, a youth, who was injured in Central Kashmir district of Ganderbal and was admitted at SKIMS Soura in critical condition last evening, succumbed to injuries today while over a dozen persons including police men were injured in clashes in parts of Kashmir.

Click here to Watch Video
Gowhar Ahmad Rather, 22, son of Abdul Rehman Rather who was admitted to SKIMS hospital on Monday evening, succumbed today.
Meanwhile, reports of intense clashes were received from Kangan and its adjoining areas soon after the news about the death of Gowhar spread in the area.
Three youth were injured during clashes with security forces in Kangan. They were immediately taken to nearby hospital where from all of them referred to Srinagar hospitals for advanced treatment.
The injured have been identified as Abdul Rashid khan son of Ghulam Qadir, Irfan son of Abdul Rehman of Kangan and Aamir Ahmad Lone son of Abdul Hamid Lone of Chitergul Kangan.
Condition of Amir is said to be critical and he is being operated at SKIMS Soura while as the Abdul Rashid has been admitted at Bone and Joint Hospital Barzulla, Srinagar and Irfan at SMHS, Srinagar.
At least eight policemen and three para-military CRPF men were also injured during the stone throwing clashes in Kangan and its adjoining areas.
The district administration in Ganderbal today ordered a magisterial inquiry into the cause of death of Rather.
Deputy Commissioner Ganderbal Piyush Singla has appointed Syed Shahnawaz Bukhari (KAS) as the inquiry officer. He has been asked to submit a detailed enquiry report as per Supreme Court and NHRC guidelines within 20 days.
In the meantime, Kashmir valley observed shutdown on 3rd consecutive day today against Shopian killings even as authorities imposed restrictions in parts of Srinagar and South Kashmir.
The shutdown was observed in response to strike called for separatists against the killing of 13 militants and four civilians.
Shops and business establishments remained closed in the entire Valley while public transport was off the roads due to the strike.
To thwart the protests, authorities had put parts of Srinagar including Old City and Maisuma under strict restrictions.
The work in Government offices and banks wasn’t affected by the strike call.
The schools and the colleges remained closed for the second consecutive day today on the orders of the Government. Kashmir University had also postponed exams scheduled for these two days.
Train services also remained suspended for third consecutive day today.
A Railway official said that train services were suspended and the decision was taken in wake of the apprehensions of law and order in the Valley.
Protesters today clashed with  security forces at Goal Chowk Shopian, Memendar, Bunbazar Shopian, near MLA residence Shopian, Beerwah Budgam, Newa Pulwama and Nawa Bazar Srinagar and several other places.
In the meantime, Kashmir University suspended class work and examinations for tomorrow.
The administration has decided to close down schools and colleges in Kashmir for third consecutive day tomorrow.