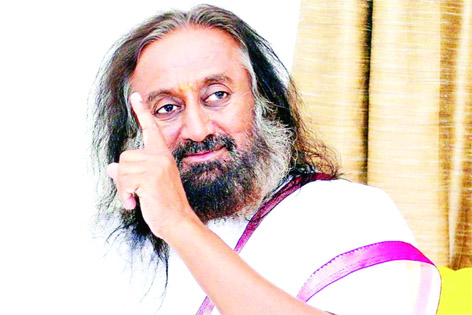 Ruchira Roy
From being a lofty concept hijacked by an esoteric group of seekers, spirituality has come a long way. More people today are looking to learn practices like meditation, breathing and yoga to achieve mental clarity, calmness, and to access their inner lives. As mental health disorders rage through this country with more than 20 crore people reportedly depressed, spirituality has much to offer. An important contribution in making spirituality available to everyone, beyond religious, caste or geographical differences, has been made by spiritual gurus like Sri Sri Ravi Shankar, who is said to have touched the lives of 450 million people worldwide through his teachings, programs and philosophy of life that seem to have a universal resonance.
As the world grapples with unprecedented mental health consequences of the pandemic which has hit at the very psyche of human kind, creating fear, anxiety and a sense of uncertainty and waywardness, Sri Sri who turns 64 this May, has been one of the few spiritual leaders actively engaging with millions of people, including the stakeholders in the crisis, the frontline workers, helpers, health professionals, businesses, industry bodies and the general public by way of doing both-providing material relief and extending mental comfort through free online meditation sessions that so far have 27 million participants globally, even as celebrities like Karan Johar, Hema Malini, Shiva Rajkumar, or musicians like K S Chithra, Rajesh Vaidhya, Shivamani, Shankar Mahadevan, Gundecha Brothers, sportsmen, medical professionals, media organizations and industry bodies like the FICCI, ASSOCHAM, PHDCCI, All India Organization of Chemists and Druggists, Dr. Vandana Shiva,and Indra Jaisingh, among others, interact, meditate and seek guidance from him.
The Beginning..In the summers of 1982, he went into a 10-days silence in Shimoga, where he cognized Sudarshan Kriya (SKY), a popular rhythmic breathing technique that 450 million people world over vouch for. It came to him as poetry, he said. The practice became the centerpiece of his programs taught world over in 156 countries. His first batch was a group of engineers and doctors, who reported feeling well-rested, energized and a sense of calmness they had never experienced before. In dealing with depression, researchers from NIMHANS postulated that SKY was as effective as the established anti-depressant drug imipramine and All India Institute of Medical Sciences (AIIMS), Delhi reported that SKY and Pranayama sessions reduced serum cortisol levels – an indicator of stress. In a country with more than 20 crore people suffering from depression, his teaching and spiritual practices came as strong hope for non-invasive forms of healing.
In 1982, Sri Sri Ravi Shankar founded The Art of Living which would grow into one of the world’s largestsss volunteer driven organizations over the next few decades, working in the field of education, trauma and disaster relief, stress mitigation, environmental conservation, and conflict resolution. As part of its ongoing work, volunteers of the organization have provided 59.7 million meals in India for 1.5 million people and distributed 500 tons of essential relief material to affected families. In the US, volunteers have distributed 25,000 PPEs and led trauma relief workshops for frontline workers and healthcare professionals. Under the ‘iStandwithHumanity’ campaign launched by Sri Sri, the organization has reached out to over a million and a half daily wage workers and migrant laborers stuck in different parts of the country with food material, medical supplies and sanitizers. The organization has opened a national helpline (080-676-12338) where the Art of Living teachers are counseling people undergoing stress and anxiety in the lockdown. With an objective to support the healing and recovery in the long term, the organization also launched a helpline to help those undergoing severe mental distress and physiological symptoms in the absence of alcohol, drugs and other substances.
Power of Connection..His teachings can be experientially integrated into life, working through exploration instead of imposition. This explains why they work well especially for those in the heart of a conflict. They have benefitted the genocide facing Yezidi community in Syria, eased inter-communal tensions in Iraq, and stopped gang wars in Ivory Coast. Sri Sri has found global acceptance across wide political spectrum, working continuously with people on all sides of a conflict, the victim and the perpetrator, the law enforcer and the outlawed, sometimes drawing flak for it from vested interests, but seldom hindered by it. In Kashmir, Northeast India, Ivory-coast, Iraq, Kosovo, Lebanon, Colombia, Middle-east among other places-Sri Sri has created safe spaces for dialogue to flourish, in spite of stiff uncomfortable resistance. He is known for his care giver approach to mediation which finds trust among stakeholders.
To cite an example, when tension in Iraq soared in 2008, Sri Sri met leaders on all sides (Shia, Sunni and Kurds among others). Peace observers say, he is one of the very few world leaders to have been able to do this at the time of conflict.
“In any long-drawn conflict, the victim tends to turn an oppressor and the oppressor becomes a victim,” says Sri Sri, “A broader vision and spiritual understanding alone can break this vicious cycle.”
In 2014, Sri Sri was one of the lone voices calling to draw attention to the Yezidi genocide and send help, rescuing and rehabilitating almost 2500 Yezidi women captured by the ISIS. Former Iraqi Prime Minister, Nouri Al-Maliki says about Sri Sri, “There are big powers who have big might, but they are not able to unite the hearts and mind of people. This work can be done only by a spiritual leader.”