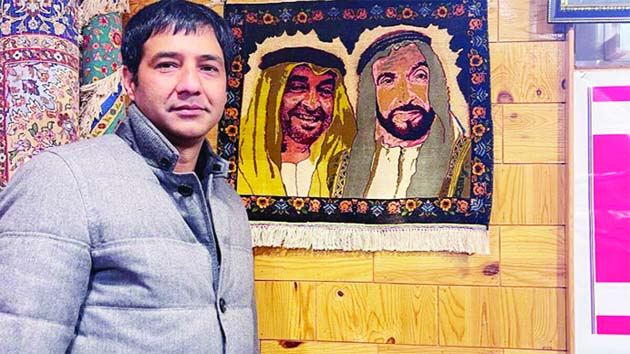 A Kashmiri youth makes pashmina weaving an international brand. Dilshad Noor reports from Srinagar
Kashmir’s Pashmina carpet is famous all over the world. But the Kashmiri people have now left behind this centuries-old ancestral work. The changing market trends and the situation created by the pandemic have hit the handicraft industry hard. In such a situation, some young people are now engaged in getting this industry out of the crisis. One of these young men is Shahnawaz Ahmad Sufi.
Shahnawaz Ahmed runs his carpet factory in the Eidgah area of Srinagar. After graduating from the School of Fine Arts and Music, he chose his father’s carpet weaving profession instead of looking for a government job. However, his father never wanted him to enter the profession.
Shahnawaz says, “My father never wanted me to enter this profession. They thought I was not good at carpet weaving.”
However, his father passed on the inherited profession to his three eldest sons. But in the end, the father, inspired by his son’s art, allowed Shahnawaz to enter the profession.
Shahnawaz gave new life to carpet weaving using new techniques. He started using not only calligraphy but also gold and silver threads in carpet weaving. Their carpets, woven using the latest technology, were much appreciated in the Gulf.
He wove a silk carpet with a double portrait of Sheikh Zayed bin Sultan Al Nahyan, the founder of the United Arab Emirates, and Crown Prince Sheikh Mohammed bin Zayed Al Nahyan of Abu Dhabi. The price was two lakh rupees. He made another silk carpet with the name of Hazrat Muhammad (PBUH) in Arabic calligraphy. Silver ‘gold’ work was done on this carpet. The price of this carpet was Rs. 7 lakhs. They sold many such carpets.
Shahnawaz now wants to give international recognition to this centuries-old tradition. He says that Kashmiri carpets are usually associated with the Persian style. But now they are developing in a new way. They started weaving carpets to decorate walls and other domestic spaces. Which became very popular.
Zari has been used in carpet weaving for a long time, but we made fusion work of walnut wood frames from woven antiques,” he says. Due to this, our carpets got tremendous response in the international market.
Shahnawaz says Kashmir products were in high demand in European markets in the 18th and 19th centuries. But over time, that changed. “But now we need to adopt the modern style of carpet weaving. So that we can meet the demand of the international market,” he said.
In Shahnawaz’s initiative, he has the support of Emad Pervez, a local social entrepreneur.
“Shahnawaz is a brilliant craftsman, we are both working together to make Kashmiri handicrafts a luxury brand,” Pervez said.
“For this, we are also working on the lives of Kashmiri artisans. So that the next generation can be attracted towards this industry. New techniques and designs are also being used in carpet weaving, which is not only helping to revive the handicraft industry but also employing the youth,” he said. Now they want the government to recognize their potential and help them. Only with the help of the government will Kashmiri handicrafts be promoted and people’s interest increase. (TWF) 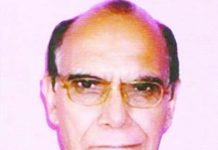