JAMMU, May 26: All Jammu and Kashmir Panchayat Conference (AJKPC), registered body of elected PRI members has urged the UT administration headed by Lieutenant Governor Manoj Sinha to make all new administrative units of Nagrota Assembly segment functional which were announced by the then Government in 2014.
The AJKPC has also suggested that till regular order is issued by the Government or a policy decision is taken by the Government, for the time being , the incumbent officer i.e Naib Teshildaar Jindrah be issued powers of Tehsildar,
Similarly, Tehsildar Dansal should be given powers of Sub-Divisional Magistrate (SDM) and also Tehsildar Nagrota should be also given powers of the SDM so that the people of the area heave a sigh of relief, the AJKPC leader said.
“During recent past, the AJKPC has received several representations from different districts and blocks of Jammu and Kashmir and more specifically from inhabitants of Nagrota, Dansal and other nearby areas of district Jammu wherein, they have requested the organization to convey their demand to your good self for up-gradation of their local administrative units like Naib-Tehsil, Tehsil and Sub-Division,” Anil Sharma, UT president of AJKPC, said in a memorandum submitted to the Lieutenant Governor through Deputy Commissioner Avny Lavasa during the Block Diwas programme at block Dansal.
“In the year 2014, the then J&K Government had formulated an empowered committee of ministers who had recommended creation of many new administrative units and also up gradation of incumbent administrative units. As per recommendations, Jindrah was granted Tehsil Status while Dansal Teshil and Nagrota Tehsil were given the status of Sub-Division. Unfortunately, these decisions remained on papers till date,” Sharma regretted.
He said the villagers of these administrative units have informed the organization in several meetings that they face many difficulties in getting services from these administrative units and have to travel so long even for petty work.
“It is an aspiration and also a genuine demand of the people that till regular order is issued by the government or a policy decision is taken, for the time being, the incumbent officer- Naib Teshildar Jindrah be issued powers of Tehsildar,” he suggested.

Travel Trade Associations demand allocation of quota to all beneficiaries 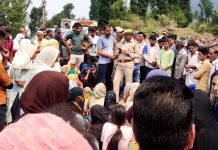