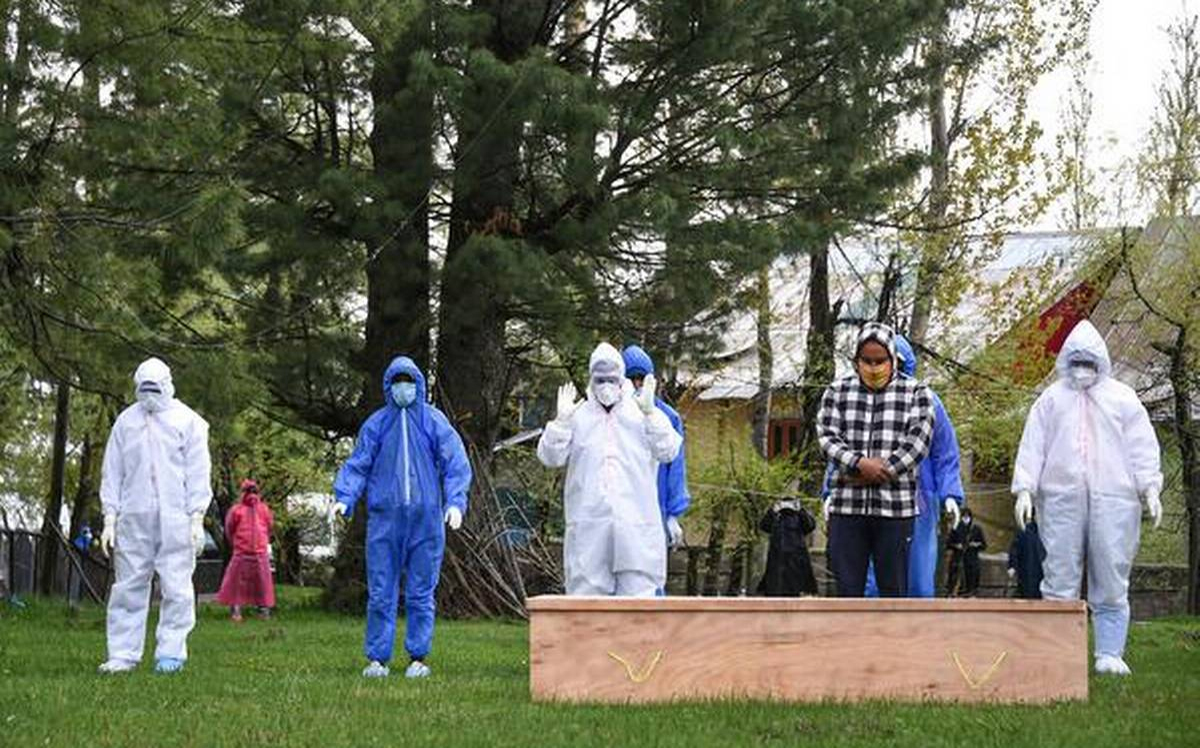 Srinagar, July 30: In a major spike in deaths, 24 COVID-19 patients died in Kashmir since last night, taking the toll in Jammu and Kashmir to 366 while 367 Coronavirus cases including at least 61 security forces were reported from Valley taking the overall tally in J&K to 19869.
Click here to watch video
Majority of the deaths occurred in Srinagar which continues to top the list with highest number of fatalities.
Among 24 deaths, four took place at Chest Diseases hospital Srinagar, and five in the SKIMS Soura including a 55-year-old CRPF man, while two persons died at Government Medical College Baramulla and an 80-year-old man from Shopian, at District Hospital Pulwama.
A 53-year-old woman from Ashajipora Anantnag died, a day after she was admitted to SKIMS hospital.
The four other deaths reported at SKIMS Soura include a 75-year-old woman from Shivpora Srinagar, a 72-year-old man from Batamaloo Srinagar, a 60-year-old man from Srinagar besides the CRPF trooper from 198 battalion.
The deaths reported at CD hospital include a 50-year-old woman from Batamaloo Srinagar, a 70-year- old from Keegam Shopian, a man from Humhama Budgam and a 65-year-old man from Naseembagh Srinagar.
The woman from Keegam Shopian had severe pneumonia with hypothyroidism and the patient was ventilator. She developed sudden cardiopulmonary arrest at 2 am today.
The 72 year old woman from Batamaloo had bilateral Community Acquired Pneumonia. The woman was suffering from hypertension and hypothyroidism. She had cardiopulmonary arrest at 7 am today and was declared dead after 45 minutes.
A man from Humhama Budgam, who was suffering from bilateral pneumonia with hypothyroidism died today. He was on mechanical ventilator and developed sudden cardiopulmonary arrest at 1.20 am today and was declared dead after 15 minutes.
The man from Naseembagh Srinagar, was suffering from pneumonia with hypertension. He was on mechanical ventilator. He had sudden cardiopulmonary arrest last night and he could not be revived.
The other deaths include a 70-year old woman from Delina, a 75-year-old man from Kreeri Baramulla besides two octogenarian men from Muldare and Turkawangam.
An 80 year old man from Muldora Shopian who was having chest diseases along with comorbidities died today. The 80-year-old from Turkawangam died at SMHS hospital, three days after he was admitted there. He was suffering from pneumonia and had comorbidities.
Two patients one from Delina and another from Kreei Baramulla, both of them were suffering from bilateral pneumonia, died on July 29, at GMC Baramulla. One of them, 70-year-old woman from Delina, remained admitted for three days before the death while the 75-year-old from Kreeri was admitted on July 27.
A 60-year-old man from the Damhal area of district Kulgam who died on July 28 was included in the list of COVID-19 deaths today.
So far, 339 deaths have been reported in Kashmir. Srinagar district with 113 deaths has the highest fatalities followed by Baramulla 68, Kulgam 28, Budgam 26, Anantnag 25, Shopian 23, Kupwara 20 and Pulwama 19.
And Kashmir today reported 367 Novel Coronavirus cases including at least 61 security forces and policemen taking the overall tally in J&K to 19869. They included at least 50 from CRPF, nine from Army’s BB Cantt Srinagar and two from Jammu and Kashmir Police.
An official said that 183 cases were reported from Srinagar, Baramulla 42, Kulgam 2, Shopian 6, Anantnag 20, Kupwara 16, Pulwama 32, Budgam 20 and Bandipora 33.
Srinagar tops the list with 4658 cases followed by Baramulla with 1877, Kulgam 1493, Shopian 1422, Anantnag 1278, Pulwama 1395, Kupwara 1085, Budgam 1248, Bandipora 711 and Ganderbal 401.
An official said that 1112 samples were processed at SKIMS and 184 tested positive. They include 50 from CRPF, 43 from Srinagar, 29 from Budgam, 26 from Anantnag, 9 from Ganderbal, nine from BB Cantt, six from Pulwama, 3 from Kulgam, 2 each from Kupwara, Baramulla and one each from Bandipora, Poonch and Kargil.
He said that 932 samples from airport were tested at SKIMS and 15 tested positive. They included 10 from Srinagar, two from Rajouri and one each from Kulgam, Kupwara and Poonch.

H&ME takes control of SKIMS Soura, Bemina
After several instances of mis-management at SKIMS Soura, the Government today ordered that both the facilities shall work directly under the administrative control of Health and Medical Education (H&ME) Department.
An order in this regard was issued by the General Administration Department (GAD) directing that SKIMS Soura and SKIMS Medical College Bemina shall comply with order issued by the Financial Commissioner of H&ME till the pandemic is over.
“In the interest of administration and effective management of the COVID-19 pandemic, it is hereby ordered that all the hospitals of Kashmir province including SKIMS Srinagar, SKIMS Medical College, Bemina and others shall work directly under the administrative control of the Financial Commissioner Health and Medical Education Department and shall adhere to all the orders and instructions issued by him till the pandemic is over,” the order read.
It is pertinent to mention here that there have been several instances of mismanagement of COVID-19 patient care; following with the administration has taken the decision of temporarily transferring the control of the hospitals, particularly SKIMS, Soura to the H&ME Department, apparently, aiming at better management of affairs.
There were allegations of mis-management against administration of SKIMS Soura as it has failed to provide effective patient care during COVID-19 crisis.