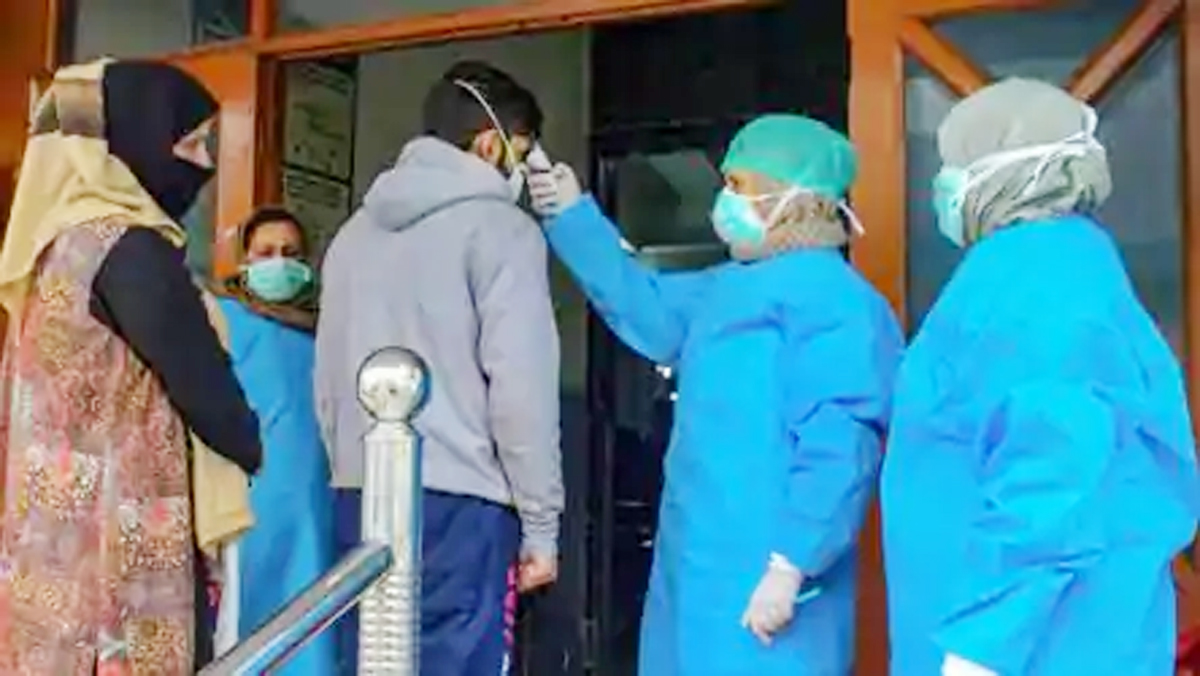 Srinagar, May 27: In a major spike in COVID-19 positive cases in Kashmir, 121 persons today tested positive for Coronavirus and two persons died taking the Jammu and Kashmir COVID death toll to 25.
Click here to watch video
Two COVID-19 positive persons today died in Kashmir valley taking the death toll in Jammu and Kashmir to 26 with 23 in Valley and 3 in Jammu.
A 70-year-old man from Sarnal Anantnag who died yesterday at GMC Anantnag tested positive for COVID-19. He had underline ailments like pneumonia and was admitted to the hospital on May 25. He died yesterday and his sample was taken and it tested positive today. His body was detained at mortuary and was handed over as per the COVID-19 protocol.
The other is a 55-year-old man resident of Fateh Kadal Srinagar who had tested positive earlier this month and ultimately died of cardiac arrest. He was shifted to CD Hospital Srinagar from SICU SMHS on May 18 as operated case of Exploratory Laprotomy with Appendectomy after testing COVID positive.
He was kept intubated in SICU SMHS Hospital and then extubated, kept on NIV and then was shifted to CD Hospital. At CD Hospital, he was improving and hemodynamically stable and was maintaining saturation without oxygen.
On Wednesday at 4 pm, he developed sudden cardiac arrest and was immediately intubated, coupled to ventilator and resuscitated. He developed another cardiac arrest and died instantly.
As per officials, 27 cases were reported from Kulgam, 26 from Kupwara, 21 Pulwama, 20 from Srinagar, 12 from Shopian, four from Anantnag and two each from Bandipora and Budgam districts.
Among the fresh cases, 89 tested positive at Microbiology Laboratory of CD hospital, 29 at viral diagnostic lab of SKIMS Soura and 3 at Army hospital Uhampur.
Medical Superintendent SKIMS, Dr Farooq Jan, told Excelsior that 1440 samples were processed today at the SKIMS lab and 29 tested positive with 18 from Kulgam and 11 from Srinagar.
He said that among the positive cases confirmed at the hospital include 70-year-old from Owanta Bhawan Soura, 35-year-old from Safakadal, 45-year-old man, 42-year-old woman, 70-year-old man and 45-year-old from Bhagat besides a woman putting up in Centaur hotel, all with travel history to Delhi.
A 21-year-old man with travel history to Gujarat, 31-year-old from Bemina with travel history to Delhi, 36-year-old man from Fateh Kadal with travel history to Delhi and 50-year-old woman with travel history to Ahmedabad tested positive.
Fifteen people belonging to Chattabal village of Kulgam district tested positive at SKIMS. They include three girls and six women aged 4, 12, 15 and 20, 22, 21, 60, 50 and 25 years respectively and a boy and five men aged 15, 26, 44, 60, 36 and 18 years.
A 27-year-old woman and 22 year old man from Bugam area and a 16-year-old girl from Nursingpora area of Kulgam district also tested positive.
Nodal Officer for COVID-19 at the Government Medical College Srinagar, Dr Salim Khan, said that 89 people tested positive at GMC lab today. He said that they included two doctors who are doing internship at GMC Srinagar and one driver of the CD hospital.
They include eight women, 2 girls and 4 men aged 35, 45, 35, 80, 35, 45, 35, 80, 10, 10, 52, 24, 52 and 24 years respectively from Hajin village in Langate in district Kupwara, four women, one girl and 5 men aged 30, 58, 25, 25, 16, 60, 35, 80, 30 and 58 years from Kachoo Lanagate in district Kupwara.
Others include three men aged 26, 25 and 23 years from Wahibugh, Larmoo and Kashipora in Pulwama; three women aged 24, 23, 27 years from Pulwama, Khalam, and Kakapora Pulwama; four men aged 20, 24, 27 and 24 years Drabgam, Khrew, Pampore and Hurdmir Pulwama; two girls aged 8 and 17 from Kakapora Pulwama; seven men aged 30, 65, 26, 25, 18, 50, 80 Pampora, Pampora, Gungoo, Lajoora, Dharmgund, Gadpora, Gadpora in district Pulwama and a 70-year old woman from Gadpora in Pulwama; ten women aged 21, 25, 25, 19, 25, 21, 25, 51, 24 and 34 years from Dangiwachha, Pattan, Sopore, Sopore, Baramulla, Sopore, Baramulla, Baramulla and Chanpora in district Baramulla respectively; eight men aged 26, 24, 25, 52, 30, 20, 80, 70 years from Rafiabad, Gantamulla, Gantamulla, Baramulla, Nadihal, Pattan, Limber, Janbazpora in district Baramulla; two men and one woman aged 40, 65 and 25 years from Awoora, Handwara and Darpora of district Kupwara respectively; two men aged 24, 24 and two women aged 30, 50 years from GMC hostel Bemina, Bemina, Dara and Dara Srinagar respectively; 4 men, 2 boys and 3 women and one girl aged 25, 42, 27, 25, 12, 5, 46, 30, 30 and 15 from Beminpora, Memminder, Palpora, Memminder, Memminder, Palpora, Memminder, Krawoora, Kareewa and Memminder areas of Shopian district respectively.
Three people from Kashmir also tested positive at Army hospital in Udhampur today.

3 die in windstorm
A minor girl and a woman were killed while another lady was injured today after a tree uprooted by strong winds fell on them in Keller area of South Kashmir’s Shopian district.
The incident happened in Shukroo Chulawali in Shopian district, where a Bakerwal family came under a tree in which a minor girl identified as Babli, 10, daughter of Gami Bajran and a woman identified as Zaina Bano, 50, wife of Abdul Qayoom Jogi of Akhnoor died.
One more lady who came under the tree identified as Shabnum, 25, wife of Mustafa Bajran of Akhnoor sustained injuries. “She was evacuated to hospital Keller for treatment,” they added.
Click here to watch video
Meanwhile, a lady was also killed after a tin shed fell down due to strong winds in Srigufwara area of Anantnag district.
A tin sheet fell down on the head of a lady from her residential house, which left her seriously wounded. She was rushed to the Sub District Hospital (SDH) Srigufwara where doctors declared her as brought dead. She has been identified as Nuzhat Bashir, 24, daughter of Bashir Ahmed Khanday of Hugam area of Srigufwara.
A private car was also damaged after a tree uprooted by strong winds fell down on it in Roohu area of Anantnag district in South Kashmir. The swift car was parked in the area when it got damaged.