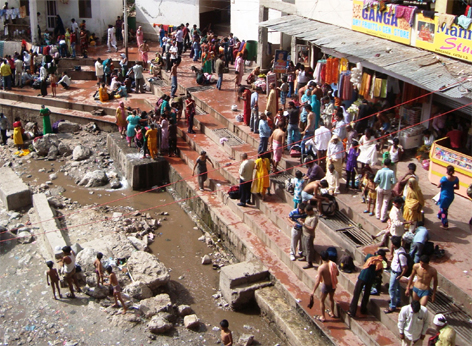 Those who have scant regard for protecting and preserving environment and not restraining themselves from polluting the air, the water and the places around, should be brought to justice in case we have to leave something behind in some living form than what levels thereof we bequeathed from our elders. It is a travesty that at each and every step, there should be the need of strict but unavoidable long arms of law where we, as responsible patriotic citizens on our own, should take the lead and protect our rivers, water bodies, air and the environment. When it is the issue concerning a place as sensitive as Katra town in Jammu, how can some hoteliers afford to have discharge of the sewage from their hotels into the nearby holy Ban Ganga? Apart from flouting environmental and pollution related norms, the sanctity and religious feelings towards Ban Ganga is thus grossly undermined and violated and if anything is kept above every consideration, it is pure commerce. The travesty is that it is not in respect of a hotel or two but as many as two dozen of such defaulting hotels are on the radar of the Jammu and Kashmir Pollution Control Board for directly discharging the sewage from their hotels into the rivulet. That is purely unacceptable.
It is only in the fitness of things that the District Administration Reasi has acted promptly by sealing three of such hotels following the matter having been brought into the notice of the District Magistrate by the Pollution Control Board. In fact, there should be periodical surprise audits conducted by the Jammu and Kashmir Pollution Control Board of such establishments and provisions of Water (Prevention and Control of Pollution) Act 1974 and Air (Prevention and Control of Pollution) Act 1981 need to be strictly enforced. It is not that repeated notices were not served on the concerned hotels in addition to being informed verbally by the authorities about the sensitive issue of polluting the waters but continuous non adherence to and non compliance with the instructions and no response to show cause notices by these defaulting hoteliers finally landed them in the otherwise avoidable situation of the last resort by the responsible administration.
In fact, lessons from the nature in most unpleasant form though, even need to be learnt, as not entirely out of context, the forced lockdown of country including Jammu and Kashmir in response to fighting the COVID-19, has given some respite to lessening of the pollution on roads and in rivers, birds are seen and heard chirping and perhaps trees are ‘breathing’ and giving their output of oxygen more than before the forced lockdown. Well, that cannot be the case except in abnormal unfortunate situations in a living, moving and busy in routine activity societies but nature is really exasperated and feeling not coping with its levels of violation on account of recklessness by and greed of most of us. Before nature teaches us in more harsher ways to behave with it properly, it is advisable to respect it as much as we can and in each and every form. We are tourism centric UT and have to be over cautious for our own selves and in our own interests.
Sewage Treatment Plants (STPs) are a must to be around those hotels and also mandatorily to be in functional mode and they cannot operate without that and permissions for such constructions should be given only after verifying the plans of occupancy projections of such establishments. It is suggested to and is thus advisable for those hotels and Guest Houses in Katra town which are currently on the radar of the JKPCB, to immediately comply with the requirements for treating sewage from their establishments lest their fate could be similar to the three defaulting ones.