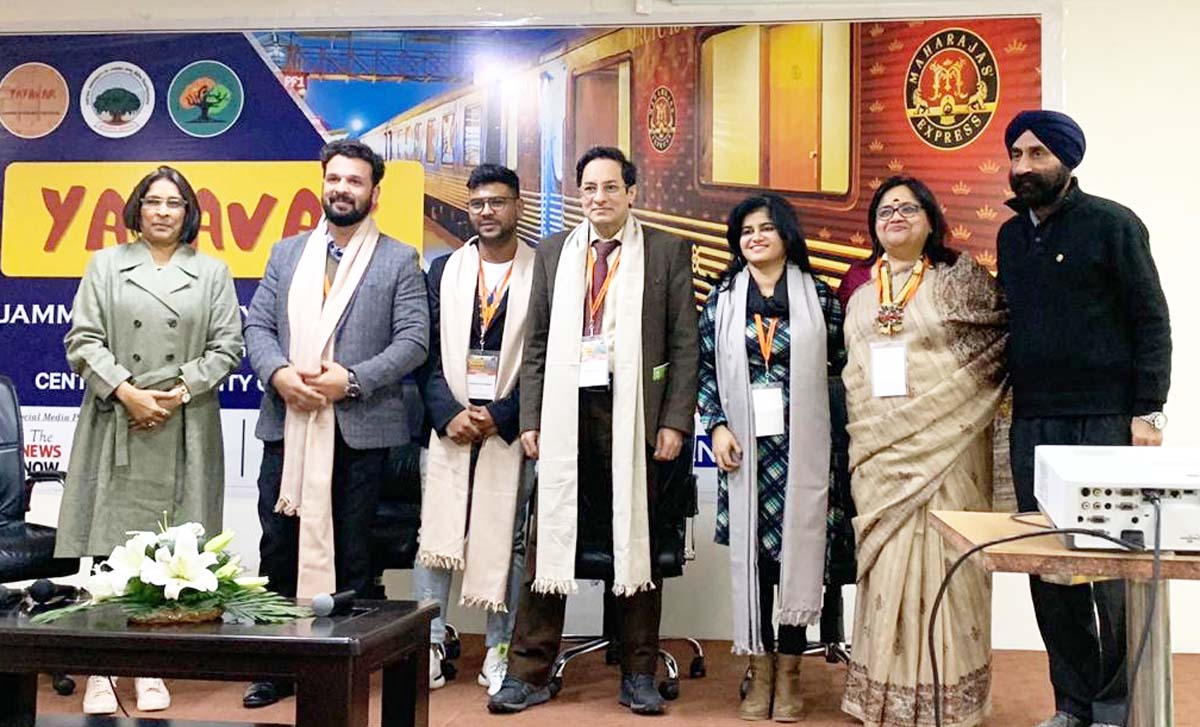 Abha Jha
The City of Temples marked its unprecedented majesty with its maiden Literary- fest YAYAVAR on 14th Dec 2019 pioneered by acclaimed author, and Filmmaker Nupur Sandhu in confederation with Central University of Jammu.
Betwixt a historic transition in the status quo of the city as Union Territory it was an opportune time to connect the city with rest of the India and revitalize its own literary and regional culture which had been affluent though since the time immemorial yet extraneous to its own people in the other part of the country. Being the first woman ambassador of Jammu at Asian Voluntary Summit and a connoisseur of literature and art Nupur Sandhu with her illustrious team materialized her ambitious dream of bringing Jammu city to the limelight through its inaugural MULTI-LINGUAL LIT-FEST YAYAVAR which turned out to be a huge success meeting out its all objectives.
YAYAVAR is a Hindi word which augurs a feeling of being pulled towards exotic. A person can be Yayavar with an yearning for offbeat places and experience a new way of life. YAYAVAR as a lit-fest was a clarion call to all Yayavars (Wanderers) to experience impeccable exotica of Jammu and satiate their literary and artistic palate.
YAYAVAR witnessed a conclave of authors , poets, artists, bloggers, media squad, policy makers, eminent speakers and bibliophiles from across the country on a single rostrum with their diverse and insightful perspectives expressed multilingually. The festival kick started with invocation of Goddess Saraswati by lamp lighting ceremony followed by the inaugural speech of Festival Director Nupur Sandhu who extended her warm welcome to the literati. With Key note Address by Dr. Vandana Sharma on Literati versus Twitterati, the contemporary literature and its trend was accentuated. A picturesque and breathtaking Kathak performance by International artist Sanchita Abrol was a dance drama from Nupur Sandhu’s popular novel NUMI:The Guarded Loop depicting the theme of YAYAVAR. The fest glittered with IPS Danesh Rana’s talk with Sunny Dua on the novel ‘Red Maize’, Sudeep Ranjan Sarkar’s talk on ‘ Cinema as an amalgamation of literature and Art, Anshuman Jamwal’s captivating talk on Poetry and power of unity and Nalin Gupta’s ‘Fighting all odd of Dyslexia’ and Anirban Bhattacharya’s ‘Always have dreams in Instagram Filters’, Meghna Shekhar’s ‘A Tsunami survival, Informal Transcendence’ were worth audiences encomium. Poetic flavor was dredged in by Jaspreet Kaur Falak, Hariender Cheema , Eisha Gohil, Pankhuri Aggarwal. Neil D’silva scrutinized Bestselling Author’s Mind and hit the horror nerve through his talk inviting audiences adulation. Symposiums on ‘Deciphering life, making symphony’, ‘Love you Zindagi’, ‘Dogri literature Retrospect and Prospects’ , ‘Love life and Mystery in narration’ were garnished by the powerful oratory of budding and established authors namely Minal Arora , Payal Jain, Jasbeer Singh, Vinayak Pattar, Abhirup Dhar, Dr. Kanwalpreet, Dr. Sandeep Sufi, O.P Vidyarthi, Dr. Jas kohli, Runjhun Noopur and Ashish Khumbre with moderators Akriti Jamwal News Now, Shwetima Jamwal, RJ Radio Mirchi, Surjit Hosh Cultural officer, Rajat Vohra, Dr. Nasir Faried Butt respectively stole the show because of its enriched content.
Panel discussions on sensitive yet significant topics pertaining to the region by Aarti Tikko Singh (a Senior Journalist), Commodore D.S Sodhi (Naosena Medal), David Devadas ( Senior Journalist and author) titled as ‘ IN SEARCH OF FUTURE- THE STORY OF KASHMIR’ moderated by Ruchhita kazaria brought forth a candid and revelationary regional concerns. Bashir Assad’s ‘A conspiracy in silence, let’s know about K-files’ moderated by Jasleen Kaur were a thought provoking talk. Another Panel discussion probing the Behavioural and Motivational similarities in serial killers by Retd. IG Jhonny William, Anirban Bhattacharya, Dr. Sudeep Ranjan Sarkar moderated by Rajat Vohra (News Now correspondent) delved deeper into the psychological realms of serial killers. Power Point presentations on ‘Unique and lesser known version of Ramayna’ by Utkarsh Patel and ‘ What happened to Subhash Chandra Bose?’ by Anuj Dhar was icing on the cake. The whole show was managed by the volunteers under the leadership of Arush Mahajan
YAYAVAR culminated on high note with a profound address by Prof. Ashok Aima , Vice Chancellor of the Central University of Jammu followed by the valedictory speech by , Nupur Sandhu. The student community from colleges and schools who visited the fest were enthralled and enthused with the entire on goings.
Audience was from different schools and colleges of Jammu region.
The first ever essay of calling attention to the less traversed region of India from the literary and creative aspect, received an incredible boost not only from literary coterie but also from the local people who were rendered rare opportunity to change the persisting outlook of visitors to the beautiful and pious city with prolific history of art and literature. According to the organizers the success of the event paved the way for more improvisations and aspirations in the subsequent fests from next year offering platform to more budding authors and veterans.
(The author is Freelance Journalist.)