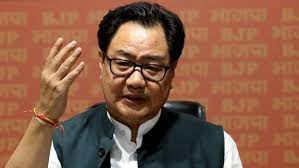 Ansh Chowdhari
Notwithstanding a few factual inaccuracies that the article written by Kiren Rijiju has, the moot point that I’m going to address stays the same i.e., the inconsequential nature of the debate surrounding Pandit Nehru’s role in J&K’s accession. Paradoxically, 75 years hence, this debate appears bigoted and out of context, given that we are trying to analyse Nehru, Maharaja, and the British with a benefit of hindsight which is an added contextual advantage that no one is talking about.
Despite the aggravating circumstances that accompanied J&K’s accession, the state ultimately pivoted into the Indian basket once and for all. But apparently a certain dispensation cherry picks certain incidents from the past to brandish a particular individual as a villainous figure in the Indian consciousness-Nehru, in this case, and make that a be-all and end-all goal of their ideology, then this entire exercise appears facetious and vindictive. There’s no doubt that Nehru -Maharaja duel did lead to certain shortcomings but do these instances have any sacramental value, especially when we know that this distrust was mainly exacerbated by the duo of Sheikh-Nehru, wherein the latter granted the former a long rope which he later used to cull his opposition, while Maharaja remained a figurative piece of a powerless pawn in this matrix. This has seemingly polarised the issue way beyond its present significance. Not to mention, the fraught lines it has created between the reputed political personalities.
At this juncture when J&K is having a tough time struggling under a bureaucratic regime, sans elected representatives, the narrative that is being brewed from Delhi is fanning passions to reclaim its share of relevance in the scheme of things, which otherwise remains an entrenched position of a particular political ideology and their leaders. Strangely, this ideational relevance gets hazy in the UT where different people perceive the accession differently. When this idea gets juxtaposed with the gamut of different narratives emanating from the UT, the picture becomes exceedingly murky. It’s, therefore, necessary that these academic questions must be left to scholars and historians who can come out with their varied interpretations regarding those acts placed within a specific time-space contexts. And frankly, that has largely been done. While Prem Shankar Jha’s arguments buttress the present narrative, Alastair Lamb’s goes against it. The academic debate regarding subtle nuances surrounding the accession are the ones that gives a profile to the larger issue.
Hence, it shows when government advertently tries to push a certain farrago of stories aimed to address the larger audiences primed and conditioned to accept every state-sponsored dictum as the gospel truth. The present government is not different, alas, a personal angle has erupted here which makes things awry to a certain extent. The salvo of accusations that Congress levelled against the Maharaja was followed by a fulminating retort by Dr. Karan Singh which created a passing match, the trinkets of which are still being discussed online. All these events have indicated that politicians by employing ‘Foucauldian discourse’ like analysiscould mould facts suiting their interests and priorities. It’s the public that must remain careful to dissect these arguments for their own benefit.
A careful appraisal of these notions has led me to believe that come what may, the past, at best can only be a beacon for the future. It can never superimpose the present realities, howsoever grumpy. Right now, what concerns me the most is the fact that why J&K has been belied and divested of its status as a federal unit of the Indian union. I wonder that why shouldn’t we discuss about the cancellation of three major recruitment examinations by JKSSB.I think that we must ask why the Committee formed in the wake of the stampede incident at Mata Vaishno Devi hasn’t made their report public. As informed citizenry it’s our duty to keep our administration on tenterhooks by keeping them responsible and accountable. Hence, creating falsities by placing our bets on emotive topics that broach issues considered anachronistic is not going to solve our daily predicaments.
Furthermore, this debate provides a chance, particularly to those Jammuites, who are averse to reading, to develop this habit, so that they can evaluate these facts objectively and without bias or malice. J&K’s modern history is a rollercoaster ride. There are no straight answers to any question. Therefore, we ought to jettison outdated ideas from feudal times and enriching ourselves by immersing within an intellectual and democratic framework where we can discuss, deliberate, and debate regarding new age ideas which can take our UT on a path of progress with some tangible outcomes on the ground.