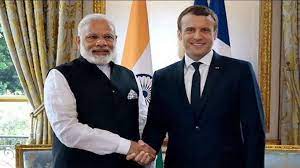 UNITED NATIONS, Sept 21: Prime Minister Narendra Modi was right when he told Russian President Vladimir Putin that this is not the time for war, French President Emanuel Macron has said while addressing the general debate at the 77th session of the UN General Assembly.
“Narendra Modi, the Prime Minister of India, was right when he said the time is not for war. It is not for revenge against the West or for opposing the West against the East.
It is the collective time for our sovereign equal states to cope together with challenges we face,” said the French President on Tuesday. Admonishing the countries that remain silent, Macron, in his 30-minute speech, called on them to no longer sit on the fence.
“Those who remain silent today, despite themselves or secretly with a certain complicity, are serving the cause of a new imperialism, a contemporary cynicism that is destroying the world order,” he said. Modi’s comments were made last week during a bilateral meeting with Putin on the sidelines of the SCO Summit in Samarkand.
Stressing on the path of dialogue and diplomacy, Modi told Putin, “I know that today’s times are not for war. Democracy, diplomacy and dialogue assure us on how to progress on the path of peace, we’ll get an opportunity to discuss that.
I will also get an opportunity to understand your viewpoint.” The Prime Minister reiterated his call for an early cessation of hostilities and the need for dialogue and diplomacy in the context of the ongoing conflict in Ukraine.
Meanwhile, External Affairs Minister Dr S Jaishankar has held discussions with Macron on the conflict in Ukraine and its implications during a high level cross-regional grouping here.
“Thank President Emmanuel Macron of France for hosting a high level cross-regional grouping today in New York. Discussions focused on the conflict in Ukraine and its implications for the Global South. Conversations also covered the salience of G-20 in these challenging times,” said Jaishankar in a tweet. (UNI)