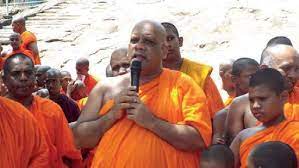 Colombo, Oct 4: A prominent Buddhist monk has accused both the Tamil Tigers and the JVP, Sri Lanka’s largest leftist group, of destroying the country.
The Chief Incumbent of Mihintale Rajamaha Vihara, Dr. Walawahengunawewe Dhammarathana Thera, said politicians in general were also to blame for Sri Lanka’s decline since independence in 1948, the Daily Mirror reported on Tuesday.
Delivering a religious sermon, he said the rulers were enjoying luxuries and were overfed while the ordinary people were suffering from malnutrition.
?The individuals who have been branded as destroyers of the economy would attempt to be patriots and hoodwink the people. I request the people to reject them and not to be misled. The LTTE terrorists and JVP both unleashed a wave of violence that ruined the country,” he was quoted as saying.
“It is the duty of the President as custodian of the country to uplift and protect the people instead of declaring high security zones to protect defrauders, he added.
(UNI)