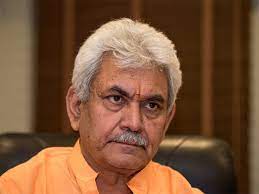 In the wake of the targeted killings that have taken place in Kashmir in the month of May this year, lot of security concerns have been raised, particularly in the context of Amaranth pilgrimage. While these concerns are being effectively addressed at the security levels, a welcome intervention has been made by the Lieutenant Governor Manoj Sinha to involve the political class of Jammu and Kashmir. In a meeting called by him on 29th June, there were consultations with the leaders of the major political parties. The meeting that lasted for one hour, information was shared by the LG about the arrangements made for the yatra and suggestions were sought from the participating leaders about its smooth conduct. As indicated by the Lieutenant Governor, this is the beginning of the process of consultation and there would be another meeting to assess the situation quite soon. More importantly, the LG also indicated more such process of consultation with the political parties around other issues related to development and peace process.
This is a good initiative of involving the political stakeholders in the crucial decision making process. In the context in which the State/UT has been without a political set up for almost four years , this marks a significant change in the process of governance. Though this cannot at all be seen as a substitute for an elected government (and for that matter, the ideal situation would be having a government based on people’s mandate) yet, this small step is very important in providing a relevance to the political class. In the post-August 2019 situation, the political class was not only marginalised but held responsible for all the problems faced by the state in pre-2019 period including those related to separatism, corruption, inefficiency and lack of development. It was only the Prime Minister’s meeting with the leaders of all political parties in June last year, that the role of the mainstream parties was acknowledged. It was after this meeting that the tensions that were felt between the political parties and the national government were eased. The direct impact of this meeting was that even the most reluctant political leaders became ready to participate in the delimitation process, albeit on PM’s request. This meeting had generated a hope that the mainstream political leaders will continue to be engaged and they will be able to come out of wilderness and contribute their bit in bringing normalcy in Jammu and Kashmir.
The meeting called by the LG assumes importance in this context of engaging the political class and acknowledging their relevance in the larger process of governance and administration on the one hand and maintaining security and bringing about peace, on the other. On the issue of the Amaranth Yatra, the role of political class becomes important since they provide a linkage with the people and their commitment to make it a success surely reflects the commitment of the larger society in the process. This yatra, as the LG and the political leaders emphasised, represents the composite culture of Jammu and Kashmir and has been traditionally taking place with the active cooperation of the local people. And it is with their continued support that it can be performed successfully even now.
The meeting also assumes importance in the context of the changing situation of militancy in Kashmir and the call by veteran security experts about involving the civil society and the political class in dealing with the situation, along with the security forces. In the wake of selective killings of the minorities, two retired security veteran who have been involved in maintaining security in J&K during the period of their service – Viz. Lt. General D.S.Hooda and Lt. General Syed Ata Hasnain – have insisted on going beyond the security approach. As per the assessment of General Hasnain, the acts of violence as reflected in recent acts of targeted killings are small but the cumulative effect is huge. He therefore, calls for invigorating the political and social domain. In his opinion, there is a need to involve the media and prominent members of society from all faiths to isolate the radical elements. As per General Hooda, it is war of narrative and to win the war, it is important to go beyond the security approach. In his opinion ‘people must be at the heart of finding some solution’. He therefore makes a case for a genuine outreach to civil society.
What is more important, both General Hasnain and General Hooda have asked for activating the political domain. General Hasnain notes that the political space has dwindled in Jammu and Kashmir and even though DDC elections have taken place, the mainstream parties have been marginalised with no other political dispensation to take their place. General Hooda has also referred to the political vacuum and has noted that if the vacuum is not filled by political voices, it is going to be filled in by extremist noises. Since the local politicians have the popular base, there is a need for coopting them in the fight against terrorism.
With the relevance of the political class being acknowledged not only for fighting the elections and providing a competitive politics, but also in tackling radicalism and extremism, the recent meeting of LG with the leaders of the mainstream parties makes a good beginning. In any case, political parties in a democratic system are needed to be seen not as problems but as solutions. These are the most important bridges between the government and the people. Grounded among the people, these parties have their fingers on the nerves of the people and not only provide the most important feedback to those in power but also provide panacea during various difficult situations.
(Feedback: rekchowdhary@gmail.com)