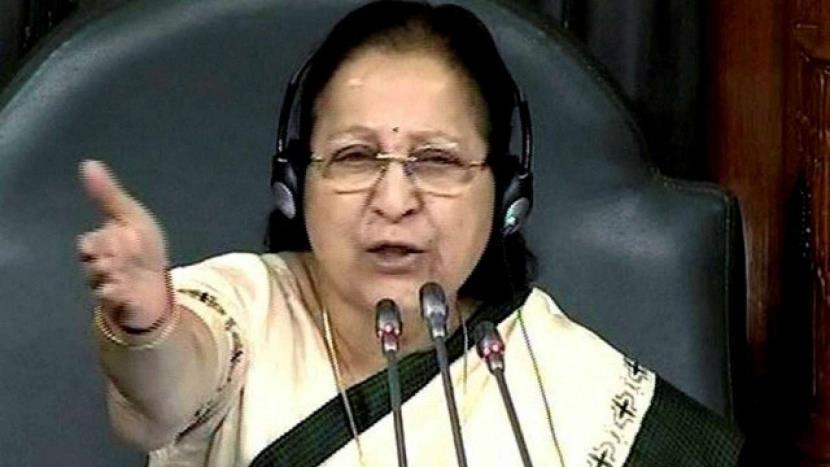 NEW DELHI, Dec 20:
Miffed over MPs holding placards inside Lok Sabha and creating ruckus, Speaker Sumitra Mahajan has categorically told leaders of all parties that the image of the House is taking a big hit and has called a meeting of the Rules Committee to look into the matter, sources said Thursday.
The Lok Sabha proceedings were disrupted for the seventh consecutive working day on Thursday amid sparring between members of various parties and a ruckus being created by various leaders.
In a meeting with leaders of all parties, including the Congress leader in the House Mallikarjun Kharge and Union Parliamentary Affairs Minister Narendra Singh Tomar, Mahajan conveyed her displeasure over continuous disruptions in functioning of the Lower House of Parliament, Lok Sabha sources said.
The speaker told the leaders that the image of the house is taking a hit and it is being seen as a place where only ruckus happens, where nothing can be asked or listened, the sources said.
Keeping the current situation of the House in mind, Speaker has called a meeting of Lok Sabha’s Rules Committee, which she herself heads.
The Rules Committee acts as an advisory body to her for framing and amending rules for regulating and conducting the business in Lok Sabha.
This committee considers matters of procedure and conduct of business in Lok Sabha and can recommend necessary additions or changes to the rules.
The committee has members from almost all parties, while Tomar along with two Ministers of State for Parliamentary Affairs — Vijay Goel and Arjun Ram Meghwal — are its special invitees.
The ongoing winter session, which is the last full-fledged session of the BJP-led NDA government is witnessing continuous adjournment of the house for last seven days on several issues.
The session has been marked with members of various political parties, holding placards and shouting slogans related to their respective demands, entering well of the House and trying to disrupt the proceedings, resulting into repeated adjournment of the proceedings. (PTI)