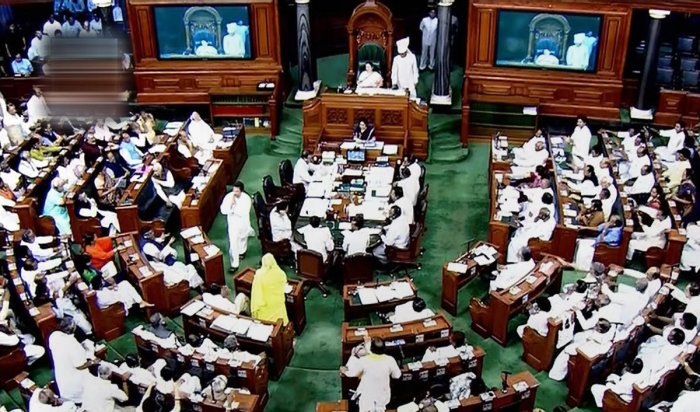 NEW DELHI: Lok Sabha proceedings were adjourned till 6 pm, the fourth time on Friday, following ruckus by the Opposition over certain remarks by BJP members.

The ruckus happened during the introduction of the Taxation and Other Laws (Relaxation and Amendment of Certain Provisions) Bill, 2020.

After speaking for sometime, Finance Minister Nirmala Sitharaman said that her deputy Anurag Singh Thakur will talk about PM-CARES Fund.

Opposition members raised concerns about the fund and while speaking, Thakur alleged that the Congress had misused the PM Relief Fund.

Speaker Om Birla warned members against standing up and speaking, saying that then they would be suspended from the House.

As the ruckus continued, Birla adjourned the proceedings for 30 minutes till 4.20 pm. After the House reassembled, there was uproar again and the Speaker adjourned it till 5 pm.

As soon as the House assembled at 5:30 pm, Rajendra Agrawal, who was in the chair, requested the protesting members to sit in their places for their own safety as well as for the safety of others in view of the COVID-19 pandemic.

Agrawal also sought cooperation from them and made a plea to them to allow the House to function. (AGENCIES)