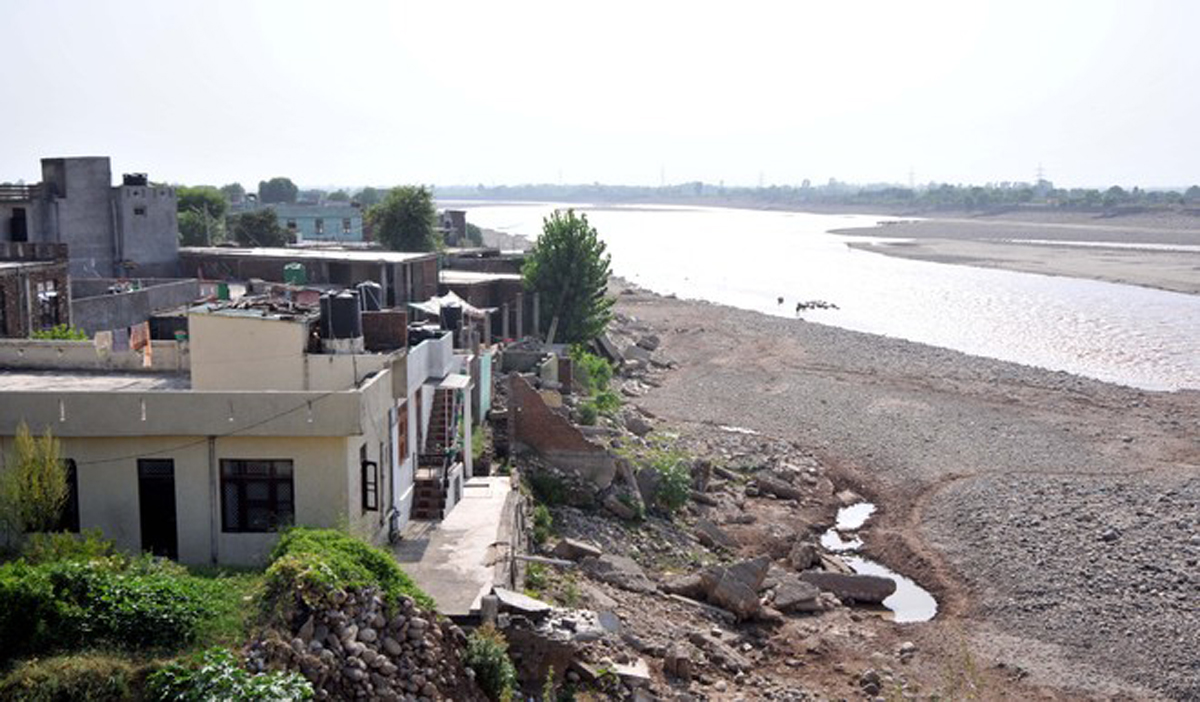 JAMMU, Oct 30: In utter disregard to the repeated directives of the highest court of the State, several Government agencies have been soft-paddling on removal of illegal constructions and encroachments on the State land near bed of River Tawi from Nagrota to Phalain Mandal even after preparation of lists of violators and drawing of calendar of action. Due to this, nobody knows when the concern of the people of Jammu will be completely addressed and sacred river is saved from its further plunder.
In the Public Interest Litigation (PIL) titled Ashish Sharma and Another Versus State of J&K and Others, the Division Bench of the State High Court passed numerous directions on July 29, 2016, November 17, 2016, December 28, 2016, February 6, 2017, July 17, 2017, August 25, 2017, September 25, 2017 and November 1, 2017 respectively in order to put a full stop on encroachments and illegal constructions on State land near River Tawi bed.
However, the directions were not strictly complied with by any Government agency much to the disappointment of all those who want to protect the river bed from shrinking further due to the activities of land mafia in connivance with the functionaries of concerned departments.
Inaction on the part of concerned agencies was notwithstanding the fact that on the directions of the Division Bench of the High Court even encroachers were identified, their lists were prepared after exhaustive exercise and even shared with the highest court of the State.
Expressing anguish over dilly-dallying approach in removal of encroachments and preventing more such illegal activities as pointed out by Monitoring Committee appointed by it, the Division Bench of the High Court on July 20, 2018 passed fresh directions to the Divisional Commissioner Jammu and other concerned agencies like Jammu Development Authority, Jammu Municipal Corporation and Irrigation and Flood Control Department to forthwith start removing/dismantling the illegal constructions and encroachments whether residential or commercial which have been made or still being made on the State land near bed of River Tawi right from Nagrota to Phalain Mandal.
On these directions of High Court, a calendar of action was drawn by the Divisional Commissioner and shared with all the concerned agencies for necessary action at their end. However, anti-encroachment drive has yet not picked up momentum even over three months after the fresh directives of the High Court, official sources told EXCELSIOR.
“Such a drive has so far been carried out in Sidhra area only and other areas right from Nagrota to Phalain Mandal have yet not received the attention and encroachers are still occupying the land without any fear of law”, sources further said, adding “several illegal structures on the State land along River Tawi bed near 4th Tawi Bridge are the testimonies of the non-serious approach of the concerned authorities”.
Had there been enough seriousness on the part of all the concerned authorities these encroachments and illegal structures would have been removed soon after the judgment of the Division Bench in PIL titled Balbir Singh Versus State and Others delivered on February 12, 2016 wherein concern was also expressed over encroachments along River Tawi bed.
According to the sources, Parks and Gardens Department has yet not been handed over any land along River Tawi although there was explicit direction from the highest court of the State that retrieved land shall be utilized for beautification purpose. “This has also cleared established that anti-encroachment drive has yet not gained the momentum”, they added.
“It is a matter of serious concern that earlier blind eye was maintained towards illegal activities on the State land near the bed of River Tawi and now drive is not being geared up even after repeated directions of the High Court”, sources regretted.
Some officers in the administration when contacted said that focus of the entire machinery was on holding Urban Local Bodies and in the coming days drive will be intensified. However, sources have dubbed this as unfounded ground and said, “no excuse can justify inaction on more than half a dozen directions of the High Court on the issue pertaining to bringing an end to the plunder of sacred River Tawi”.