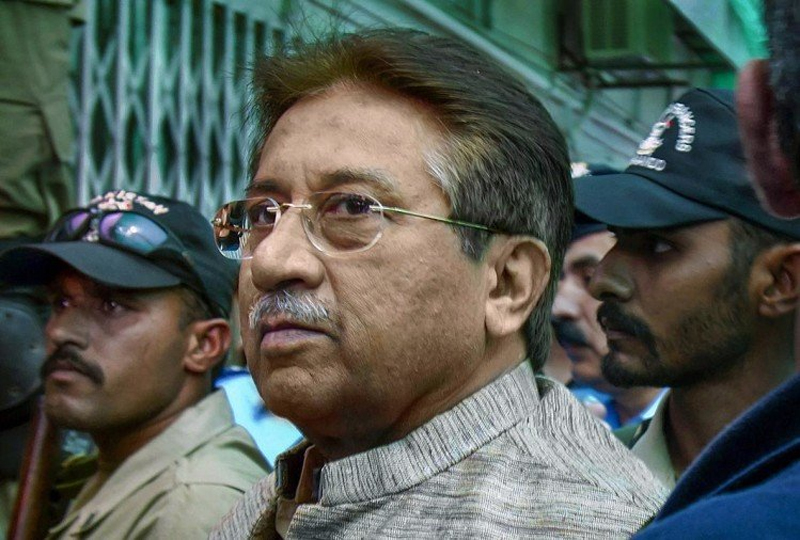 LAHORE, Jan 13:
The Lahore High Court on Monday reserved its verdict on a set of petitions filed by Pakistan’s former military dictator General (retd) Pervez Musharraf, who has been sentenced to death for high treason.
A special court of Islamabad on December 17 last year handed down the death penalty to the 74-year-old Musharraf after six years of hearing the high-profile treason case against him. The case was filed by the Pakistan Muslim League-Nawaz (PML-N) government in 2013.
In his petition, Musharraf has asked the Lahore High Court (LHC) to set aside the special court’s verdict for being illegal, without jurisdiction and unconstitutional, while also seeking suspension of the verdict till a decision on his petition was made.
The LHC on Monday reserved its verdict on a set of petitions filed by Musharraf challenging multiple actions against him, including his conviction for high treason, the establishment of the trial court that convicted him and filing of the original high treason inquiry against him by the government, the Dawn newspaper reported.
The verdict is expected to be announced later on Monday, it quoted Musharraf’s counsel Azhar Siddique as saying.
A three-member full bench of the LHC comprising Justice Syed Mazahar Ali Akbar Naqvi, Justice Mohammad Ameer Bhatti and Justice Chaudhry Masood Jahangir took tup the former president’s petitions last week.
On Friday, Justice Naqvi asked the federal Government to submit a summary on the formation of the special court and had directed the state’s lawyer to present arguments on Monday, the report said.
As the court resumed hearing Musharraf’s pleas on Monday, Additional Attorney General (AAG) Ishtiaq A Khan, appearing on behalf of the federal government, presented the order and record of the formation of the special court.
Khan said that the matter of forming a case against Musharraf was never included in the Cabinet agenda.
“It is the truth that the formation of the special court to hear the case against Musharraf was done without Cabinet approval,” Justice Jahangir was quoted as saying in the report.
During the hearing on Friday, the LHC had posed questions regarding the legality of the treason case and the formation of the special court that conducted the trial and had handed Musharraf the death sentence.
“This was history’s most important matter; can the cabinet discuss it without it being an agenda item?” the bench had asked.
Musharraf ruled Pakistan from 1999 to 2008 and lives in Dubai in self-imposed exile. The PML-N government had filed the treason case against the former army chief in 2013 over the imposition of an extra-constitutional emergency in November 2007, which led to the confinement of a number of superior court judges in their houses and sacking of over 100 judges. In August 2008, he finally resigned in the face of impeachment proceedings by the new governing coalition, going into exile until his ill-starred homecoming in 2013, exiling himself once more three years later. (PTI)