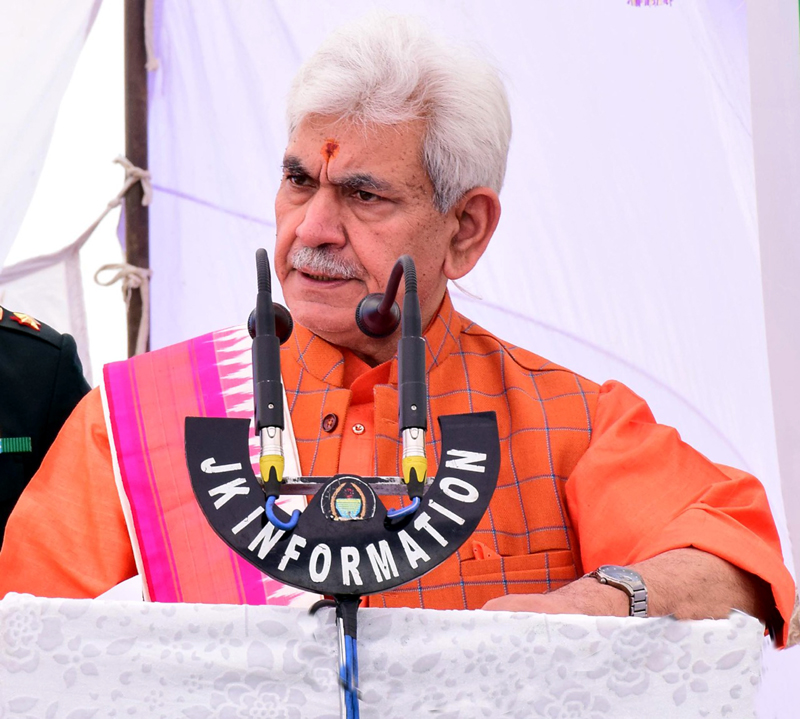 PM to preside over industrial investment ceremony in March

New dawn will usher in J&K under Modi

Sanjeev Pargal
JAMMU, Feb 15:  Lieutenant Governor Manoj Sinha today took a dig at those questioning bravery of Armed Forces including surgical strikes conducted by the Indian Army inside Pakistan in September 2016 and expressed hope that God will give good sense to such people so that they can have better thought process.
Sinha said those protesting against draft report of the Delimitation Commission should file their objections in written form.
He said this in a brief media interaction on the sidelines of inauguration of power projects at Bajalata near here.
“No one has an ounce of doubt about the Indian Army’s bravery,” the Lieutenant Governor said.
Referring to Telangana Chief Minister K Chandrashekhar Rao’s recent statement seeking proof of surgical strike against Pakistan in September 2016, Sinha, without naming anyone, said: “May God five good sense to such people so that they can have a better thought process about the country and the Army”.
India had carried out surgical strikes inside Pakistan in September 2016 following fidayeen attack at Uri and killed a number of militants in the camps. Following surgical strikes, Congress, Aam Aadmi Party and certain other parties had sought evidence of the strikes from the Government.
Recently, KCR revived the debate by seeking proof of surgical strikes.
“Nobody has any doubt about the bravery of the Armed Forces who are enjoying respect for their work which they have done over the past 70 to 75 years. The whole country is proud of them,” the Lt Governor said.
“Bhagwan aise Logon Ko Sadbudi De Jo Desh Aur Sena Ke Bare Mein Achche Vichar Unko Prapt Hosake (God give good sense to such persons so that they have good ideas about the country and the Army),” Sinha said reacting to Rao’s statement.
On protests and filing of objections by Associate Members over the draft proposal of Delimitation Commission setup to redraw the Assembly seats of the Union Territory, he said India is a democratic country where everyone is free to speak.
“Election Commission is a constitution body and the Delimitation Commission works in accordance with the Delimitation Act enacted by the Parliament. We have a democracy and a constitution which allows everyone freedom to speak,” he said.
Sinha said the Associate Members, if they had any objection, should file it before the Commission and then the report will come in public domain and if an ordinary person feels there is a mistake, he should also raise his objection.
“This is the beauty of our democracy,” he said.
Meanwhile, addressing the function after inaugurating 20 power projects at Bajalta, Sinha said Prime Minister Narendra Modi will preside over the groundbreaking ceremony of the launch of industrial investments worth Rs 20,000 to 25,000 crore here next month.
He sought cooperation of the people to the efforts of his administration to usher a new dawn of peace, prosperity and development under the leadership of Modi in the Union Territory.
“Someday back, I have requested the Prime Minister to preside over the groundbreaking ceremony of the launch of industrial investment to the tune of Rs 20,000 crore to Rs 25,000 crore. He has asked us to complete the formalities and expressed willingness to be among the people of Jammu and Kashmir to preside over the function by March,” the Lt Governor said.
Lauding Union Home Minister Amit Shah for the industrial investment scheme for Jammu and Kashmir, Sinha said an industrial investment worth Rs 25,000 crore was expected but “the scheme is such that we are confident that there will be an investment of over Rs 70,000 crore in the next couple of years for which we need electricity and land.”
He said the Government land available with the Industries department is being allotted to investors who have deposited the fee and submitted the detailed project reports and the process is likely to be completed by February 20 in the run up to the groundbreaking industrial investment ceremony.
“A new dawn will usher in J&K under the leadership of Prime Minister… the industrialists have shown their interest and a lot of jobs will be generated. We have made necessary changes in our laws while Rs 1 lakh crore worth road and tunnel projects are in progress to provide modern infrastructure,” the Lieutenant Governor said.
Seeking cooperation of all sections of the society, he said, “You have to support the Government efforts to make the atmosphere conducive. I assure you of economic development, progress and social justice.”
He said the Government is fulfilling the aspirations of all sections of the society and “I am saying it with confidence that we are moving forward to ensure accountability, transparency and responsive administration.”
Terming electricity a prerequisite for economic development, Sinha said J&K has a lot of capacity for power generation which was not fully tapped over the years, while the distribution and transmission system was also in a very bad shape.