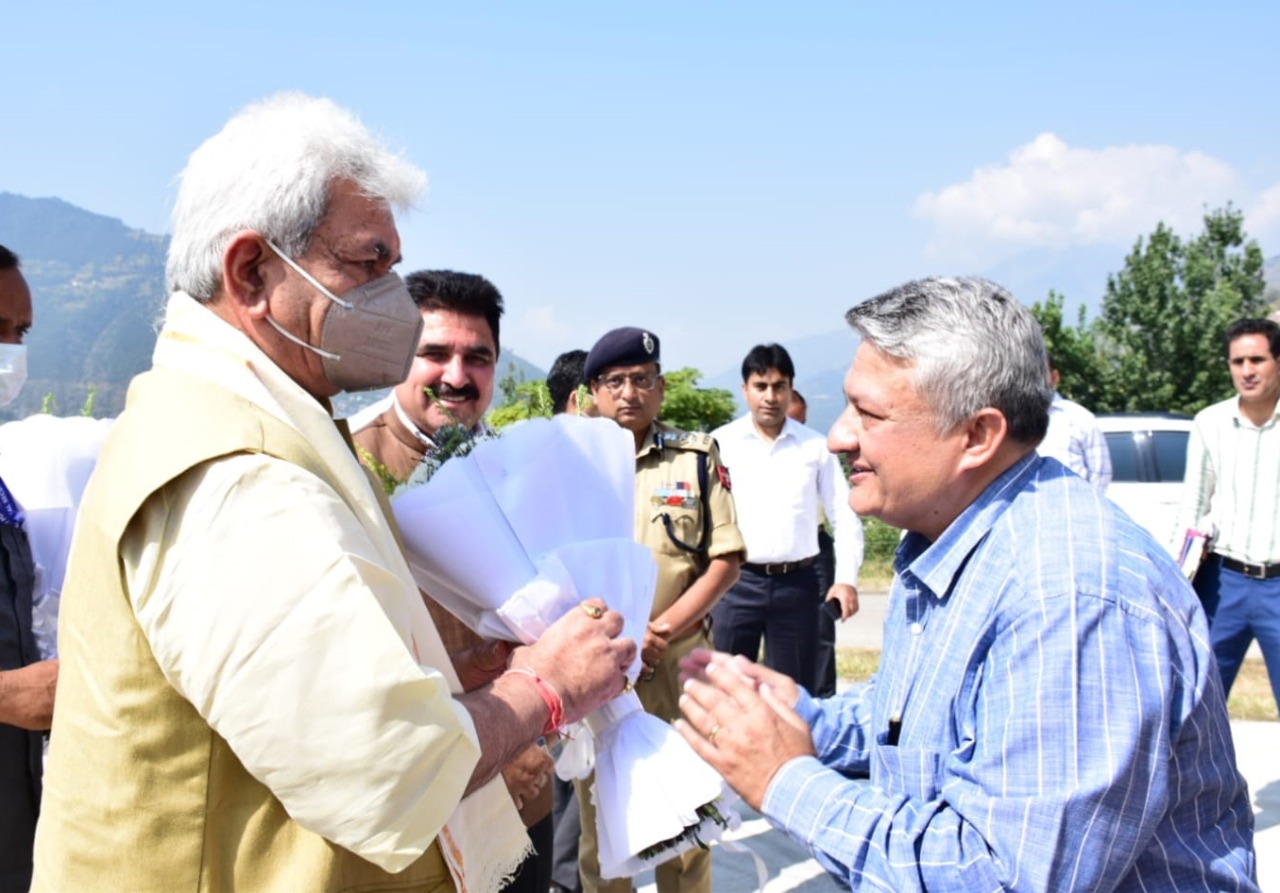 Doda, September 15: Lieutenant Governor Manoj Sinha on his visit to Doda, chaired a meeting to review the implementation progress of Central & UT Government schemes and mega developmental projects on the ground in the district.
After Poonch and Kishtwar, this was the third District visit of the Lt Governor in three days.
The Lt Governor inaugurated newly constructed Government Degree College Kilhotran worth Rs 11.99 cr and 125 meters motorable bridge over river Chenab including 7.30 KM approach road at Sui Gwari, Doda completed at a cost of Rs 14.85 cr.
The Lt Governor also launched a dedicated portal for promotion of new ideas and innovation.
Lt Governor outlined a four-pronged strategy- speeding up infrastructure development, credit availability to youth & farmers, special impetus to the food processing industry and strengthening mechanism to provide basic amenities to all.
People-centered plans must target the last person in the queue in terms of service delivery and livelihood avenues. PRIs and district administration need to integrate plans and identify development activities that could be implemented through convergence, observed the Lt Governor.
The Lt Governor took stock of the interventions for enhancing farmers’ income and encouraged the use of modern agriculture technologies among the farming community. He asked the officers to encourage farmers for diversification and availing the benefits of schemes of UT government for mechanization, irrigation facilities and agriculture extension.
The Lt Governor said, Agriculture & allied sectors continue to serve and support economic activities for Doda.
Our emphasis is on the strengthening of Floriculture Cultivation especially marigold & lavender so that Doda can be benchmarked with the best in the country in terms of its competitiveness, observed the Lt Governor.
The Lt Governor directed the District Administration to prepare a comprehensive District Plan of agriculture and allied sectors in coordination with SKUAST. He further called for giving more focus on One District One Product so that export of the agricultural products shall be increased in a considerable manner having a direct impact on the income of farmers.
The Lt Governor sought a comprehensive report on the progress of key projects including GMC Doda, construction of medical College campus, residential quarters and teaching hospital; Widening of NH-244, High Altitude Medicinal Plant (AYUSH) at Bhaderwah; Government Degree College, Kastigarh; Multipurpose Indoor Sports Hall at Doda; Government Polytechnic Doda; 100 Bedded Hospital at Gandhoh and directed for ensuring the timely completion of the ongoing projects.
Regarding the prestigious mega project of NH-244, the Lt Governor directed the NHIDCL authorities to engage more manpower and machinery so that the project shall be completed under the fixed timeline. The Lt Governor also directed the authorities to take all the road safety measures along the National Highway by installing crash barriers, regular checking of vehicles, radium signage to prevent accidents.
On various ongoing road projects under CRIF, NABARD, Languishing and PMGSY, the Lt Governor directed the Forest department to resolve all the forest clearance issues in coordination with the concerned departments.
The Lt Governor announced the Thathri-Gandoh road as National Highway.
He directed the executing agencies to connect the pending habitations with road connectivity on priority. He also instructed the district administration to frame a District Employment plan for identifying the youth to be provided assistance under various government schemes, and also set the target of self-employment generation at each panchayat level.
While responding to the issue of shortage of teaching staff and doctors in the Government Medical College, the Lt Governor directed the Principal GMC to advertise all the vacant posts so that a chance shall be provided to the locals to get the opportunity to serve the people.
“Immediate steps should be taken to engage the doctors and teaching faculty for the best patient care and smooth functioning of the GMC,” the Lt Governor said.
Assessing the progress under Jal Jeevan Mission, the Lt Governor directed the Jal Shakti Department to motivate local and young contractors to participate in the tendering so that all the targeted schemes shall be executed on ground well in time.
The Lt Governor said that 4 Atal Tinkering Labs, 3 KGBV and 5 Girls hostels have been sanctioned and many other measures are being taken to strengthen the education sector.
Underlining the importance of Block Diwas and Thana Diwas, the Lt Governor directed all the officers from civil and police departments to ensure prompt redressal of people’s grievances.
Regarding digitisation of Jamabandies and distribution of land passbooks, the Lt Governor directed the concerned revenue authorities to ensure that the public visiting offices for registration shall not suffer due to unnecessary delays in the process. He further directed for the completion of digitization of land records and distribution of land passbooks within a set deadline.
The chair was informed about the achievements registered under CRIF, NABARD, PWD, District Capex, Languishing, Jal Jeevan Mission, assets created under MGNREGA, PMAY, SBM, KCC, PM Kisan, Poshan Abhiyan, digitization of Revenue records, Amrit Sarovar, PMGSY, Aspirational Block, Back to Village, Employment generation schemes; proposed Industrial Estates in the district, besides saturation of welfare and social security schemes.
Vishesh Paul Mahajan, Deputy Commissioner Doda, briefed the Lt Governor on the development scenario of the district and the efforts of the District Administration to ensure timely completion of the projects and reaching out to the beneficiaries under various government welfare schemes. He further informed about various district level measures in the pipeline to uplift the tourism and industrial sector, including Solid and Liquid waste management.
Total 1683 projects were completed under district capex in the last financial year, it was informed.
On the occasion, the Lt Governor distributed motorized tricycles for Specially-Abled Persons among beneficiaries and also inaugurated Sports meet for Senior Citizens.
Dhananter Singh Kotwal, DDC Chairperson Doda; Dr Arun Kumar Mehta, Chief Secretary; Nitishwar Kumar, Principal Secretary to Lt Governor; Mukesh Singh, ADGP Jammu; Ramesh Kumar, Divisional Commissioner Jammu; Sunil Gupta, DIG DKR range; Abdul Qayoom, SSP Doda, besides HODs and senior officers of District Administration and concerned departments attended the meeting at Conference Hall, DC Office Complex, Doda.