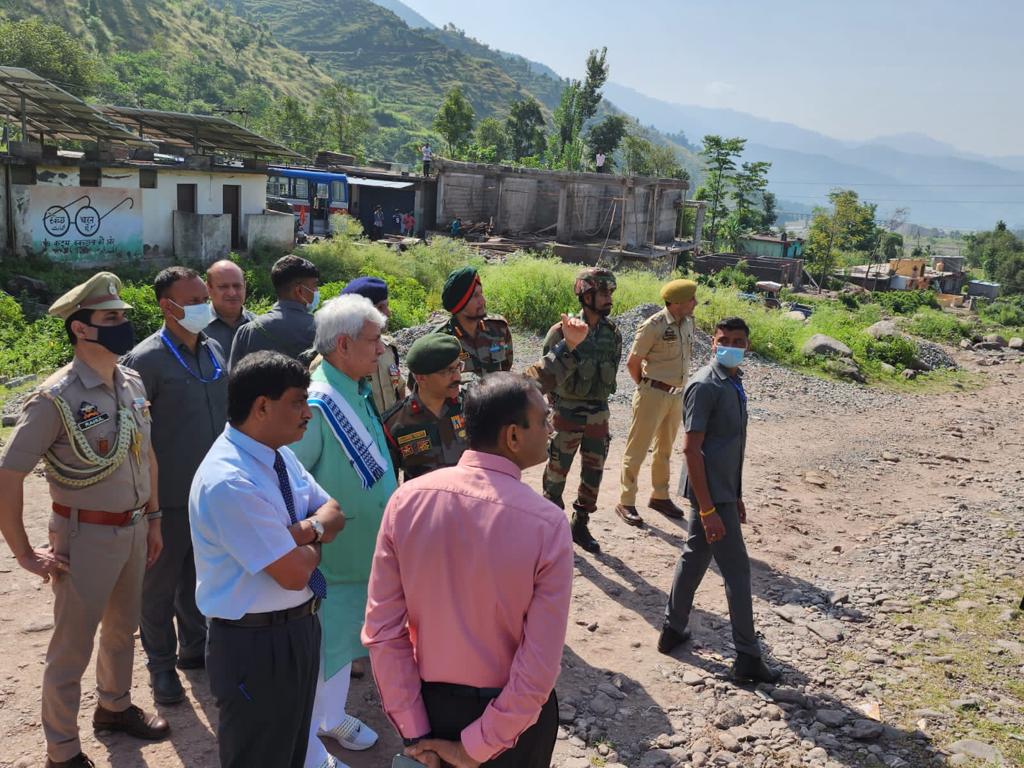 Poonch, September 14: Lieutenant Governor Manoj Sinha visited the forward areas of Poonch today and took stock of the security situation along the border. The Lt Governor, who is on a two-day visit to Poonch, undertook a first-hand assessment of the situation at the Line of Control (LoC) and forward areas at the border village Degwar Terwan in Poonch.
He was accompanied by Chief Secretary Dr. Arun Kumar Mehta; Brigadier Rajesh Bisht; ADGP Jammu, Mukesh Singh; DIG, Dr. Haseeb Mughal; Divisional Commissioner, Ramesh Kumar and other senior officials of civil administration and the army.
The Lt Governor was briefed on the overall security situation prevalent on Line of Control, development works in the border villages by the army, counter infiltration grid and operational preparedness.
While interacting with the officers and personnel of the Armed Forces, the Lt Governor, commended them for the selfless service in challenging situations. He appreciated the excellent synergy between civil administration, J&K Police, army and other security agencies.
“I salute the exemplary bravery of our Armed Forces. J&K UT is witnessing a new dawn of peace, progress and prosperity. Our armed forces, police, CAPFs are handling the challenges with full strength, valour & dedication. India will give a befitting reply to anyone who tries to disturb peace, unity & integrity of the country,” Lt Governor said.
Later, the Lt Governor addressed the border population at Govt. Girls High School Degwar Terwan. The Lt Governor observed that BADP has accentuated the development process of the villages along the border.
The UT Government has rolled out several new schemes for the comprehensive development of the Border Villages, said the Lt Governor.
The Lt Governor took feedback on the benefits being extended under PM Aawas Yojna and other schemes and facilities like LPG, Scholarships etc from the people present in the gathering.
The Lt Government asked the people present on the occasion to ensure enrolment of those who might have been left out under the SEHAT Scheme. They must register themselves to get a Golden Card, which is providing health coverage to every family of the UT.
The Lt Governor further said that various unprecedented initiatives and interventions by the UT administration have led to a corruption-free, fear-free and transparent governance system in Jammu Kashmir.
The Lt Governor said that Prime Minister Narendra Modi has given special focus on the development and prosperity of Border people especially the Youth. The young generation should come forward and avail the benefits of various schemes launched under Mission youth to become self-reliant and successful entrepreneurs.
The Lt Governor asked the people to avail maximum benefits from a transparent and responsible governance system put in place in the UT. He further asked them to give feedback on the various e-services launched to uproot corruption from J&K.
The Lt Governor observed that after the complete implementation of 73rd & 74th constitutional amendment and establishment of three tier system in J&K, the funds received by the panchayats have been increased considerably.
The goal of the UT administration is to bring the development process in terms of Health services, road connectivity, education and other services in Villages especially the Border Villages at par with that of Towns and the cities, said the Lt Governor.
On the occasion, the Lt Governor directed the District Administration to identify land for developing local industries in the District. The Government has kept the provision to provide greater incentives for remote and Border areas under the Industrial Development Scheme.
Earlier, Ch. Abdul Ghani, Member DDC Poonch submitted a memorandum of demands to which the Lt Governor assured for appropriate redressal of all the genuine issues on merit.
Tazeem Akther, DDC Chairperson Poonch; Dr Arun Kumar Mehta, Chief Secretary; Mukesh Singh, ADGP Jammu; Ramesh Kumar, Divisional Commissioner Jammu, besides senior officials of District Administration, Army and concerned departments, PRI representatives and local people were present on the occasion.