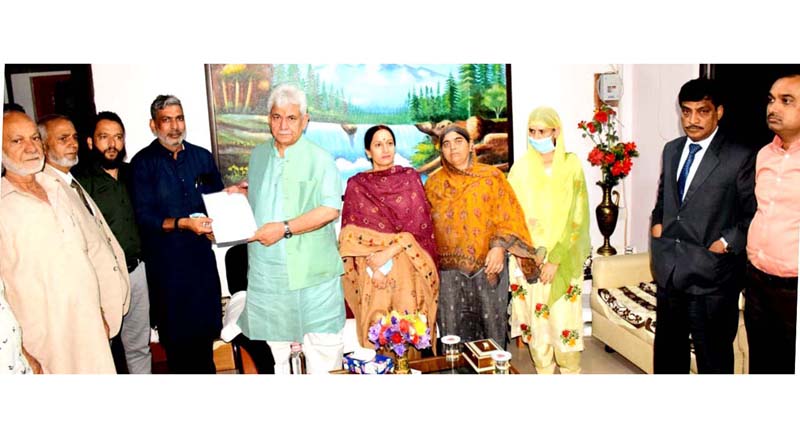 Kishtwar, Sept 14: Lieutenant Governor Manoj Sinha during his visit to Kishtwar, chaired a meeting with the senior officials of Hydroelectric Power Projects (HEP).
The Lt Governor directed the HEP authorities and executing agencies for completion of the projects having national importance within a given deadline.
He stressed upon employment of locals in these projects and directed the authorities to enhance the skill of local youth through Skill Development/Enhancement Programme so they can be absorbed in the ongoing projects.
During the meeting, the authorities also apprised the Lt Governor about various bottlenecks in the smooth functioning of projects.
The Lt Governor directed the District Administration to ensure hassle-free working in ongoing power projects in the district.
The meeting was attended by Dr Arun Kumar Mehta, Chief Secretary; Nitishwar Kumar, Principal Secretary to Lt Governor; Mukesh Singh, ADGP Jammu; Ramesh Kumar, Divisional Commissioner Jammu; Sunil Gupta DIG DKR range; Dr Devansh Yadav, DC Kishtwar; Shafqat Hussain Bhat SSP Kishtwar besides HOPs of HEPs.
Earlier, the Lt Governor interacted with various public delegations of Kishtwar. As many as 15 delegations of Kishtwar District including PRI representatives, socio-religious organisations, political parties, and civil society members apprised the Lt Governor of various aspirational needs and other issues related to the development projects.
The Lt Governor assured the delegations that all their concerns would be looked into meticulously for the early redressal.
During his interaction with the delegation of PRI members, the Lt Governor urged them to act as a bridge between people and administration in the grievance redressal mechanism and ensuring 100% saturation of welfare schemes.
The delegations expressed gratitude to the Lt Governor for visiting the district Kishtwar and inaugurating and launching various developmental works, besides giving a patient hearing to their issues and demands.