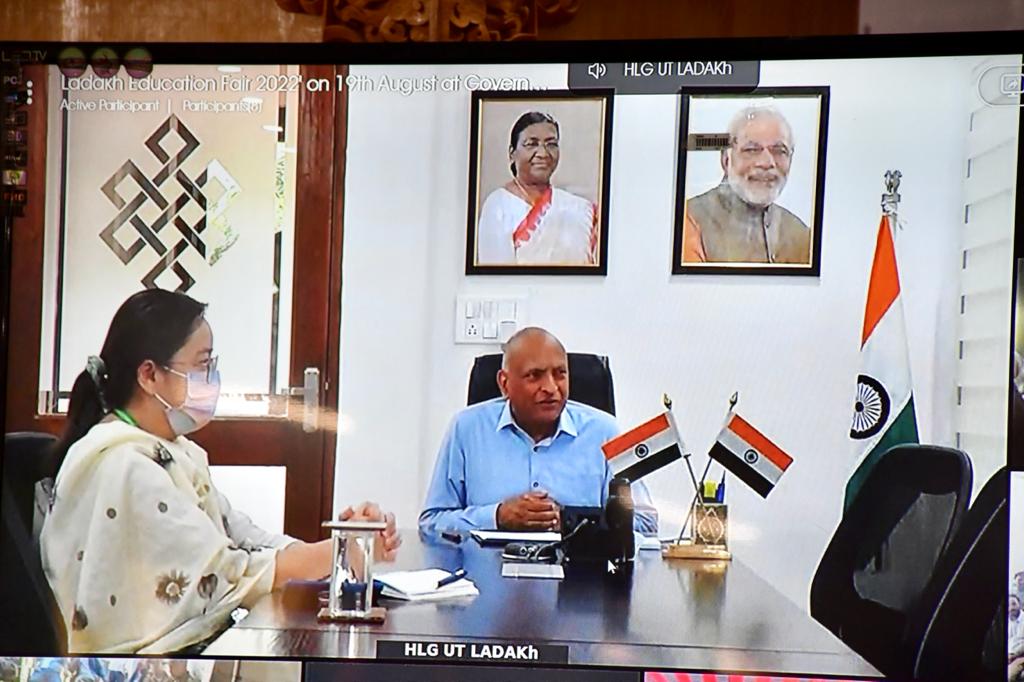 Leh, Aug 19: The Lieutenant Governor of Ladakh, RK Mathur, today virtually launched the first Ladakh Education Fair being organised by the Higher Education Department in collaboration with the University of Ladakh and Ladakh Skill Development Mission (LSDM), at EJM College in Leh. LG Mathur also launched the Ladakh Skill Development Mission portal on the occasion. Chairman, LAHDC Kargil, Feroz Ahmed Khan and former Vice-Chancellor, University of Ladakh (UoL), C Phuntsog were present at the event as guests of honour. Executive Councillor, LAHDC Leh, Stanzin Chosphel and Vice-Chancellor, UoL, Prof SK Mehta, were present at the event.
Calling Ladakhi youth as the future of Ladakh, LG Mathur advised them to make full use of the first Ladakh Education Fair. He appreciated the attitude of the Ladakhi youth for coming back to Ladakh after the completion of their higher education to work for the benefit of society. He stated that this is a positive sign for society and the economy of the region. He informed that efforts are being made to provide jobs and scholarships to the students of Ladakh.
LG Mathur stated that the Ladakhi Education Fair aims at career counselling and provides information on scholarships, skill development, apprenticeship programmes and education loans for students to enable them to avail the benefits. He expressed happiness that a much larger number of students from Ladakh are availing benefits of various scholarship schemes of the central government and UT Administration after the formation of Ladakh as a Union Territory.
LG Mathur called choosing a career or profession as a critical decision for youth. He suggested the primary sector as an area that can contribute to the economy of Ladakh in the future. He stressed the need for convergence between the future of Ladakh and the subjects chosen by the students, especially those that are relevant to Ladakh. He suggested that students may choose professions where Ladakh can offer ready-made opportunities.
LG Mathur expressed hope that the Fair would prove beneficial to students in providing guidance and helping them to decide their careers/professions.
Former Vice-Chancellor, UoL, C Phuntsog, shared his experiences and stressed the importance of analytical learning and on education as an investment in human resources.
Earlier, Commissioner/Secretary, Higher Education, Padma Angmo, welcomed the guests. Principal of EJM College, Sameena Iqbal, gave the vote of thanks.
Students of EJM College, Government Degree College (GDC) Nubra, GDC Kargil, GDC Zanskar, GDC Drass and GDC Sankoo are taking part in the two-day Fair.