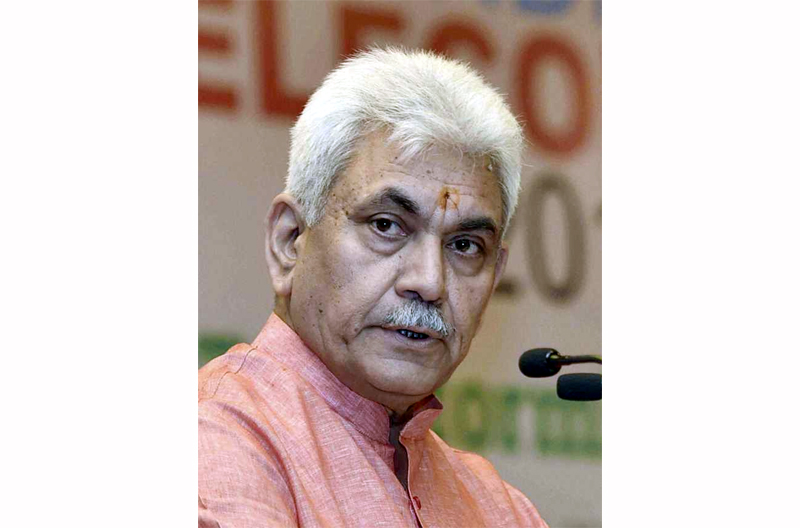 PAGD not a ‘Gang’ for me, met leaders individually

*Militancy will be eliminated, security forces have upper hand

JAMMU, July 3: Lieutenant Governor Manoj Sinha today assured that Assembly elections in Jammu and Kashmir will be held in free, fair and transparent manner and that Election Commission of India will take call on the polls after the Delimitation Commission, which has fast paced the process for delimitation of Assembly constituencies, completes its exercise.
“The Delimitation Commission is conducting its exercise in complete transparent manner. I have also been a member of the Commission in Uttar Pradesh earlier and I know how transparent working of the Commission is. The charges that the delimitation is being held to give dominance to one region over the other are baseless, I reject these charges,” Sinha said in an interview to India Today TV network.
He said when the political parties see the working of Delimitation Commission they will know they do their job in completely transparent manner. The political parties will themselves say working of the Commission is independent. The Commission has been constituted by an Act of the Parliament and none should doubt its working, he added in response to a question that the Commission has been set up to give political dominance to Jammu region.
“It is the Election Commission which has to conduct and announce dates for the Assembly elections. But I assure that the polls will be held in free, fair and transparent manner and free of violence just like last year’s District Development Council (DDC) polls,” Sinha said.
On grant of Statehood to Jammu and Kashmir, he said the top leadership of the country has assured that it will be granted at an “appropriate time”.
It may be mentioned here that in the All-Party Meeting chaired by Prime Minister Narendra Modi on June 24, the Jammu and Kashmir leadership was assured fast-paced delimitations followed by Assembly elections and Statehood.
To a question that leaders of People’s Alliance for Gupkar Declaration (PAGD) were earlier dubbed as “Gupkar Gang” but have now been called for talks by the Central Government, the Lieutenant Governor said the PAGD is not a “Gang” for him.
“I don’t think they are the “Gang”. In fact, I keep on talking to them and have also met majority of political leaders individually except Mehbooba Mufti. However, I received an email from Mehbooba’s daughter and replied to that,” Sinha said.
Asked whether Mehbooba Mufti raked up the issue of holding talks with Pakistan at the All-Party Meeting, he said he won’t reveal what happened in the meeting but added that no objectionable comments were made by anyone.
“There have been diplomatic and backchannel talks with Pakistan which have resulted into fresh ceasefire agreement on the borders,” he noted. At the same time, he cautioned that none would be allowed to challenge sovereignty and integrity of the country and fight against the militancy will continue till the scourge is completely eliminated.
On whether restoration of Article 370 is a closed chapter, the Lieutenant Governor observed: “Everyone understands that the matter is sub-judice. Speaking for or against the Article isn’t good and amounts to an offence”.
On recent killings of political leaders and other individuals, Sinha admitted that some incidents did take place “but if we do comparative analysis of previous years, the situation is much better with the infiltration of militants down, fresh recruitment to militant ranks has virtually come to an end and some protected persons got killed due to their negligence also. A system is now being developed to keep protected persons safe”.
“Security forces are in full command of the situation. They have an upper hand over the militants. They are working in great coordination. Security forces are also ready to counter drone threats effectively. The Defence and Research Development Organization (DRDO) is also working on technology to prevent drone attacks,” Sinha said.
He added that 73rd and 74th Amendments of the Constitution of India have been fully implemented in Jammu and Kashmir and, for the first time, three-tier System of Panchayati Raj has been established.
“Funds and Functions have also been transferred to the elected rural bodies,” he said.
“This was very rare instance in the country and first timer in Jammu and Kashmir that District Capex Budget was prepared after holding talks with Panchayats, Block Development Councils and District Development Councils and passed then. The budget is double this year as compared to previous year,” Sinha asserted.
The Lieutenant Governor also referred to large-scale development works and projects going on in Jammu and Kashmir and effective COVID management during second wave.