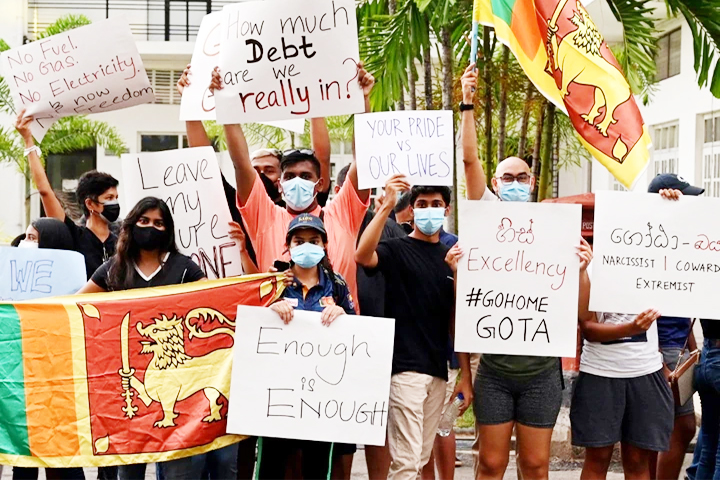 Arun Kumar Shrivastav
On Tuesday, Governor of the Central Bank of Sri Lanka Ajith Nivard Cabraal announced that the country would default on international debt payments until it receives a $3 billion bailout package it has asked for from the IMF. Sri Lanka’s external borrowings amount to $51 billion and roughly half of them are market borrowings through international sovereign bonds, one of which is worth $1 billion maturing on July 25. There are some other urgent debt repayments due in the next few months. In all, Sri Lanka needs $7 billion to service its debts this year while it had $1.9 billion of forex reserves at the end of March.
By now, the story of how Sri Lanka got into the current financial mess is known to everyone. It began in 2005 when Mahinda Rajapaksa became President and remain in power until 2015. By the time he left office in 2015, the country had built several cost-intensive but futile projects with Chinese debts. In 2017, it offered a majority stake in deep-sea Hambantota port to a Chinese company. Another much talked about project is Mattala Rajapaksa International Airport which is often referred to as the world’s emptiest international airport. The Lotus Tower, The Magam Ruhunupura International Convention Centre, the Mahinda Rajapaksa International Cricket Stadium, and a network of highways, particularly, in the Southern Province are cited as examples of wasteful expenditure.
The mounting debt and its repayment got exacerbated during the 2-year-long Covid-induced lockdown for its tourism-dependent economy. When meeting the import bills became difficult, President Gotabaya Rajapaksa put a blanket ban on the import of chemical fertilizers in March 2021 and asked the farmers to go fully organic. Originally, the country was implementing a 10-year-long slow transition to organic farming beginning 2020. The sudden disruption in agriculture proved costly and it not only impacted the paddy crop but also the tea that is an important export from this island nation of 22 million people in the Indian Ocean. By December the country began facing an acute shortage of food items and because of the lack of forex reserves its energy imports also got impacted, leading to power cuts and disruption of industrial activities.
What happened from December onwards has been widely reported by the media. Now, people are on the street and asking for the Rajapaksas to resign. Besides reckless debts for useless projects, Mahinda Rajapaksa is blamed for following a “super-casual approach” to the economy. For example, his government has been anti-privatization and anti-FDI. It believed in building large public enterprises. To remain popular with the people, Mahinda Rajapaksa didn’t care for fiscal prudence. The interest rates were kept low and the public sector employment almost doubled to 1.5 million, eating up an enormous 70% of the state’s revenue.
After coming to power in 2019, the Rajapaksa had the option to go to the IMF and seek a bailout but they didn’t. They trusted their own wisdom and didn’t pay heed to economists and professionals. Now, the situation is completely out of control. The country is facing a 13-hour power cut daily amid a serious scarcity of food grains and other essentials. The Rajapaksas are completely helpless. Rather, they are at the centre of intense public ire. People are blaming him not only for incompetence but also for questionable integrity. They want the Rajapaksas to be held accountable for the current situation and tried for the money they have “stolen”.
The super casual approach to the economy that made the government pursue an anti-privatization, anti-FDI, and anti-IMF approach is responsible for the current Sri Lankan economic crisis.
An IMF bailout package seems to be the road ahead. For the Rajapaksas, it’ll be immensely difficult to stay in power for long, if at all.
Besides Sri Lanka, Pakistan, Bangladesh, and Nepal in India’s neighbourhoods are facing serious economic problems. Recently, Bangladesh Prime Minister Sheikh Hasina attracted the attention of people even outside her country for asking people to cook “Beguni” with pumpkin. Beguni is a Bengali cuisine of brinjal or eggplant fritters. Her suggestion came in response to people in Bangladesh complaining about the high prices of brinjals during the ongoing Ramadan season.
Before losing power, Pakistan Prime Minister Imran Khan was also hassled by the rising prices of potatoes and tomatoes. He tried to wriggle out of the situation by claiming that he had not become prime minister to fix the prices of “aloo-tomatar”.
In India, the price of onions often becomes a headache for the Government.
But instead of ignoring them, the prices of basic items need to be taken seriously as they indicate the wellness of the economy. The collapse of the Sri Lankan economy has been prompted by the failure of the crops because of unavailability of the fertilizers. (IPA)