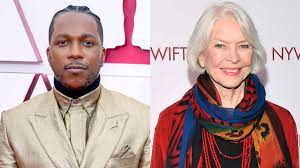 Los Angeles, July 27: “One Night in Miami…” star Leslie Odom Jr will star in the upcoming reboot of “The Exorcist” alongside veteran star of the horror classic feature film, Ellen Burstyn.
Burstyn, who played Chris MacNeil in the 1973 original directed by William Friedkin, will reprise her role in the new film.
According to The Hollywood Reporter, the reboot hails from Blumhouse and Morgan Creek Productions, in partnership with Universal and Peacock.
David Gordon Green, known for the 2018 slasher film “Halloween”, will direct the first of three planned movies.
According to The Hollywood Reporter, “The Exorcist” sequel is being written by Peter Sattler and Green. Jason Blum, David Robinson, James Robinson, Green, Danny McBride and Couper Samuelson are attached as executive producers.
Universal and its streaming service Peacock acquired the worldwide rights to create new IP based on “The Exorcist” franchise in partnership with Blumhouse and Morgan Creek.
The first film in the trilogy will open in theatres on October 13, 2023. Universal will play “The Exorcist” revival in cinema halls and digitally on Peacock.
“There’s no better time to be joining forces with the team at Peacock, reuniting with the great team at Universal and finally getting to work with my friends at Blumhouse, than on this classic franchise,” David Robinson, Morgan Creek president, said in a statement.
Universal and Blumhouse previously collaborated on popular horror titles “Get Out”, “Split” and “The Invisible Man”.
Friedkin’s original film “The Exorcist” was a massive box office success which earned over USD 441 million in total, making it the highest domestic grossing horror film over a 48-year-long run.
Adapted from William Peter Blatty’s 1971 novel, the film revolved around a 12-year-old girl Reagan, played by Linda Blair, possessed by a demonic entity and her mother Chris’ (Burstyn) attempt to rescue her through an exorcism conducted by two Catholic priests.
It also starred Max von Sydow, Lee J Cobb, Kitty Winn, Jason Miller and Jack MacGowran in his final film role.
“The Exorcist” was nominated for 10 Oscars, including best picture and director, and won in the best sound and the adapted screenplay category for Blatty.
The film has led to multiple sequels and a media franchise including a television series. (PTI)