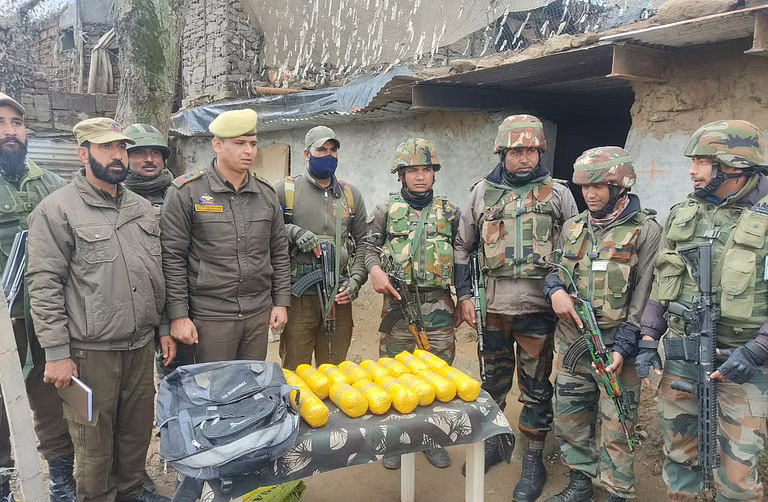 JAMMU, Feb 26: Thwarting a major drugs smuggling attempt from across the border, security forces Saturday recovered 15 kg narcotics, possibly heroin, from a village along the Line of Control (LoC) in Jammu and Kashmir’s Poonch district, officials said.
The seized narcotics is believed to be worth Rs 75 crore in the international market, the officials said. Poonch Senior Superintendent of Police Rohit Baskotra said a bag, containing 15 packets of narcotics-like substance weighing almost 15 kgs, was recovered during a joint search operation by the army and police in Balakote sector of Mendhar.
An FIR under various sections of the Narcotic Drugs and Psychotropic Substances (NDPS) Act was registered at the Mendhar police station and further investigation started, the officer said, terming the seizure as a “big achievement” for security forces. Baskotra, who rushed to Mendhar on hearing about the seizure, said several attempts were made in the recent past from across the LoC for infiltration and sending arms and ammunition besides drug consignments into Jammu and Kashmir.
He said the alert troops foiled all the attempts. The latest recovery displays a strong synergy among security forces to meet the challenges posed by the enemy, he added. The search operation was still going on in the area, the officer said, asserting that the security forces are fully alert and will not allow any attempt to push infiltrators, arms and drugs.
The SSP appealed to the people to come forward and share information about those involved in drug peddling, assuring that their identity will be kept secret.
He also asked the parents of the drug-addicted youth to contact police to get their children treated at drug de-addiction centres being run by police. ”Anyone found involved in drug-peddling will not be spared. He will be booked and jailed,” Baskotra warned. Meanwhile, the police arrested an alleged drug-peddler and recovered 8.9 kgs of Charas from his possession at Parna village of Chatroo in Kishtwar district on Saturday.
The accused was identified as Abdul Latief, a local resident, and was booked under the NDPS Act, a police spokesperson said. He said Latief was found moving in a suspicious manner and a search of his luggage led to the recovery of the cannabis. (Agencies)