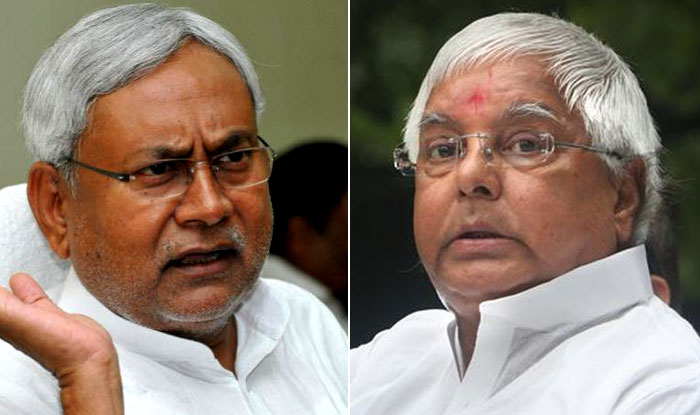 NEW DELHI, Sept 25: Bihar Chief Minister Nitish Kumar and RJD supremo Lalu Prasad Yadav met Congress president Sonia Gandhi here today and pitched for bringing all opposition parties together to defeat the BJP in 2024.
The meeting at Gandhi’s 10 Janpath residence is being considered very crucial in forging an opposition unity as efforts are on to reconcile differences between the Congress and some regional parties that have been at loggerheads traditionally.
This was Kumar’s first meeting with Gandhi since he severed ties with the BJP and joined hands with the RJD and the Congress to form the government in Bihar in August.
This was also Lalu Prasad’s first active political engagement in a long time. He has been ailing for some time now.
After the meeting, Lalu Prasad told reporters, “We have to bring all opposition parties together to defeat the BJP. The Congress is in the process of electing its new president and Sonia Gandhi told us we will meet again after the election.”
Kumar said there is a need for all opposition parties to join hands and work together to take the country forward.
“All opposition parties on the same page in the fight against the BJP and discussion on a concrete plan of action will happen later after the election for the post of Congress president,” he told reporters after the meeting.
The nomination process for the election to the Congress president’s post is underway and the polling, if needed, is scheduled for October 17.
Earlier in the day, Kumar called for uniting all opposition parties, including the Congress and the Left, to take on the BJP and said this “main front of opposition” will ensure that the saffron party loses badly in the 2024 Lok Sabha elections.
If all non-BJP parties unite, then they can get rid of those who are working to destroy the country, Kumar said at a rally organised by the Indian National Lok Dal (INLD) in Haryana to mark former Deputy Prime Minister Devi Lal’s birth anniversary.
INLD leader Om Prakash Chautala, Shiromani Akali Dal’s Sukhbir Singh Badal, both with a long history of fighting the Congress, were on the stage with other senior leaders such as NCP’s Sharad Pawar, CPM’s Sitaram Yechury and Arvind Sawant of the Shiv Sena.
Bihar Deputy Chief Minister and RJD leader Tejashwi Yadav was also on the stage in what was seen as a step towards unity among non-BJP parties.
However, no one from the Congress attended the rally.
The leaders attacked the BJP, accusing it of trying to create “Hindu-Muslim disturbances” to benefit politically and making false claims and promises.
Hitting back, BJP president J P Nadda, who was in Kerala, said the only thing common to these opposition parties is “dynastic politics and corruption”.
At the rally, Nitish Kumar, whose JD(U) snapped ties with the BJP last month, said there is “no question of a Third Front” and there should be one “main front” to trounce the BJP in the 2024 elections.
Even INLD president OP Chautala said that “they will talk to all parties including Congress to form a united front of opposition parties.”
Though not in as many words, Badal underlined the need for opposition parties to come together.
He asserted that the “real NDA is here on this stage not somewhere else. The founding members SAD, Shiv Sena, and JD(U) are present here. We removed the BJP from the NDA.”
Pawar spoke at length on the plight of farmers who protested against the three farm laws and said the government has still not fulfilled their demand for minimum support price (MSP).
He also talked about the Government not taking back cases filed against the protesting farmers.
“The real solution to problems of farmers and unemployment can only be by bringing a change and everyone must strive for a change of the government at the Centre in 2024. All opposition parties should come together,” he said.
Speaking on similar lines, Yechury said it is time to change the manager who is ”mismanaging the country and creating chaos”.
“We all should come on one platform including the Congress,” the CPM leader said.
Though no one from the Congress attended the rally, Nitish Kumar and RJD chief Lalu Prasad Yadav met Congress chief Sonia Gandhi at her residence in the national capital after the public meeting.
However, regional bigwigs like West Bengal Chief Minister Mamata Banerjee and Telangana Chief Minister K Chandrashekar Rao, who have shown an inclination towards forming a non-Congress alliance to take on the BJP in the past, stayed away from the rally, besides Samajwadi Party chief Akhilesh Yadav.
With one leader after another pitching for a larger unity among opposition parties, JD(U) leader K C Tyagi said in his speech that the rally marked the beginning of the coming together of non-BJP parties in the run-up to the Lok Sabha polls in 2024.
At a meeting in Kerala, BJP chief Nadda said that opposition parties are holding meetings these days to take on the BJP.
“Two things are common to them. First, all of them are family parties and secondly, they are neck-deep in corruption. Some are accused in corruption cases and some others are out on bail,” he said.
Nadda said the BJP has to take on the challenge from the “corrupt and dynastic parties” to save democracy.(PTI)