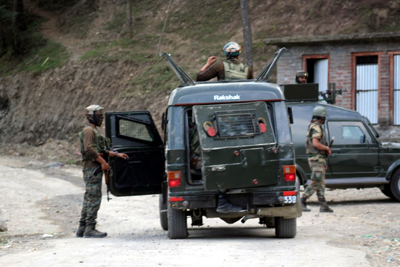 Excelsior Correspondent
SRINAGAR, Sept 5: A non-local labourer was killed in a shootout between militants and security forces in Hajidarpora village of South Kashmir’s Pulwama district this morning while three militants of Lashkar-e-Toiba (LeT) were trapped by security forces in Sheeri forest area of Baramulla district.
Militants attacked the Army’s 55 RR patrolling party when they were conducting census in Hajidarpora village in Lassipora area of the district.
The fire was retaliated by the Army, resulted into a brief exchange of fire. The labourer was injured in the encounter.
The labourer, identified as Suresh Kumar, 17, of Uttar Pradesh succumbed to injuries at SKIMS Soura this afternoon. Kumar, a resident of Bareily, Pilibhit in Uttar Pradesh was working as a labourer at a brick kiln in the district.
Security forces cordoned off the area immediately and conducted searches against the militants who carried out the attack. However, no one was arrested.
Security forces today trapped three militants in Malpora Sheeri forest area in Baramulla district of North Kashmir.
A joint operation was launched by 46 RR and 52 RR of Army, 53 Battalion of CRPF and Baramulla Police in the forests of Sheeri in Baramulla district after inputs about presence of three militants of LeT in the area.
The troops spotted the militants today and challenged them leading to an encounter in which one militant was injured but they managed to slip out. They were again spotted this evening and challenged, leading to a brief encounter.
They, however, again slipped out of the cordon but the security forces have tightened the cordon and are conducting the searches. They recovered 3 pouches during the searches.
It may be mentioned here that a joint team of Baramulla Police, 53 Batallion CRPF, and 46 RR of Army yesterday cordoned off the Upper reaches of Sheeri after they received inputs that three militants of LeT including two foreigners are hiding in the village.
Another joint operation was launched by Baramulla Police and 52 RR of Army in Kandi Baramulla yesterday. The operation was launched to prevent the militants group from fleeing to that area.