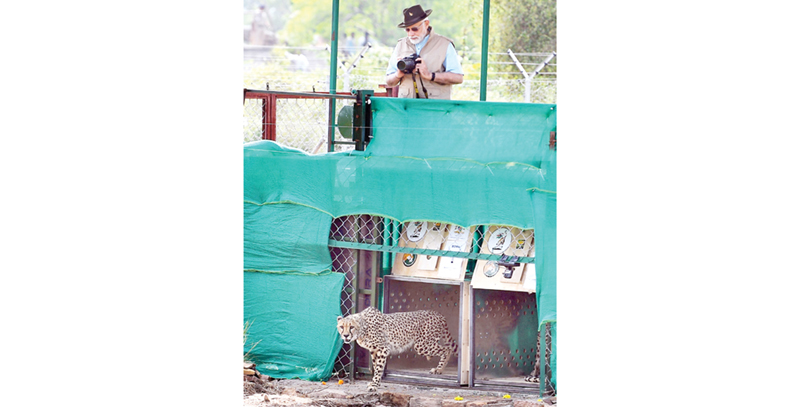 BHOPAL, Sept 18: Madhya Pradesh’s Kuno National Park, the new home of African cheetahs in India, has enough space and an adequate prey base to house 20 to 25 such big cats, an official has said, as the little-known wildlife sanctuary basked in its new-found global fame.
On September 17, eight cheetahs airlifted from Namibia — five females and three males – were released in the Kuno National Park (KNP) with much fanfare, putting the sanctuary in Sheopur district firmly on the world map.
Prime Minister Narendra Modi himself released three of these felines into a special enclosure in the park by operating a lever of the cages in which they were transported from the African country.
The cheetahs, the fastest land animal, have been brought to the park as part of an intercontinental translocation project to reintroduce the feline in India seven decades after it was declared extinct in the country.
Madhya Pradesh Principal Chief Conservator of Forest (Wildlife) JS Chauhan, closely associated with the cheetah reintroduction programme, expressed confidence that the translocation plan would be a great success.
He said Madhya Pradesh has perfected the art of wildlife conservation and revival of animal species, citing the example of the Panna Tiger Reserve.
He said in 2009, the reserve was completely devoid of the big striped cats, but later it successfully implemented a tiger reintroduction programme and revived their population.
The eight African cheetahs will be in giant quarantine enclosures in KNP for almost a month and later they will be housed in acclimatization zones for 2 to 4 months before being released in the wild.
After getting the first lot of cheetahs from Namibia, India was looking forward to importing 12 more spotted mammals from South Africa after signing an MoU with that country, officials said.
“KNP is spread over an area of 750 sq km and has sufficient space to accommodate 20 to 25 cheetahs,” Chauhan told PTI in an exclusive interview.
Asked that some experts were of the opinion that a cheetah needs at least 100 sq km to thrive, the senior official said this viewpoint was not true.
Besides, the thicket around KNP stretches to 6,000 sq km of forest area from the adjoining Shivpuri and Sheopur district of MP till Baran district of Rajasthan, he contended.
Chauhan, who is also MP’s Chief Wildlife Warden, ruled out the possibility of the cheetahs crossing over to the Ranthambore Tiger Reserve (RTS) in Rajasthan, located around 80km from KNP, saying the Chambal river runs between the two states and that acts as a barrier. “That is why the tigers from RTS are not crossing over to KNP,” he contended. (PTI)
The Principal Chief Conservator of Forest (PCCF), however, did express apprehension that the cheetahs may stray of the area earmarked for them, but added there was no chance of them falling prey to man-animal conflict.
Asked about the chances of the cheetah intercontinental project succeeding, Chauhan said he was confident everything will go as per plan.
“We are hopeful because we have a wonderful track record with us. Not only in Panna. We have introduced tigers in the Sanjay Tiger Reserve, the Nauradehi Wildlife Sanctuary and now we are going to put them in the Madhav National Park also,” the senior forest officer said.
MP has successfully implemented different translocation projects related to tiger, gaur or barasingha.
“As far as the cheetah is concerned we have not done its management so far as our generation is not acquainted with the animal and its conservation.
“But nowadays science is so evolved that we have a fair understanding about the species, its ecological, habitat and other requirements, he said.
KNP has a reasonably good prey base for cheetahs, Chauhan added.
Asked to explain how a cheetah is different from a tiger or a leopard Chauhan said the spotted animal is a true hunter and chases its prey.
On the other hand, other carnivorous like tiger and leopard ambush their prey.
“Cheetah is the fastest land animal and can run for a while. Its prey cannot run as fast as the spotted animal. In the case of tiger and leopard, they cannot sprint for more than 100 metres-200 metres,” he added.
Queried about the staple prey of cheetah, the PCCF stated that the spotted animal loves to feed on different species of antelopes.
“We have antelopes (in KNP), but their density is not as much as we would like to have, but their substitute is spotted deer in our conditions. We have a good population of spotted deer, blue bull, chinkara, wild boar,” he said.
Chauhan said chitals were being herded inside the acclimatization enclosures of cheetahs.
KNP is situated on the northern side of Vidhyachal mountains and draws its name from a tributary of the Chambal river, Kuno.
“Extensive hunting, domestication and shrinking habitat led to the extinction of cheetahs in India. The last three cheetahs were killed in forests that are now part of Ghasidas National Park (Chhattisgarh)” said Ajay Dubey, a wildlife expert and founder-secretary of ‘Prayatna’, a Bhopal-based voluntary organization.
The last cheetah died in the country in 1947 in Korea district in present-day Chhattisgarh and the animal was officially declared extinct in 1952.
The ‘African Cheetah Introduction Project in India’ was first conceived in 2009. (PTI)