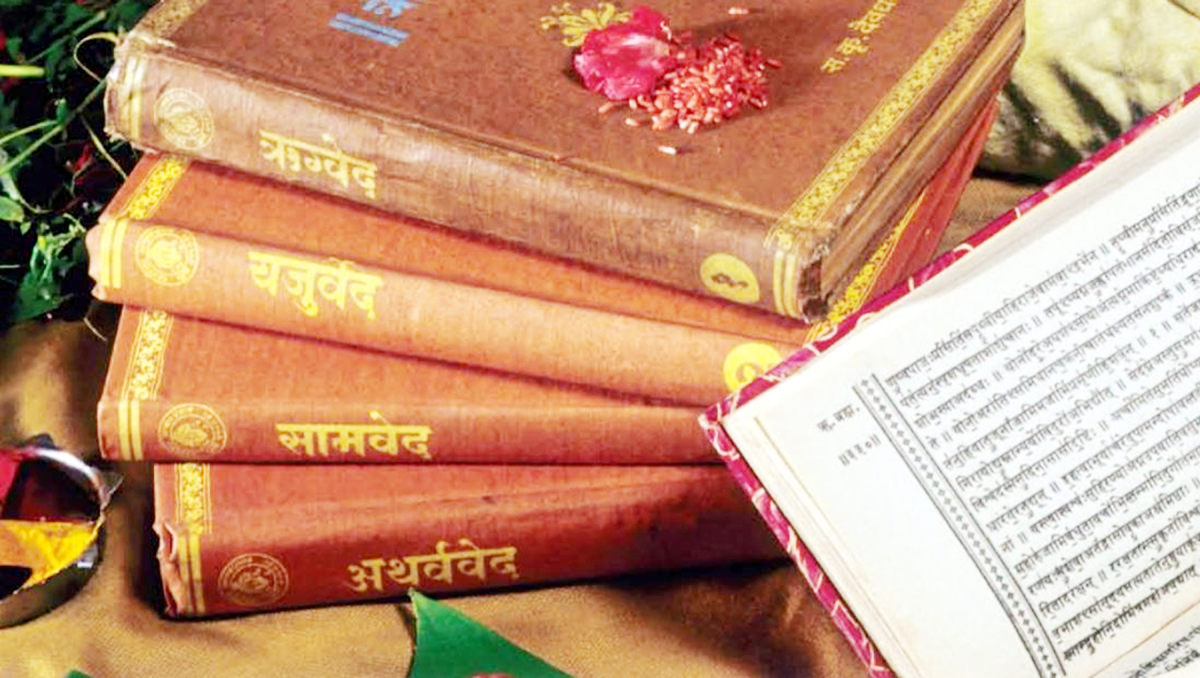 As per Vedas, the basic method to define auspicious deeds and sins is that the duties discharged faithfully according to Vedas are called auspicious deeds and those against the Vedas are sins. So, in this matter, vedic knowledge is essential. Further, the knowledge of vedas exists in Divine Sanskrit language and the sadgranths written by our ancient Rishi-Munis have also been written in Sanskrit language.
Naturally, Sanskrit language is required to attain the vedic knowledge. Otherwise we would indulged in illusion committing sins, thinking that we are doing pious deeds.
The learned state about Sanskrit language that just as the utensil is purified by scrubbing and cleaning so is the Sanskrit language which is the purest language. Sanskrit is also called Matri Bhasha, Dev Bhasha, Dev Vanni (language of learneds). Especially the Divine Vedic Sanskrit language is called THE VOICE OF GOD in which the four vedas exists. Sanskrit language and vedic culture are the most invaluable and unparalleled treasure of India and we the Indians must be aware that the most valuable ancient storehouse of the knowledge is secured in this language only.
For example- Vedas, Upnishads, six Shastras, Valmiki Ramayan, Mahabharat epic and Bhagwad Geeta granth etc., exist in Sanskrit language only and not in any other language.
So, we will have to consider deeply that the eternal and everlasting knowledge which exists in said holy granths would always remain untouched if Indian generation does not take interest to study invaluable, praiseworthy Sanskrit language and if the said ancient granths would remain untouched then undoubtedly the people would remain ignorant and fail to make difference between auspicious deeds and sins (which is being observed in present scenario).
Secondly, what purpose can the unseen water hidden inside earth serve? A thirsty person can only quench his thirst from the visible water present over the earth.
I mean to say when God given knowledge in the shape of four Vedas and the knowledge purely based on Vedas, written by our ancient Rishi-Munis and being given by present Rishis in the form of above quoted sadgranths is available then to go hither and thither in search of God and His worship would be against the Vedas, which may go in vain.
In other words, the entire knowledge exists in Vedas and Granths written by our ancient Rishis based on Vedas. But for one or the other reason, we are searching the said knowledge hither and thither, the result of which cannot be fruitful.
Then how the thirst of an aspirant to realize God be quenched?
You see, for certain reasons, the sun of knowledge of Vedas has almost set down. So, now, mostly the people are not concentrating their minds to study Sanskrit language and ved mantras which are full of ambrosia. In this connection, let us pay our attention towards the preach of Almighty God in Rigved mantra 10/71/4 that – Someone in the public while seeing the ved vanni, in the shape of divine words yet does not see them [being ignorant], other one while hearing the Ved vanni yet does not hear (being ignorant of divine words and their meanings) .But for another one who is learned, the ved vanni opens her heart and soul to originate her secrets of mantras within the heart of the learned like a wife in married life, duly adorned with best clothes and ornaments, surrenders/opens herself before her husband desiring to increase the family.
Bhagwad Geeta is the most popular religious granth in India, wherein similar knowledge has been given by Yogeshwar Sri Krishna Maharaj in Shlok 2/29 that someone speaks about the shloka and another listens to it but even while speaking and listening to Bhagwad Geeta, people do not know about the soul. Then question arises that what is the use of such preaching and listening to Bhagwad Geeta if its preach is not held in daily life. Hardly a learned who maintains Brahmacharya, does hard practice of Ashtang Yog philosophy and listens to Vedas, Shastras etc. from Rishis and thus afterwards he sees/realizes soul with a wonder i.e. after seeing/realizing soul, he feels wonder and supreme divine pleasure.
We must also pay our attention towards this fact that whatever we listen, see, i.e. attain knowledge from the five senses, we start believing on the same which is a natural phenomenon. So, if we listen to various subject matters from the ordinary human-beings, from their written scriptures naturally we start learning and believing those matters including spiritualism. But because we donot listen to Vedas- Shastras etc., so, we would be ignorant from the said eternal, true, everlasting preach from the God in the shape of Vedas. And if we start listening to Vedas, Shastras etc. from learned, then we would learn and talk about the said eternal knowledge.
So, here is a point to discuss that which way must we choose to follow- man-made or God-made.
So, there is an appeal to Government to adopt carrot and stick policy for creating facilities and to mould the public to acquire knowledge of Sanskrit language for studying Vedas and our rich ancient literature.