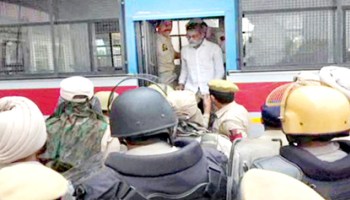 PATHANKOT: The Jammu and Kashmir Police will produce witnesses including Senior Superintendent of Police (crime branch) Ramesh Jalla in the brutal rape and murder of an eight-year-old girl at Kathua in January this year before the district and sessions judge here tomorrow, officials said.
The court, which is hearing the case on directions of the Supreme Court, had issued summons to some of the prosecution witnesses who failed to appear on Friday as it was served late.
Jalla, who headed the investigation, along with three other witnesses will be appearing before the court tomorrow after the district and sessions judge had expressed his displeasure over absence of witnesses on Friday and had issued directions to him for his personal appearance on Monday.
The parents of the victim, who belongs to nomadic minority community which shift their base during the summer months to higher reaches of the Valley, were likely to be produced before the court on Tuesday as locating them and serving them summons took some time, the officials said.
The court had on Thursday framed charges of rape and murder against seven of the eight accused, paving way for beginning of trial against them.
The accused against whom charges were framed were Sanji Ram, his son Vishal, special police officers Deepak Khajuria alias Deepu and Surinder Verma, Parvesh Kumar alias Mannu, head constable Tilak Raj, and sub-inspector Arvind Datta, officials had said.
Sanji Ram is considered to be the main accused who is alleged to have hatched the conspiracy with other accused for kidnapping the girl as a carefully planned strategy to remove the minority nomadic community from the area, the crime branch charge sheet has alleged.
The fate of the eighth accused, who claims to be a juvenile and is a nephew of Sanji Ram, was yet to be decided after the crime branch of the Jammu and Kashmir Police contested his claim that he was a minor.
The district and sessions court has framed charges under various sections of the Ranbir Penal Code including 120-B (criminal conspiracy), 302 (murder) and 376-D (gang rape), special public prosecutor had J K Chopra said earlier.
The court had also framed charges for destruction of evidence and under section 328 (causing hurt by poisoning with an intent to hurt) of the RPC. The two policemen — Tilak Raj and Arvind Datta — were also charged under Section 161 (public servant taking illegal gratification) of the RPC, Chopra had said.
The crime branch had filed a charge sheet on April 9 in Kathua in the case of kidnap, rape and murder of the eight-year-old girl from January 10 this year. She was killed on January 14 and her body was recovered on January 17 triggering a massive political unrest in the state.
According to the charge sheet, the victim was held in captivity at a small village temple in Kathua district where she was kept sedated and sexually assaulted before she was bludgeoned to death.
The eight-year-old had gone missing on January 10 while grazing horses in the forest. Investigators said the accused juvenile had abducted the girl on the pretext of helping her find her horses.
According to the charge sheet, the accused gave the girl sedatives to make her unconscious while holding her in captivity at the ‘Devisthan’, a local village temple.
The juvenile, a school dropout, turned out to be the main player in the abduction and murder, raping the child repeatedly along with Vishal and Deepak Khajuria.
On January 23, about a week after the body was discovered, the government handed over the case to the crime branch, which formed a Special Investigation Team.
“… In the course of investigation, it transpired that somewhere in the first week of January, accused Sanji Ram decided to put a plan to dislodge the Bakherwal community from the area which had been brewing in his mind for quite sometime, into operation and in pursuance to that he made accused Deepak Khajuria, a special police officer, and his nephew (juvenile) as part of the conspiracy and assigned them tasks separately and individually,” the charge sheet said.
Sanji Ram surrendered on March 20 after his son was arrested from Uttar Pradesh a day earlier.
The trial in the case began on May 31 with the seven accused being produced before the district and sessions judge after the Supreme Court transferred the case from Jammu and Kashmir to Pathankot in Punjab for a fair trial following a plea by the victim’s family.
While transferring the case from Kathua to Pathankot, about 30 km away, the apex court directed day-to-day in-camera trial in the case. (AGENCIES)