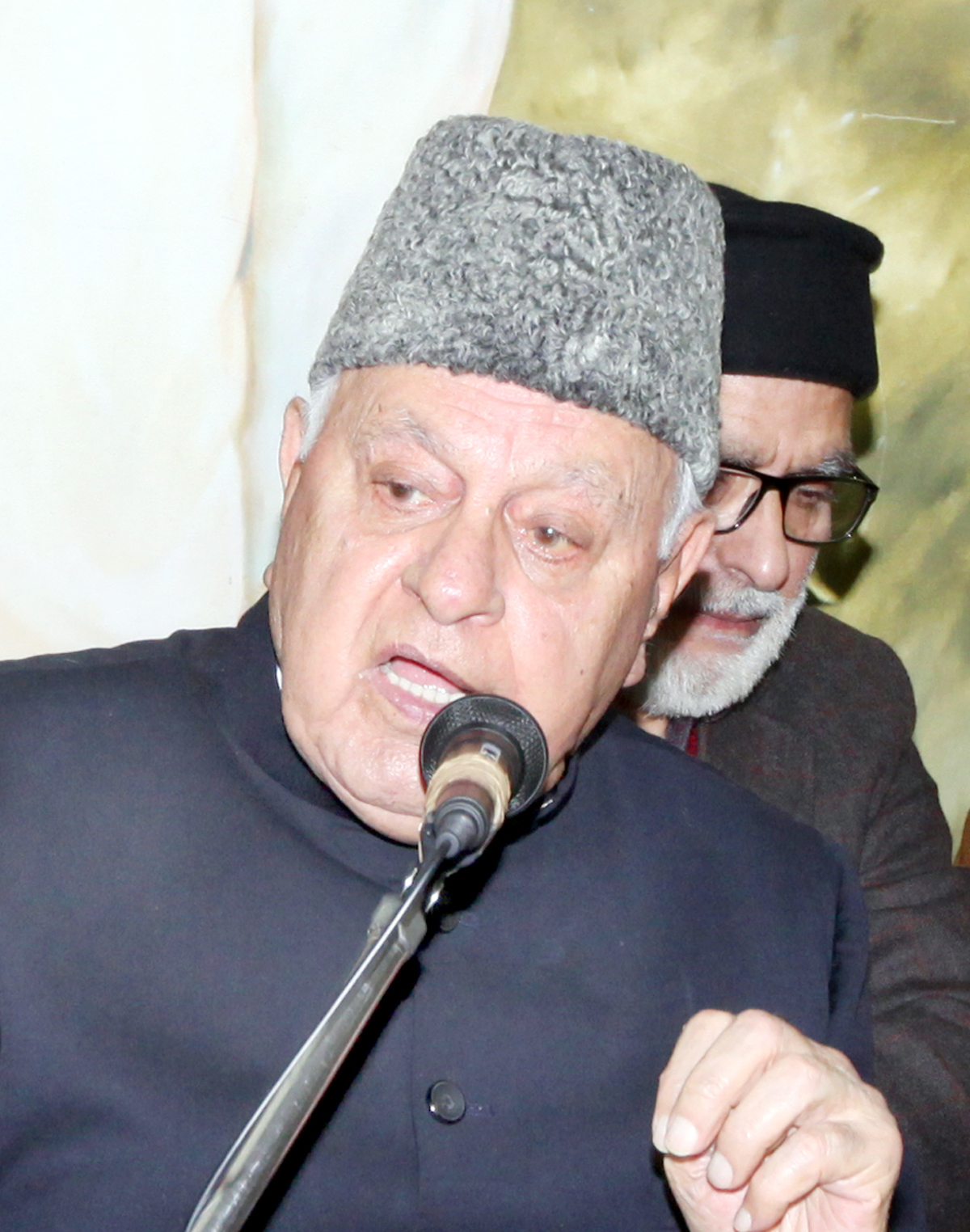 JAMMU, Jan 17: Reiterating that talks were must for peace, National Conference president Dr Farooq Abdullah today said that Kashmir would never go to Pakistan and the neighboring country couldn’t dare to get it forcibly.
“Some crazy people used to talk about Azadi and a few others want to go Pakistan, but which Pakistan? I always say that Jammu Kashmir will never go to Pakistan and Pakistan cannot dare to get it,” he said while addressing party workers at Sher-e-Kashmir Bhawan, NC Headquarters, here at Jammu. Click here to watch video
Suggesting Pakistan to offer the hands of friendship to India for avoiding to get ruined, Farooq Abdullah recalled the famous statement of former Prime Minister Atal Bihari Vajpayee that friends can be changed but not the neighbors. “Friendship between the two neighbours will help both whereas animosity will only damage them,” he added.
However, at the same time, the NC president alleged that Pakistan was abetting terrorism, which must be stopped for holding peace talks with India. “Our neighbor is encouraging terrorism and resorting to skirmishes on border but this will not help finding solution. Only talks are alternative, which will be held after Pakistan stops abetting terrorism,” he said.
Accusing BJP of misleading people by making false promises during polls, Farooq Abdullah said, “They had promised to take Kashmiri Pandits back to Valley. I would like to ask Prime Minister to tell us during his visit here next month, when are you taking them back?”
He also alleged that announcing 10 percent reservation for economically weak general category by the Modi Government was a political gimmick. “Ten percent reservation to whom? In what? Where? They have not cleared it. It will take them five more years to clarify it,” Farooq Abdullah jeered.
The NC president cautioned against elements inimical to the single entity of Jammu and Kashmir and said all their machinations to create mistrust and hatred has to be foiled unitedly. He assailed those day-dreaming about trifurcation of the State and said a united Jammu and Kashmir is crown of the country which has to flourish as a single entity with dignity and honour. He advised reactionary forces to refrain from exploiting public sentiments, especially during elections, adding that the growing trend of dividing the people should be eschewed at all costs.
The NC president sought a massive mandate for the party in the ensuing elections and said that a strong and stable Government alone can steer Jammu and Kashmir to peace, progress and development. He announced that on being given absolute majority, NC will accord 33 per cent reservations in Assembly for women.
On the occasion, NC general secretary Haji Ali Mohammed Sagar, Additional general secretary Dr Sheikh Mustafa Kamal, Rattan Lal Gupta, T S Wazir, Sheikh Bashir Ahmed Th. Kashmir Singh, Brij Mohan Sharma, Ajaz Jan, Bimla Luthra, Deepender Kour and others were also present.
A number of political activists from BJP and Congress joined National Conference on the occasion.