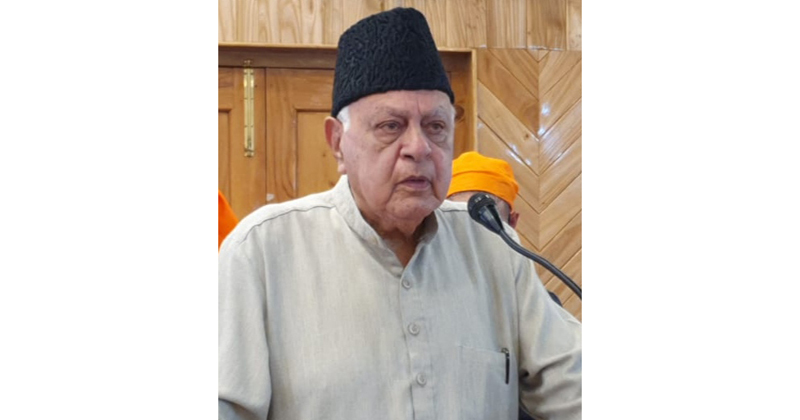 Irfan Tramboo
Srinagar, Oct 13: Former Chief Minister and National Conference (NC) president Dr Farooq Abdullah today said that Kashmir is never going to become Pakistan, while it has been and will continue to remain an integral part of India.

Click here to watch video
Abdullah who offered condolences on the killing of Supinder Kaur-a teacher who was killed at a school in Eidgah area of Srinagar-at a Gurdwara in Baghat said that the killing of the innocent people who were trying to make their ends meet is a “murder of humanity”.
Visibly emotional, the NC president said that these people are trying to make Kashmir a part of Pakistan and that they are never going to be successful at any cost, even if they “kill” him.
“Remember this, Kashmir will never become Pakistan, it is an integral part of India and will continue to remain so, come what may. It will be a part of India even if they will come and kill me,” he said adding “we have to show courage and will have to fight them tooth and nail”.
While appreciating the people of the Sikh community to have stayed back in Kashmir when the situation was tumultuous, Abdullah said that Kashmir belongs to Muslims, Sikhs and Hindus. “When everyone was leaving, one community which stayed back is your community. You stayed back despite the telling circumstances keeping the fact in view that we have to live here and die here as well,” he said.
The NC president said that killing innocent; particularly the teachers who impart education to children and make them learn how to navigate through the ups and downs of life is not a “service to Islam,” and that those who are doing it are actually serving the devil.
“It is a teacher who teaches one about the ups and downs of life and killing such people is never going to be the service of Islam. They are serving the devil and the devil is destined for hell and these people will be in hell along with the devil,” he said.
“It is nothing but a gruesome murder of humanity, but we cannot do anything apart from remaining firm and courageous to face such elements,” he said.
Abdullah said that the people including Supinder who was killed by the “beasts” were innocent people who were navigating through the turbulence and were making their ends meet. “While we cannot do anything about it, we have to make sure and fight these people,” he said.
He aded that a divide among the communities which is being sowed across the country needs to stop while people of various communities living in J&K need to be courageous and fight such elements thoroughly.
“We don’t have to be afraid, they will never succeed in their designs, but the people from every community have to be courageous. People are being divided across the country and that needs to stop. If it continues then India will not exist,” he said.