NEW DELHI, July 26: Defence Minister Rajnath Singh on Sunday paid tributes to soldiers who made supreme sacrifice in protecting India’s sovereignty 21 years ago in Kargil.
The Defence Minister was accompanied by his Deputy Minister Shripad Naik, Chief of Defence Staff Gen Bipin Rawat, Indian Army Chief Gen MM Naravane, Indian Navy Chief Adm Karambir Singh and Indian Air Force Chief ACM RKS Bhadauria to pay tributes at National War Memorial near India Gate.
The Defence Minister in a tweet said, ”Paid tributes to fallen soldiers of the Indian Armed Forces who exhibited exemplary valour and made supreme sacrifice during Kargil War. #CourageInKargil.”
Earlier, in a series of tweets, Mr Singh said that the unwavering courage and patriotism of our Armed Forces has ensured that India is safe and secure.
”On the 21st anniversary of Kargil Vijay, I would like to salute the brave soldiers of the Indian Armed Forces who fought the enemy under the most challenging conditions that the world had witnessed in the recent history. #CourageIn Kargil,” he said.
”My gratitude to those who laid down their lives in the service of the nation. I bow to their families, who despite losing their loved ones, remained steadfast in their support of the national resolve in driving out the enemies from our territory,” Mr Singh said in another tweet.
”I am also grateful to those who despite becoming disabled in battle, continue to serve the country in their own ways and have set examples worthy of emulation by the Nation. #CourageInKargil,” the Defence Minister added.
Kargil Vijay Diwas is indeed the celebration of India’s proud tradition of outstanding Military service, exemplary valour and sacrifice, Mr Singh said.
The nation is observing the 21st anniversary of Kargil Vijay Diwas on Sunday, remembering its brave martyrs who sacrificed their lives to uphold and safeguard the integrity of the nation.
This day commemorates the success of ”Operation Vijay” which was launched by the Indian Army to recapture the Indian territories captured by the Pakistani intruders in the Kargil-Drass sector in 1999.
Kargil war took place from May 3 to July 26, 1999 after Pakistani troops were detected on top of the Kargil ridges.
Pakistan had started planning the attack in 1998 itself.
It is also believed that the proposal for such an attack was given by previous Pakistan Army chiefs to Pakistani leaders but the proposals had then been shelved fearing an all-out war.
Even the then Pakistan Prime Minister Nawaz Sharif claimed that he had no knowledge of such an attack till he got a call from his Indian counterpart Atal Bihari Vajpayee.
July 26 is dedicated to the Indian soldiers who made the supreme sacrifice to uphold and safeguard the integrity of the nation.
The soldiers fought legendary battles in Dras, Kaksar, Batalik and Turtuk sectors at heights above 12,000 feet. (UNI) 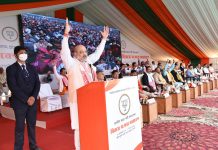