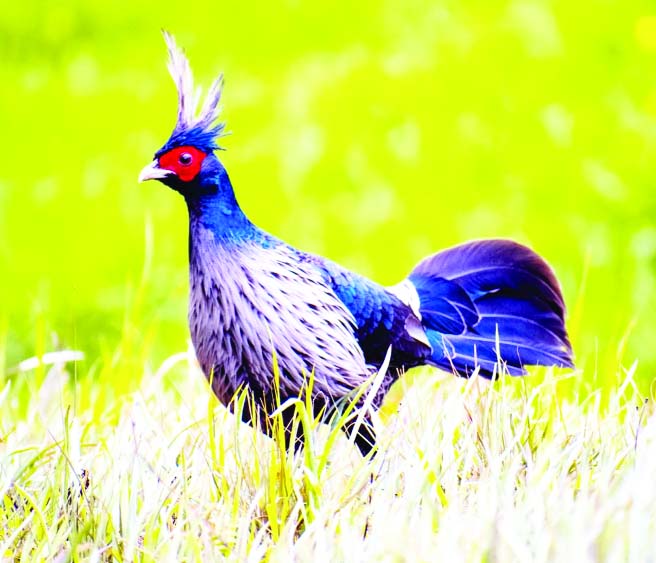 M Ahmad
On 21st October 2021, the Government of Jammu and Kashmir declared Kalij Pheasant as bird of the Union Territory of Jammu and Kashmir. Kalij Pheasant is known as “Wan Kokur”, in Kashmiri. The bird, which is also known as “Lophura Leucomelanos”, is found particularly in Mansar, Surinsar, Jasrota and Bhaderwah areas of Jammu and Aru & Uri in Kashmir.
This bird is best known for its beautiful feathers and the species has gray legs that make them super cute. The kalij pheasants are medium sized birds, males measuring 60 to 75 cm in length and weigh 800 to 1150 grams. The females are smaller measuring 50 to 60 cm in length and weigh 500 to 1000 grams. The males have glossy bluish black plumage and the females are brown.They inhabit evergreen and deciduous forests. They feed on roots, seeds, small reptiles, insects and forest yams. A distinctive pheasant is with bare red facial skin, a backward-pointing crest, and a vertically compressed tail. Males are iridescent black and silver. Females are grayish-brown. Coloration varies considerably throughout its range, with northeastern birds averaging the darkest. Occurs in forested areas, usually in hilly or mountainous regions.
They breed during May and June.The female pheasant lays between 6 and 10 eggs per clutch, which the female will incubate for approximately 25 days, however they have been known to sometimes lay and sucessfully raise 2 clutches of eggs in a single season. Pheasant eggs work perfectly served soft-boiled in their olive-green shells, keeping things plain and simple with a mere sprinkle of celery salt and buttered soldiers. They can also be hard boiled and used in salads, or fried for an indulgent, rich-flavoured posh fried egg. The male takes no part in protecting the nest but may rejoin the family after the chicks hatch
The kalij pheasant is a non-migratory bird primarily native to South Asia.The exact population of the species is not known as of now, but the IUCN Red List has listed these pheasants in the Least Concern category. These pheasants can easily be found in northern India, Nepal, and other neighboring countries.The kalij pheasant (Lophura leucomelanos) is native to several South and Southeast Asian countries.
The kalij pheasant is not endangered as the International Union for Conservation of Nature Red List has listed the species in the Least Concern category, despite the fact that a few subspecies have been decreasing over the year. These birds are commonly found in India, Thailand, Nepal, and other countries of South Asia.
The exact speed of the kalij pheasant bird is not known as of now, but a common pheasant of the same Phasianidae family flies typically at a speed of 27-38 mph (43-61 kph) and can fly up to 56 mph (90 kph) while avoiding predation.There are no specific names given to male and female birds of the kalij pheasant species. People generally differentiate males and females the colour of their plumage. Male birds have blue-black or gray-black feathers typically, while females have brown feathers.
The birds are comparatively less aggressive or dangerous to humans than some other birds, but they can attack if someone tries to come close to their nest or eggs.
(The author is Principal (I/C), Abhedananda Home-Higher Secondary Institution for Specially-abled Children, Solina, Rambagh, Srinagar)