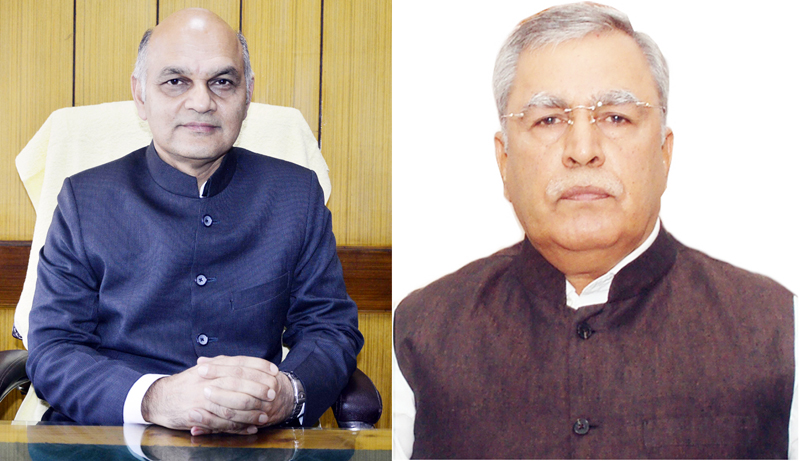 Neeraj Rohmetra
Jammu, Nov 14: Former bureaucrat K K Sharma and retired IPS officer Farooq Khan have been appointed as the Advisors to the Lieutenant Governor of the Union Territory of Jammu and Kashmir Girish Chandra Murmu.
According to an order issued by the Union Ministry of Home Affairs, the appointments of K K Sharma and Farooq Khan will be effective from the day of their joining in their respective posts and they will assist the Lieutenant Governor of Union Territory of Jammu and Kashmir for effective discharge of his functions.
The MHA has asked the Lieutenant Governor to issue necessary orders with regard to the terms and conditions under intimation to the Ministry.
Both Sharma and Khan were among five Advisors to former Governor of the erstwhile State of Jammu and Kashmir, Satya Pal Malik. The other three Advisors were K Vijay Kumar, K Skandan and Khurshid Ahmed Ganai.
However, following bifurcation of State into two Union Territories the Ministry of Home Affairs decided to appoint only two Advisors to the Lieutenant Governor of Union Territory of Jammu and Kashmir.
K K Sharma, a 1983-batch IAS officer of the Arunachal Pradesh, Goa and Mizoram Union Territories (AGMUT) cadre, belongs to Billawar town of Kathua.
During his service career spanning around 30 years, Sharma has held various positions including the Chief Secretary of Delhi and Goa. He also served as Secretary in the Ministry of Human Resource Development (MHRD) before his retirement.
K K Sharma has also served as Advisor to the Administrator of Chandigarh before being appointed as Chief Secretary of Goa and then Chief Secretary of Delhi. He is known to have played a key role in implementing flagship projects in Delhi in the areas of education and health.
Prior to his appointment as Advisor to former Governor, Farooq Khan was Administrator of Union Territory of Lakshadweep, the post which he quit at a time when he still had tenure of two years.
After his retirement from the services as Inspector General of Police, Farooq Khan had joined the Bharatiya Janata Party and had been appointed as its national secretary before being designated as Administrator of the UT of Lakshadweep.
Farooq Khan had held various prestigious postings in Jammu and Kashmir in the Police Department, the last one being Director of Sher-e-Kashmir Police Academy Udhampur. He was the first Muslim from Jammu and Kashmir to get a prominent place in the BJP within 15 months of his joining the party. He had joined the BJP at an election rally in the presence of Narendra Modi in 2014.
He had shot to prominence in mid 1990s when he became the first head of the anti-militancy task force popularly known as Special Operations Group. He had led various successful anti-militancy operations in Jammu and Kashmir and led to the clearing of the Hazratbal shrine in March 1996 in which 18 militants were killed. Moreover, it was under him that Raghunath Temple in Jammu city was cleared from the militants in 2003.
His grandfather Colonel (retd) Peer Mohammad Khan, who was in the Army of Maharaja Hari Singh, was the first State president of the Jammu and Kashmir Jana Sangh.