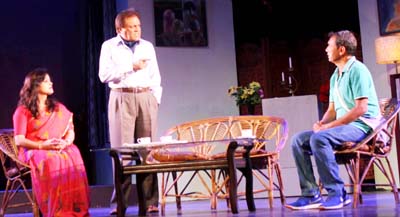 Excelsior Correspondent
JAMMU, Mar 30: Rangayan Bhopal’s presentation of the Hindi play, ‘Jungle Me Khulne Wali Khidkee’, for its realism and matter of fact set design, came as a contrast to the yesterday’s high voltage American play marked with post modernistic production design.
Inspired from Polanski’s Oscar-nominated film, ‘Knife in the Water’, and written by Jitendra Bhatia and directed by Prashant Khirwadkar, today’s play, a social drama exposed the hypocrisy and deception of the capitalist society, the deteriorating values of social and human relationships, and the zest in individuals to come out of the murky clouds.
The play opened with a business tycoon, Tej Bahadur Saxena and his wife Savitri, who arrive late at night to their Khandala bungalow for spending a long weekend during Holi. A young boy knocks at their door to seek refuge from the rainstorm. After permitting him to spend a night, Saxena, the pompous male egotist, sees this as an opportunity to display his superiority in front of his wife. During the course of the night, he keeps on insulting and belittling the youth while the wife, who still has some values left, sympathies with the youth. Series of events occur and the docile, submissive woman transforms into an open, progressive, and aware woman.
The play characterized by text-heavy dialogs was staged in the evergreen realistic genre where the onus mainly lies with the actors to carry the play by their acting skills.  The well-knit performances by veteran theatre, film, and TV actor Rajeev Verma as Tej Bahadur along with Mahua Chatterjee as  Savitri and Pravin Mahuwale as Boy, kept the audience engrossed in the play which on the surface looked packed with suspense, status war, sexual tension, and thrill.
Tomorrow, on the penultimate day of ongoing Jammu Chapter of 8th Theatre Olympiad, organized by the National School of Drama, in collaboration with J&K Cultural Academy, ‘Macbeth’ in Manipuri will be staged by Chorus Repertory Theatre, Imphal, will stage ‘Macbeth’ under the direction of internationally acclaimed theatre director Ratan Thiyam.

Fake PRCs will end after issuance of Domicile: Sethi

Gursai-Pathanatir road incomplete even after 12 yrs

No relief to suffering people from BJP Govt: Bhalla

Kalakaar Association for relief to artists