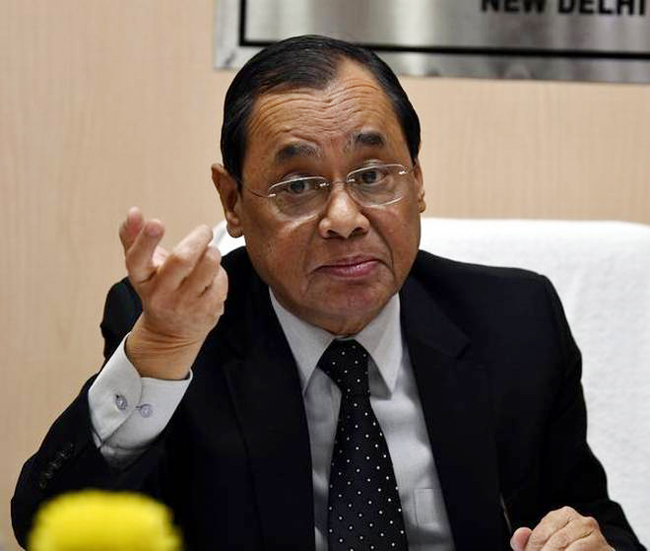 NEW DELHI, June 19:
Stressing that independence is the soul of judiciary, Chief Justice of India Ranjan Gogoi said the institution should stand up to populist forces and protect Constitutional ethos from being desecrated.
Speaking at a conference of chief justices at Shanghai Cooperation Organisation at Sochi in Russia, the CJI Tuesday said the judiciary should prepare and strengthen itself about such populist onslaughts on the independence of the Institution.
“In some phases in the journey of a nation, when the legislative and executive wings get swept away from their duties and goals under the Constitution by waves of populism, it is for the Judiciary to rise and stand up to the populist forces and protect the Constitutional ethos from being desecrated by the populists. To some critics and naysayers, this situation presents a case for hoisting the classical counter narrative – Unelected Judges, acting under the Constitutional mandate, get to overturn the acts of the elected majority.
“However, it is for us to recollect that such situations across the world have heaped tremendous pressure on the Judicial organs, and it is no surprise that in some jurisdictions Judiciary too has succumbed to populist forces. This is also an area that requires Judiciary to prepare itself, to strengthen itself about such populist onslaughts on the independence of the Institution.
“The human agency, through which justice is sought to be administered, has to be adequately secured and fortified in ordinary times, so that it is sufficiently equipped to deal with such forces of populism in extraordinary times, lest they overrun the judicial edifice too. This would be our strongest case for strengthening the independence of Judiciary,” the CJI said.
Gogoi said that independence is the soul of a judiciary and if it fails to enjoy public confidence, its deliverables would never constitute ‘justice’.
“Whatever be the political system of governance, people across Nations aspire for a Free and Independent Judicial system to serve them. In fact, such aspirations are common to, and bind different judicial systems across the comity of nations. If a Judicial system fails to enjoy public confidence, its deliverables would never constitute ‘justice’ – conversely, if the deliverables of a judicial system are not known to be impartial, just, equitable and appealing to good conscience, such system would never earn public confidence and high esteem in the minds and hearts of the common citizens,” he said.
The CJI said that independence of judiciary is not a one- time pill but a ‘state of affairs’ that has to remain constant to defend the system from the forces which are disturbing such ‘state’.
He said independence of judiciary as an institution is different from independence of judges as the fountainheads of justice.
“I must hasten to add here that despite such institutional independence being different, in its ambit and requirements, from individual independence of judges, we must recognise that both are mutually interdependent and both are vital for any Judicial system to be known as strong and responsive.
“Proponents who call for a strong and independent judiciary would assert that in the absence of institutional independence of judiciary, independent functioning of Judges cannot be assured and similarly, without strong and independent Judges, the ‘institutional independence’ of the ‘Judiciary’ would be a misnomer and futile,” the CJI said.
He said that non-political appointments, security of tenure and rigorous procedure for removal, securing the reputation of and remuneration and immunities for the Judges, in-house accountability procedures, and implementation of code of judges’ conduct are some of such measures which can secure the independence of judiciary.
“Strengthening of Institutions works best when they are strengthened from within and not when strength is sought to be infused from an external source. Strength that evolves from inside, touches the character and core of the Institution; in contrast, an external source could only lend ‘support’ to the Institution. Such external support would rarely strengthen the core of the Institution,” he said.
Gogoi said that the judicial organ does not and can never win over friends – because Judiciary is not meant to be in the business of making or breaking of relationships, bonds, alliances nor does Judiciary pander to any constituency.
“Every Court of Law may seem like an island, existing in isolation and sovereign within its bounds, yet Judiciary and all its components are bound by common threads that are difficult for someone who is not a stakeholder to even begin to understand.
“It is in this backdrop that amongst the several steps that would be required to strengthen the independence of judiciary, the foremost would be to develop and nurture leadership at all levels of the Institution.
“This is one area where Judiciary is required to work hard in the coming years. Leadership roles bring decisiveness and direction at all levels. For the Institution to secure its independence, it is imperative that leaders at all levels of the Institution are on the same page and they think, act and speak likewise,” he said.
CJI Gogoi said that leadership skills at ground level will also assist in securing independence of individual judges and without which institutional independence it may be reduced to a mirage.
He said that besides investing in leadership roles, judiciary also needs to work on securing its independence in financial matters. (PTI)