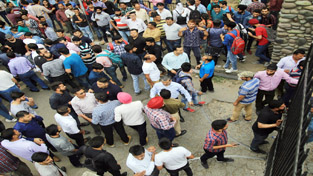 JAMMU, Apr 3: Fearing more trouble Jammu University administration has announced no class work tomorrow as functioning of the University was completely disrupted today after  the protesting students forced closure of all the entry gates of the campus thus not allowing  the JU employees to enter the university premises this morning.
The  chaos like situation forced the JU administration to informally announce  holiday today also after a few employees managed to sneak into the campus and narrated their ordeal before the Negotiation Committee, headed by Prof Jigar Mohd, who is presently Acting Vice-Chancellor as the incumbent Prof R D Sharma is out of station.

Click here to Watch Video
The protesting students, who are agitating for removal of  Prof Satnam Kour as Dean Students Welfare and in support of their other demands, forcibly closed all the entry gates of the university  this morning and did not allow the JU  employees to enter the campus.
The high voltage drama in front of the JU main gate continued for more than two hours since the morning,  during which the  teaching and non-teaching employees  were forced  to remain outside the campus. Even as no untoward incident took place during the stand- off, a few non-teaching employees were heard urging the students not to harass them as they had no role in conceding their demands.
Pertinent to mention that Jammu University students are protesting for the last two weeks seeking wi-fi and  round the clock food facilities at the university hostel, installation of CCTV cameras, etc. They are also protesting removal of Prof Satnam Kour as Dean Students Welfare, who had allegedly beaten up a student following which the protesters had ransacked DSW office and consequently JU ordered suspension of five students.
The students have announced to continue their strike till all their demands are conceded by the Jammu University, which has constituted a Negotiation Committee in this regard.
Pertinent to mention that normal functioning of the university has been hit by  continuous strike by the students, who had virtually chased Vice-Chancellor Prof R D Sharma yesterday forcing him to leave the campus in a huff.
Meanwhile, in an attempt to avoid trouble, JU administration issued a notification late this evening announcing no class work on Wednesday.