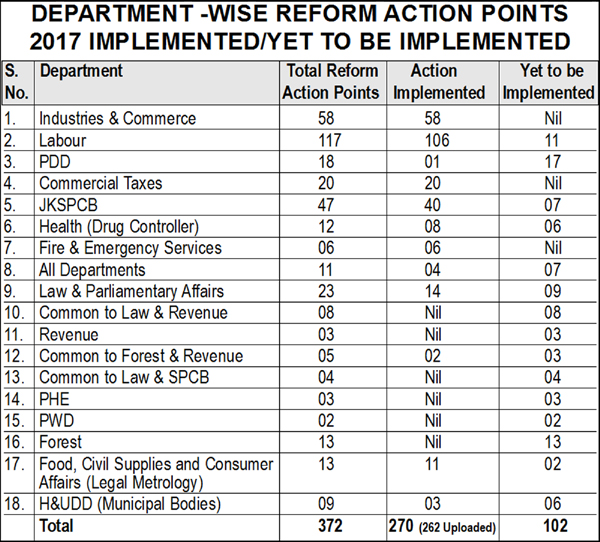 Mohinder Verma
JAMMU, Nov 14: Though Jammu and Kashmir’s Ease of Doing Business ranking has improved significantly during the current year yet non-performance on the part of several key departments particularly Power Development Department is creating obstacles in giving necessary impetus to industries and commerce sector in the State, which otherwise has immense potential to check growing unemployment among the youth.
Official sources told EXCELSIOR that Department of Industrial Policy and Promotion (DIPP) of the Union Ministry of Commerce and Industry in partnership with the World Bank Group released the Business Reform Action Plan (BRAP) under Ease of Doing Business initiative for the current financial year for implementation by all the States and Union Territories including Jammu and Kashmir on April 13, 2017 with a total of 372 recommendations.
The last date for uploading business reform replies/proof was November 7, 2017 and J&K has successfully implemented 270 recommendations and uploaded 262 replies out of total 372 recommendations, sources said while disclosing that as per the dynamic ranking by the Department of Industrial Policy and Promotion (DIPP) J&K stands at 22nd rank with 12.71 points as on date.
Stating that J&K’s ranking will improve further by December 31, 2017 when the process of analyzing the performance by the DIPP and World Bank Group will come to an end, sources said, “the DIPP has till date approved 56 replies out of 262 uploaded by the J&K while as it has sought clarification on 96 replies. Moreover, 110 replies are still pending for evaluation”.
Describing this as a significant jump in Ease of Doing Business ranking, they said that during last financial year J&K was ranked 31st in the final ranking by the DIPP, which in partnership with the World Bank Ground had proposed 340 point recommendations spread across 10 reform areas in Business Reforms Action Plan 2016.
Notwithstanding the significant improvement in ranking of J&K during the current year, non-performance on the part of several departments particularly Power Development Department is creating impediments in giving necessary impetus to the industries and commerce sector in the State, which is considered as the major sector having sufficient employment avenues for the unemployed youth.
As per the department-wise data, the copy of which is available with EXCELSIOR, Industries and Commerce Department was assigned a total of 58 reform action points and it has succeeded in implementing all the points. Similarly, Commercial Taxes Department has implemented all the 20 points.
However, the Power Development Department whose cooperation is imperative to achieve the objectives behind the Ease of Doing Business initiative, has implemented only one point as against 18 points assigned to it thereby establishing non-seriousness on the part of those at the helm of affairs in this department.
The Labour Department has implemented 106 out of total 117 points assigned to it while as J&K State Pollution Control Board has implemented 40 out of 47 points. The Drug Control Organization has implemented 8 out of 12 points while as Law and Parliamentary Affairs Department has implemented 14 out of 23 points.
The Revenue, PHE, PWD and Forest Departments have not implemented even one reform action point while as Food, Civil Supplies and Consumer Affairs (Legal Metrology) Department has implemented 11 out of 13 reform action points. The Housing and Urban Development Department has implemented three out of 9 action points.
The areas where the reforms have been implemented by the Industries and Commerce Department are inspector enablers, single window system, access to information and transparency enablers, land availability and allotment and construction permit enablers etc,
It is pertinent to mention here that Ease of Doing Business is an index published by the World Bank and it is an aggregate figure that includes different parameters which define the East of Doing Business. The ranking on the index is based on the average of 10 sub-indices, which include starting a business; dealing with construction permits; getting electricity, registering property; getting credit; protecting investors; paying taxes; trading across borders; enforcing contracts and resolving insolvency.
The DIPP has taken up a series of measures to simplify and rationalize the regulatory processes (registration and inspection processes) and introduction of information technology as enabler to make governance more efficient and effective.
A 98-point Action Plan for improving the regulatory framework for business as part of Ease of Doing Business was finalized at National Workshop of ‘Make in India’ held on December 29, 2014. The assessment, first of its kind, is promoting both competitive and cooperative federalism among the States and the Union Territories.