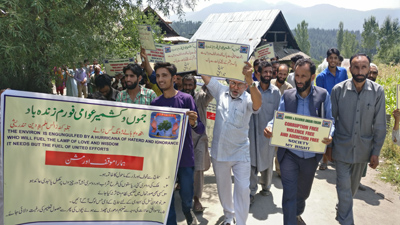 Excelsior Correspondent
KUPWARA, Aug 4: Jammu and Kashmir Awami Forum (JKAF) here today led a march for peace, calling for an end to the gun culture in Kashmir valley.
Two weeks before over 1000 people came on roads speaking against the cross border terrorism in a similar march.
A handout of the Forum stated that Kupwara district has been on the receiving end of the cross border infiltration and sponsored terror.

Click here to watch video
Today’s march passed through villages Hachmar, Tumna and Chokibal from where more people joined in seeking freedom from gun culture and the sheer fear in which the valley’s residents are living every-day.
Participants in the march included the nomadic Gujjar Bakarwal community who have suffered from social abuses and also the Pahadi communities.
The first march by this Forum last month with a similar call to end militancy had seen over 1000 people including men, women and children as participants marching from village Kani-e-Dajan in Budgam district to the holy place of Charar-e-Sharif.
Along the route, activists from Barna Pathan Chalyan, Batpora, Zeepanchal, Dalwan and Pakharpora villages had joined this long march.
On this occasion, Spokesperson of Forum G.N Parwana said, “This is a platform of all likeminded people working towards bringing in a militancy free, corruption free and addiction free society.”
He further added that this was just the beginning and coming months will see more such programmes and gatherings of locals to stress their need for peace and end to violence.
“All well-meaning Kashmiris and those who genuinely want to end this across-the-border sponsored terrorism will join our movement,” he maintained.
Forum’s District President Kupwara, Mohd Irfan said: “On behalf of all youth members, I want to thank my core team for linking us with the Paigam-e-Mohabbat programme. I also thank Gurudev Sri Sri Ravi Shankar who lit the candle of hope during his visit to the valley earlier this year.”
Today’s march comes as the third display of people’s anger and frustration against militancy over the last few months, marking a clear call from ordinary citizens against the divisional forces that are working to alienate the valley’s residents.
Forum head Farooq Abdul Ghani while speaking on the occasion stressed on peace and end to cross border terrorism.