E-Paper
Home Todays story J&K was broken State, not a single soul cried when leaders were... 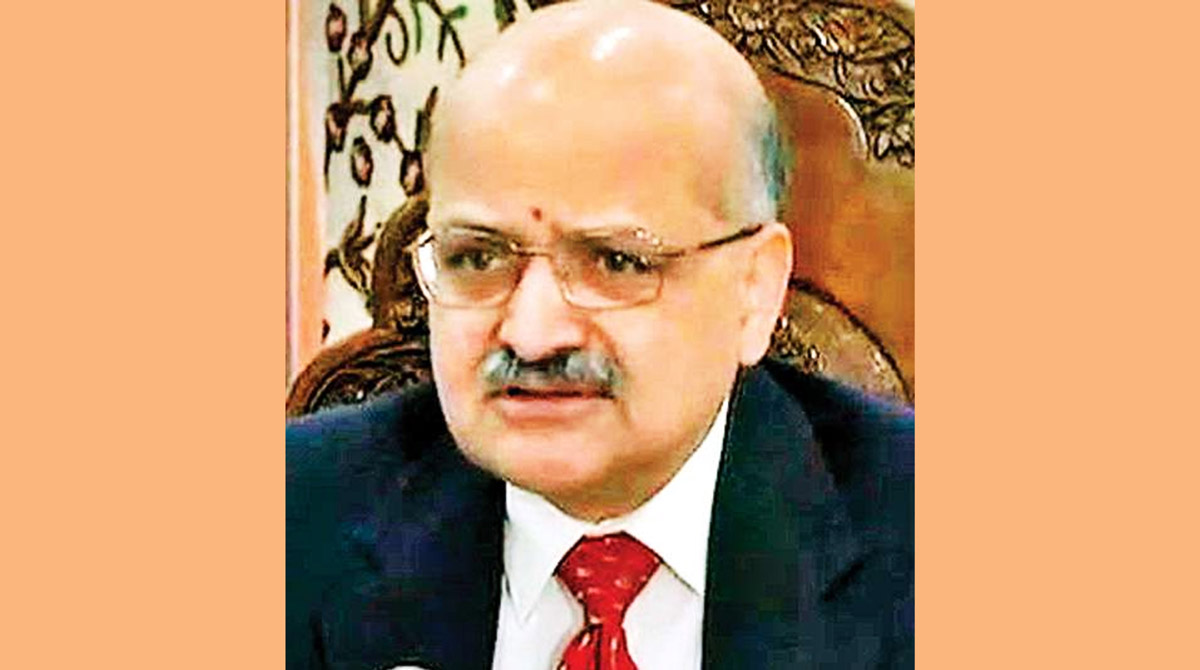 ‘There were frauds everywhere, JKB CMD was scamster No.1’

SRINAGAR, Aug 7:
People in Jammu and Kashmir have to keep patience to enjoy a whole lot of benefits of the Centre’s move to nullify Article 370 as many positive initiatives have not been rolled out fully yet, Chief Secretary BVR Subrahmanyam has said.
Click here to watch video
Jammu and Kashmir was a “broken State” and there was “no system” in place due to years of misgovernance, corruption and “unbelievable levels of fraud” committed by leaders of mainstream parties and separatist organisations, he said.
Therefore, not a “single soul had cried” over the detention of political and separatist leaders in August last year, when the Centre announced its decision to revoke Jammu and Kashmir’s special status under Article 370 of the Constitution, he added.
Subrahmanyam, a 1987-batch IAS officer who was hand-picked by Prime Minister Narendra Modi to “clean up” the Jammu and Kashmir administration, said mis-governance and corruption had continued for so long that the system collapsed from inside.
“People have to be patient to get a whole lot of benefits after the abrogation of Article 370 as what had happened on August 5 last year, have not been rolled out fully (yet),” he told a group of visiting journalists here.
On August 5 last year, the Central Government had announced abrogation of Article 370 provisions and bifurcation of the erstwhile State of Jammu and Kashmir into Union Territories (UT) — Jammu and Kashmir, and Ladakh.
Subrahmanyam said before he came to Jammu and Kashmir in June 2018, he met the Prime Minister and sought his guidance for his new assignment.
“The Prime Minister told me: Go, clean up the administration, rebuild it and hand over the ‘amanat’ (precious possession) to the local people,” he said.
The Chief Secretary said he has been working sincerely to create a robust institutional infrastructure which is free of corruption.
“There was a terrible situation here. Things were designed for corruption. Mis-governance and corruption were for so long that the system has collapsed from inside. The whole state was a big ponzi scheme,” he said.
Subrahmanyam said there were scores of incomplete projects, land acquisition was a big scam and there were instances when doctors working in the Middle East were drawing salaries in Jammu and Kashmir as it had no system of monitoring.
He said frauds in Jammu and Kashmir were at “unbelievable levels”. “There were frauds in jobs, frauds in projects, frauds were everywhere”.
“The JK Bank CMD was the scamster number one. Twenty families or a maximum 30 families milked the JK Bank. There was no accountability. All other PSUs (Public Sector Undertakings) in other States submit their report to the Assembly, the PSUs in other states come under RTI, CVC (Central Vigilance Commission). But the JK Bank is accountable to none,” he said.
The Chief Secretary said Jammu and Kashmir was a “broken State, the governance was broken badly, there was no system, no rules and the decay began a long time ago”.
“We are reconstructing things which were crumbling,” he said.
Asked about how people felt one year after the abrogation of Article 370, Subrahmanyam said common men are not bothered about Article 370, what they expect is jobs, growth and development and the administration is working in that direction.
He said once the administration delivers development, create jobs, people will realise the positive sides.
“Delivery will happen. Reconstruction of the UT is not an overnight work. It takes time. The work is on,” he said.
The Chief Secretary said three stages of transition have been going on in Jammu and Kashmir.
They are transition from Jammu and Kashmir Constitution to Indian Constitution, bifurcation of the State and then transition from State to UT.
“There have been lots of changes. Separation of three lakh employees were done in just 15 days. The UT rules were made. We had to prepare budget for five months from October 30 to March 31. Then again budget from April for the whole financial year. Division of assets and liabilities have not been finalised yet,” he said.
Subrahmanyam said Rs 6,500 crore worth of projects had been lying incomplete that include a 26-year-old project to construct a bypass in Baramulla. “We have already sanctioned Rs 2,500 crore to complete all these incomplete projects,” he said.
Asked about the security situation in Jammu and Kashmir, Subrahmanyam said, “The day I can drive down to Pulwama just with my driver without police escort and pilot, we can safely say that the peace has returned to Jammu and Kashmir.”
Pulwama is considered to be a hotbed of militancy. A bus carrying CRPF jawans was blown up by terrorists in Pulwama in February 2019, martyring 40 personnel.
By-elections to all vacant posts of Panchs and Sarpanchs in Jammu and Kashmir will be held as soon as the coronavirus situation improves, Subrahmanyam said.
About 12,600 posts of Panch and Sarpanchs, out of nearly 40,000, are currently vacant.
The vacant posts are mostly in Kashmir valley.
“We will hold bypolls to the vacant gram panchayat posts once COVID-19 goes off. In fact, we had plans to hold the bypolls by February-March. But coronavirus delayed the whole process,” the Chief Secretary said.
Describing the panchayat elections, held in 2018 as “good elections”, Subrahmanyam said funds were flowing to the panchayats where different development works were carried out for the benefit of the people.
According to an official estimate, 11,457 Panchs and 887 sarpanch seats are vacant in Kashmir, while 182 Panchs and 124 Sarpanch seats are vacant in Jammu division.
When the bypolls to the Panchayats will be held, they will be the first elections in Jammu and Kashmir after the abrogation of Article 370 and bifurcation of the State into two Union Territories in August, 2019. (PTI)