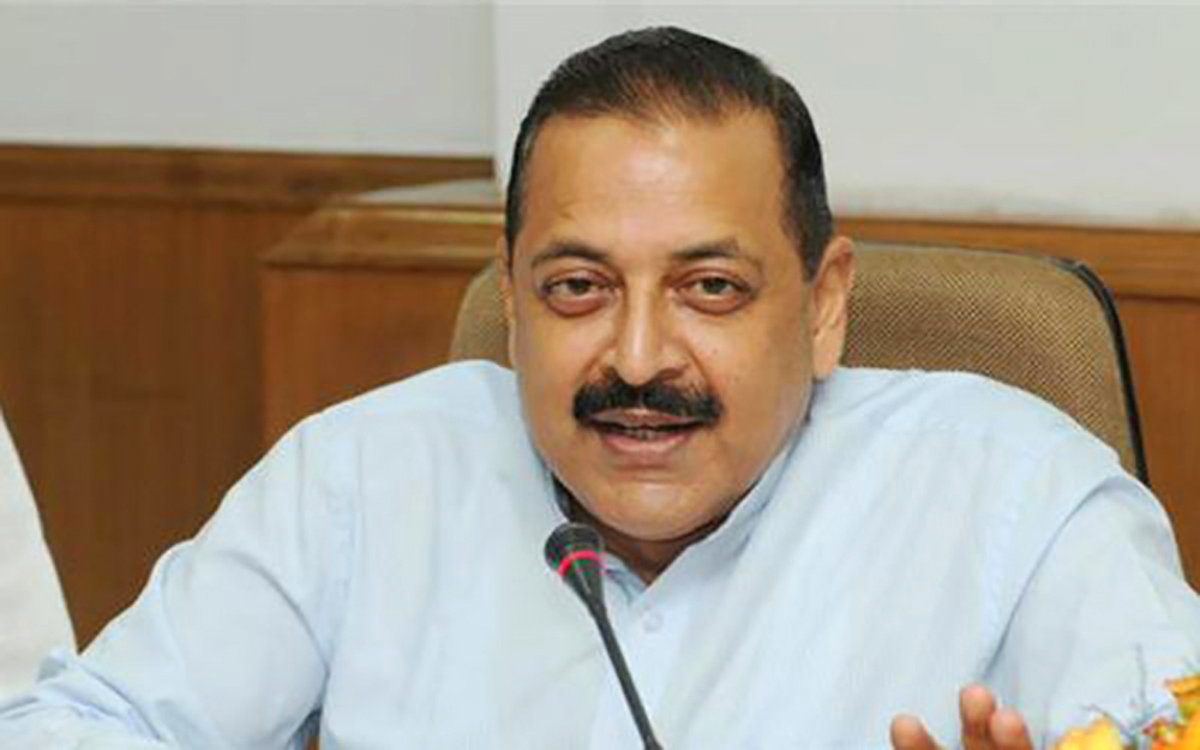 Avtar Bhat
JAMMU, Sept 10: Terming the abrogation of Articles 370 and35 -A a path breaking decision of Narendra Modi Government, Union Minister of State with independent charge of North Eastern States, Dr Jitendra Singh today said that 100 days achievement of the BJP Government at Centre is more than what could have been attained in 100 years.
Dr Jitendra Singh, who was talking to reporters here on the completion of 100 days of Modi Government in office during its second term said with the tremendous will power and determination, the Modi Government carried forward its agenda and fulfilled the promises made with the people of the country.

Dr Jitendra Singh, while giving full credit to Modi Government for abrogation of controversial articles and reorganisation of the State, said that no body can understand value of Art 370 abrogation better than some one living in J&K who were subjected to discrimination and injustice over seven decades by the ruling class for their vested and narrow political interests.
He said “with the abrogation of Articles 370 and 35A as well as reorganisation of J&K into two Union territories we brought it (J&K) into national mainstream.” He expressed hope that the economy of the State will be better under the new dispensation”.
He said now J&K and Ladakh have become absolute territory of India and the people living there are first citizens of India now.
He said that after the abrogation of Articles 370 and 35 -A the world view has come round the India and the nations who were talking in other way have now come round the Indian view.
He said there is no resentment anywhere against the Modi Government decision and people in J&K especially the common Kashmiri is happy over it. “Only those are in problem who were taking the advantage of mayhem and disturbing situation over the years”, he added.
Dr Jitendra Singh termed the Bill on Triple Talaq also another great achievement of Modi Government saying that earlier ruling parties tried to play safe on it but the Modi Government mustered courage to bell the cat which others did not dare to do earlier.
Warning the separatists and semi separatists, he said that unlike previous Governments no leniency will be shown to those indulging in unlawful activities and they will be dealt seriously under the law of land. “Any one instigating any body or propagating anti India thought has to face the law as we have tightened the noose on such elements”, he added.
He however, in response to a question, said that UT will be transferred to State back in due course of time and maintained that it will not take 72 years which took in abrogation of Article 370 from J&K.
While defending every decision of Government, he said Modi Government policies are based on candidness, conviction and consistency. Giving full credit to country for treating the minorities at par with majority community, he said that there is no discrimination between people belonging to one community and the other. Dr Jitendra Singh said the treatment meted out to minorities in India has no match any where in world including Pakistan.
Dr Jitendra Singh, while candidly admitting that Jammu was subjected to discrimination by previous governments said that there was no such discrimination and injustice during Modi Government and in comparison to that more funds were given to Jammu during past five years.
The Union Minister said that India is committed to joint Parliament resolution of 1994 on PoJK saying that next agenda of Modi Government is retrieving of PoJK from clutches of Pakistan.
He also denied that there is curfew in Kashmir Valley or the Valley has been closed and said that there are restrictions in some areas but situation is calm and under control.
Dr Jitendra Singh, while justifying Modi Government action on separatists and “anti national elements” in the State said that such action was never taken before by any Government. He said those involved in Hawala transactions were dealt under law and asserted that Modi Government will act as a deterrent to keep the law and order under control and check.
Replying to a question on the vicious campaign launched by Pakistan on abrogation of Article 370, the Union Minister said the world view is aligned with India. As part of a nationwide campaign to highlight the 100 days of bold initiatives by the National Democratic Alliance government, Dr Jitendra Singh said “had (Jana Sangh founder Syama Prasad) Mookerjee been alive, he would have declared ‘go and tell the world that Modi and Amit Shah have abrogated Article 370′.”
“Now the time has come, history would decide this… Whether Nehru or Mookerjee was right? The moment of judgment has arrived”, he said.
On the return of Kashmiri Pandits to the Valley, he said, “Once the conditions are conducive, you do not have to make up a plan. They will themselves voluntarily go back as it is vicious to live outside their home land.” He said that this is going to be the last phase of militancy in Kashmir. After this, he added, not only KPs but many others will be looking forward to head to the Valley.
On an Amnesty International report on security forces, he said he was sure that concerned agencies are taking cognisance of it. “There are 101 human rights violations being committed in various states of America. All narcotics are happening from US. Government is now in the process of banning electronic cigarettes, which comes from the US. That country, which blames us for rights violations, is benefiting from the trade of it,” he added.
Deputy Director Press Information Bureau, Neha Jalali earlier gave brief of Modi Government’ s 100 days achievements to media persons.