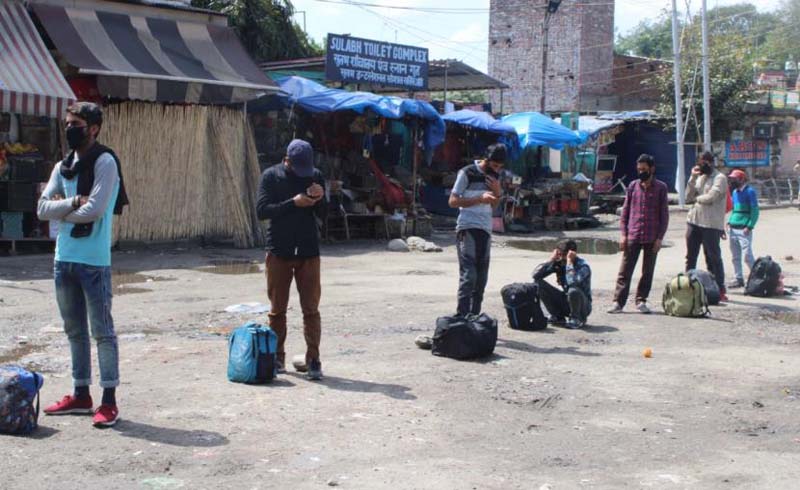 Many outsiders also held up in Jammu

JAMMU, Mar 28: Several people from the Union Territory of J&K remained stranded in different States of the country including New Delhi, Punjab, Haryana, Himachal Pradesh, Rajasthan etc and were sending distress calls to the UT Government for their evacuation to the home towns as lockdown entered into sixth day today.

Click here to watch video
Excelsior office also received number of telephonic calls, emails and messages through other modes of communication from students, youth working in private sector and other workers from Rajasthan, New Delhi, Gurugram in Haryana and other places seeking intervention of the administration in their evacuation from different places where they were stranded.
Students, youth and workers said since there were every apprehensions that countrywide lockdown could linger on they were facing extreme shortage of money, ration etc and the State Government and administration, where they were stranded, were not coming to their rescue.
“The J&K Government should take initiative with the State Governments to arrange our evacuation so that we can reach our houses and unite with our families otherwise we will starve to death,” they said and wondered what was the problem with the administration in evacuating them as they can arrange buses and isolate them by keeping few of them in the vehicles separately and then keep them for quarantine.
Meanwhile, amid the ongoing lockdown to prevent the spread of Coronavirus, hundreds of stranded people from different parts in Jammu have also appealed to the UT administration to arrange transport facilities, saying they feel more vulnerable in the absence of proper arrangements.
A large number of people, including migrant labourers, from outside are stranded in Jammu after the administration ordered a shutdown of all establishments except those providing essential services and commodities across the Union Territory on March 22.
Hailing from different parts of Jammu and Kashmir, the anxious people said they are shuffling between the bus stand and the Deputy Commissioner’s office here over the past one week with the hope to attract the attention of the authorities towards their plight.
Mohammad Akram Najar, a resident of Kralgund village of North Kashmir’s Kupwara district, was among dozens of the stranded passengers waiting for a word from the Deputy Commissioner’s office at Wazarat Road here.
“I was in Kot Balwal jail for the last one year and was released only two days ago. I do not have any place to live here and I am desperate to reach my home,” Najar said.
Tameshwar Singh, a resident of Tathri village of Doda district, said he had been visiting the bus stand and the DC office for the last three days, but to no avail.
“We are not infected with the virus but if the situation continues like this, we are afraid of getting infected,” Singh, who was holding his minor child in his arms, said.
A girl, also hailing from Doda, said she was working at Toll Plaza when suddenly the lockdown came into effect, leaving them stranded. “My family is very concerned about my lodging, boarding and safety,” she added.
The Government should take note of our pleas and immediately arrange the bus service so that we are united with our families at this hour of crisis,” she said.
Three youths, hailing from Kishtwar district, said they have not eaten proper food for the past four days due to the lockdown and if the situation continues like this, “we will die of starvation rather than Coronavirus”.
“We had come here for mourning following the death of my brother-in-law at his Indira Nagar residence last week. All the mourners are now holed up here and some running short of medicine,” said another resident, hailing from a village along the Line of Control (LoC) in Poonch district.
Ghulam Mohammad Khan, a resident of Kishtwar said, he visited the DC office on Thursday and enrolled himself in the list of stranded passengers with all details, including the phone number.
“I am still waiting for the call which will take me to my home,” he said. A woman, who was waiting along with her daughter, said they want to return to their home in Poonch.
“My daughter is studying here and her hostel was shut; my two other children are in Rajouri and we are very perturbed due to the prevailing situation,” she said.
A large group of migrant labourers from different parts of the country is also putting up at Jammu Railway Station and wants the administration to arrange transport facility.
Several government and non-government organizations have arranged food for the stranded people at the bus stand and railway stations over the past few days.
Meanwhile, 63 persons hailing from the twin border districts of Rajouri and Poonch were today sent to their homes in two SRTC buses from Jammu Bus Stand under special permission of the administration.