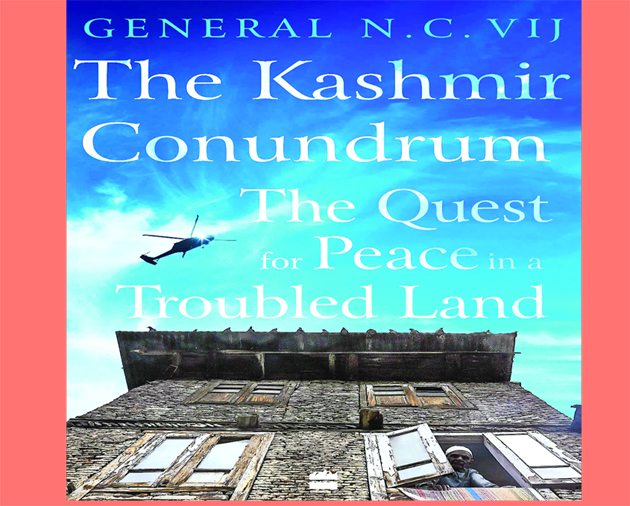 Rarely does a book on J&K, owing to its inherent complexities, carry such an insightful aura within its leaves. Most of the subject experts generally, dwell on a single or at most two different overlapping topics. But Gen NC Vij being a state subject and a native of Jammu has clearly departed from this practice and has explicitly underlined his steadfast resolve of presenting J&K’s conflict in its entirety since its accession to the wider world. He says “Since I have seen the unfolding of this sordid story in varying capacities, I feel that It’s my professional responsibility to share my experiences and with our soldiers and countrymen, as an offering of my deep respect and love for the Indian Army”. Gen Vij, after acutely underlining the regional diversity of the erstwhile state, has effectively been able to communicate the various fault lines prevalent therein. The quagmire thence generated has been dealt with quite magnificently, which makes a reader like me, understand the veritable complexity involved within the state, courtesy of its multi-ethnic, multilingual and multi-religious nature. The author has hit the nail on its head by calling out the failure of the Kashmir-centric leaders failing in their prime responsibility of plugging the gap that existed between Delhi and Srinagar, by constant machinations for securing their personal fiefdoms. He has chronically arranged the entire sequence from accession till the amendment of Article 370 and abrogation of 35A, with the intervening sections covering periods of wars with Pakistan and a gamut of other socio-political issues and their possible fallouts. In this process, the author seemingly has, most of the times, owed his fealty to the facts than to passions or his personal biases, while ensuring that the thematic understanding of the subject in focus, remains paramount.
Being a former DGMO, Vice Chief of the Army Staff and the then Chief of the Army Staff has lent the author enough fodder material, while being in the thick of things, where he could, without ensconcing himself within the cliched and trite bubble of platitudinous charades, have written about Kargil Operations, though in short, and the installation of the LOC fence which began under his tenure in 2003. The most interesting portion of the book is the ‘Perception Management’, where the author has urged “to understand the role and characteristics of social media, the mindset of terrorists, and the impact of technology in perception management”. He has highlighted the role of the internet and the mass media in shaping of the cognitive domain via an ‘information sphere using all possible means. Contrary to my personal beliefs, the author has even sanctioned the use of deception and information manipulation for bringing up this change. Additionally, he has also been critical of the present internal governance system which has shrunk the space for the popular dissent via its institutions- including media, leading to further alienation of Kashmiris from the mainstream. The book, in the process has also delineated the gradual evolution of the India-Pakistan relations, in which J&K has always played a pivotal role. It also evinces the changes post the after the abrogation of article 370, and evaluates future possible strategies of Pakistan to keep the Kashmir issue fresh and alive. A significant portion of the book has been devoted to the cause of providing possible policy incentives to the government as well, in which the author has explored the possibilities of reining the terror infrastructure and conditioning of the societal apparatus by viable and inclusive means. Being a child of realism, Gen Vij has expressed his veritable stance of sustained measures, internally and externally, in social, economic, political and international terms, to bring steady peace in the region. He has underlined some clear goals in chapters titled ‘A Paradigm Shift’ and ‘The Road Ahead’ which, inter alia include
* Deradicalization measures wherein he implicitly emphasizes on the need to have a broad-based remedial measure in the valley to allay the fears of Kashmiris, especially post dissolution of this state.
* Appropriate delimitation process
* Needling Pakistan at appropriate time and place to make its involvement economically unsustainable in this proxy war etc
However, in this process, I have a grouse with the author in the sense that he failed to take into account the vast population of Jammu within this process of conflict management. The book, even while establishing Jammu’s predicament, remains too much focused-on Kashmir valley and being oblivious to the needs of Jammu hills which have suffered a great deal due to this brash period of militancy. Secondly, the maps which have been provided at the beginning serve little purpose. They should have been present within the chapters dealing with those events so as to match the reader’s domain.
Physically, the book- running for 412 pages is gripping and satisfies the reader’s desire as the paper quality is nice and font size is good. As is its wont, Harper Collins hasn’t disappointed with this hardbound book.
Overall, an unput downable, page-turner and irresistible treatise written in an extremely lucid language backed by expansive and broad-based research for any layman who wishes to get into the nitty-gritty of the policies, promises, and petitions that have shaped the polity and society of the erstwhile state of J&K with a clear vision for the future as well.