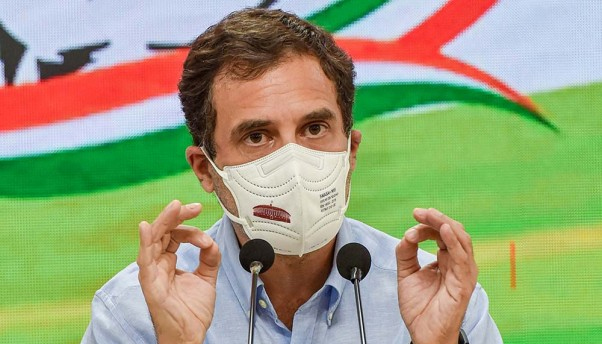 New Delhi, Aug 11: Congress leader Rahul Gandhi on Thursday condoled the death of soldiers in a terror attack in Jammu and Kashmir’s Rajouri district and said the country will always remember their sacrifice.
Two terrorists carried out a ‘fidayeen’ attack on an army camp in the early hours of Thursday, killing three soldiers. Both attackers were gunned down in the four-hour firefight that followed.
“The news of the terrorist attack on an army camp in Jammu and Kashmir’s Rajouri is very saddening. My humble tributes to the martyred soldiers, this country will always remember your sacrifice,” Gandhi said in a Facebook post in Hindi.
“I wish speedy recovery of the injured soldiers and peace for the martyred soldiers, and my deepest condolences to the bereaved families,” he said.
Congress general secretary Priyanka Gandhi Vadra also expressed sadness over the attack.
“Humble tributes to the martyred soldiers. The country will always owe you for this sacrifice. May God give peace to the souls of the martyred soldiers and speedy recovery to the injured soldiers. Deepest condolences to the bereaved families,” she said in a Facebook post in Hindi.
The army personnel killed were subedar Rajendra Prasad, hailing from Maligoven village in Rajasthan’s Jhunjhunu district, rifleman Lakshmanan D from T Pudupatti village in Tamil Nadu’s Madurai district and rifleman Manoj Kumar of Shahjahanpur village in Haryana’s Faridabad, public relations officer (defence), Jammu, Lt Col Devender Anand said. (Agencies)