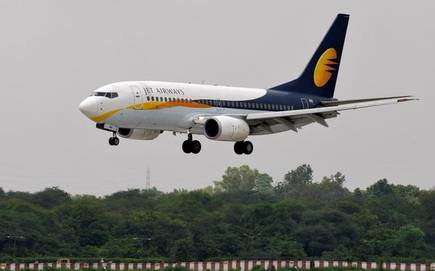 NEW DELHI : As they explore ways to recover debt, lenders of Jet Airways are in favour of a resolution outside the insolvency law framework in case the ongoing bidding process fails to take off, sources said.

Running into debt of more than Rs 8,500 crore, Jet Airways has shut down operations temporarily after lenders decided against extending emergency funds for its survival.

SBI, the lead lender of the seven-member consortium of domestic banks that have extended loans to the airline, has started the bidding process for stake sale in the carrier and clarity about potential bidders would emerge next month.

While lenders are “reasonably hopeful” of a successful bidding process, sources said banks are working on a plan B in case things don’t progress as expected.

If the bidding process fails, lenders would favour a resolution for the debt-ridden Jet Airways outside the Insolvency and Bankruptcy Code (IBC) framework, sources said. Recovery on the basis of existing security and tangible assets would be a preferred option, they added.

Under the Code, the National Company Law Tribunal’s (NCLT) approval is required for initiating the process, wherein the resolution would be market-linked and time-bound.

Outside the NCLT would be a better option as far as plan B is concerned, sources said, adding that then banks would realise better value from the aircraft and other tangible assets owned by Jet Airways.

Four entities — Etihad Airways, TPG Capital, Indigo Partners and National Investment and Infrastructure Fund (NIIF) — are learnt to have shown interest in picking up stake in Jet Airways. The details of initial bidders are expected to be known on May 10.

As they wait for completion of the bidding process, the lenders are also looking at options to raise funds from the carrier’s available assets, including utilising Jet Airways’ 16 own planes.

On Friday, sources said that lenders have been proactive and cannot be blamed for the current situation at the airline. “They (lenders) have been actively engaging with the company for almost nine months ever since the airline started incurring cash losses and have been urging the management to come forward with a definite plan for resolution.”

“Unfortunately, the management and the promoter delayed in taking a decision leading to the present situation. The lenders continued to support the airline during this period,” one of the sources had said. (AGENCIES)