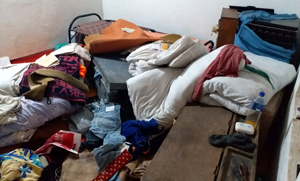 SRINAGAR, June 7: A soldier was killed and another critically injured in a militant attack on an Army patrol near the Line of Control (LoC) at Keran sector of North Kashmir’s Kupwara district today. Click here to watch video
Militants attacked Army’s 6 RR patrol near Kacchal Post in Keran sector adjacent to Chowkibal forests. As the troops retaliated, militants believed to be 5-6 fired indiscriminately upon the Army triggering a gunfight.
Two soldiers were injured in the encounter. The injured were evacuated to military hospital Drugmulla where from they were airlifted to 92 base hospital Badamibagh, Srinagar. One of the soldiers, Sepoy Sukhvinder Singh, later succumbed to injuries.  More troops have been rushed to the area and a massive operation has been launched against the group.
“Stand off attack by militants on own link patrol ahead of the LC fence in Keran Sector . Two soldiers suffered non-fatal injuries. Own troops retaliated.  Operation in progress,” Army’s Srinagar based Defence Ministry spokesperson Colonel Rajesh Kalia said earlier.
In the meantime, Army’s 27 Rashtriya Rifles at Paribal Tekri, in district Bandipora busted a militant hideout and recovered large cache of arms and ammunition during a search operation in Bonzuri Forest area.
The troops carried out searches in Bonzuri Forest area after information about a militant hideout. “When search of the area was being carried out, a militant hideout between large stones was busted. The recovery included war like stores, including one AK-47, eight magazines of AK- 47, 242 rounds of AK-47, two Chinese pistols with three magazines and 22 rounds, five Chinese grenades, 15 UBGL rounds , one binocular and one telescopic sight along with communication equipment and few utensils and clothes”, an Army officer said.
He said that militants were planning a massive attack and the recovery of such a huge cache is a big blow to their designs.
And a group of militants appeared at a local mosque in Hajin town of North Kashmir’s Bandipora district last night and warned the local youth against visiting Police Stations and Army camps.
Militants wearing masks appeared at Bon Mohalla mosque in the town and addressed the people present there. “Anyone found visiting the police stations and army camps will have to face the consequences,” they warned.
Police today foiled an attempt to loot the Jammu and Kashmir Bank cash van in Shopian district of South Kashmir.
Militants opened fire on the cash van at Chidipora area of Zainapora and tried to loot the money. The security guards foiled their attempt and the robbers fled away from the spot. A manhunt was launched to nab the attackers.
Meanwhile, militants tonight made an abortive bid to snatch weapons from the Police men guarding the house of Advocate General Jehangir Ganai at Mattan in South Kashmir district of Anantnag.
Sources said that there were three SPOs as guards in the house but they had already shifted their weapons when the militants entered the house to snatch them.
The SPOs were severely beaten up by the militants and they also ransacked the house hold goods as they thought the SPOs had hidden the weapons somewhere inside the house.
Militants later fired in air and fled away. Security forces immediately rushed to the spot and cordoned off the area.