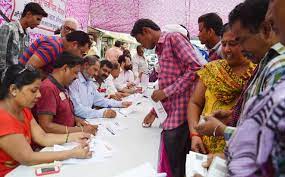 NEW DELHI, Aug 28: Bank accounts under Pradhan Mantri Jan Dhan Yojna (PMJDY) have increased to 43 crore with total deposits over Rs 1.46 lakh crore, the finance ministry on Saturday said as the government’s flagship financial inclusion scheme completes seven years of implementation.
The PMJDY was announced by Prime Minister Narendra Modi in his Independence Day address on August 15, 2014 and was simultaneously launched on August 28 to foster financial inclusion. This national mission was launched to ensure people have access to financial services, namely, banking, remittance, credit, insurance, pension in an affordable manner.
As on August 18, 2021, the number of total PMJDY accounts stood at 43.04 crore. Of this, 55.47 per cent (23.87 crore) Jan-Dhan account holders are women and 66.69 per cent (28.70 crore) holders are in rural and semi-urban areas, the finance ministry said in a statement.
During the first year of the scheme, 17.90 crore PMJDY accounts were opened.
Out of total 43.04 crore PMJDY accounts, 36.86 crore or 85.6 per cent are operative, and the average deposit per account is Rs 3,398, as per the statement.
Increase in average deposit is another indication of increased usage of accounts and inculcation of saving habit among account holders, it said.
Total RuPay cards issued to PMJDY account holders rose to 31.23 crore. For account opened after August 28, 2018, the free accidental insurance cover on RuPay cards increased from Rs 1 lakh to Rs 2 lakh.
On this occasion, the Prime Minister tweeted, “Today we mark seven years of #PMJanDhan, an initiative that has forever transformed India’s development trajectory. It has ensured financial inclusion and a life of dignity as well as empowerment for countless Indians. Jan Dhan Yojana has also helped further transparency.”
Appreciating the untiring efforts of all those who have worked to make PMJDY a success, he said, their efforts have ensured the people of India lead a better quality of life.
Finance Minister Nirmala Sitharaman, while underlining the importance of the scheme, said the journey of PMJDY led interventions undertaken over a short span of 7 years has in effect, produced both transformational as well as directional change, thereby making the emerging financial inclusion ecosystem capable of delivering financial services to the last person of the society-the poorest of the poor.
“The underlying pillars of PMJDY, namely, Banking the Unbanked, Securing the Unsecured and Funding the Unfunded has made it possible to adopt multi-stakeholders’ collaborative approach while leveraging technology for serving the unserved and underserved areas as well,” she said.
Under the PM Garib Kalyan Yojana announced on March 26, 2020, an amount of Rs 500 per month for three months (April’20 to June’20) was credited to the accounts of PMJDY women account holders, the finance ministry said.
A total of Rs 30,945 crore has been credited in accounts of women PMJDY account holders during Covid lockdown as an income support measure.
About 5 crore PMJDY accountholders receive direct benefit transfer (DBT) from the Government under various schemes, the ministry statement added.
To ensure that the eligible beneficiaries receive their DBT in time, the government takes an active role in identification of avoidable reasons for DBT failures in consultation with DBT Mission, NPCI, banks and various other ministries, it said.
With close monitoring in this regard through regular video conferencing with banks and NPCI, the share of DBT failures due to avoidable reasons as a percentage of total DBT failures has decreased from 13.5 per cent (FY 19-20) to 5.7 per cent (FY 20-21), it noted.
On the road ahead, the finance ministry said, eligible PMJDY account holders will be sought to be covered under the Pradhan Mantri Suraksha Bima Yojana (PMSBY) and Pradhan Mantri Jeevan Jyoti Bima Yojana (PMJJBY).
Banks have already been communicated about the same, it said.
The government is also focussed on promotion of digital payments including RuPay debit card usage amongst PMJDY account holders through creation of acceptance infrastructure across India, it said.
Another focus area is improving access of PMJDY account holders to micro-credit and micro investment such as flexi-recurring deposit etc, it said. (PTI)