Govind Sharma
Capt Shivani Manhas, a first officer of Air India who belongs to Jammu, has given wings to aspirations of many girls of Jammu by successfully flying the inaugural Air India (AI) flight on world’s longest route from San Francisco (USA) to Bengaluru in India, along with her three female co-pilots.
The inaugural flight AI176 departed from San Francisco in the USA at 8.30 pm (local time) on January 9 and landed at the Kempegowda International Airport at 3.45 am (local time) on January 11. Besides, Capt Shivani Manhas, other pilots of all women cockpit crew were Captain Zoya Aggarwal, Captain Papagari Thanmai and Captain Akansha Sonaware. Captain Nivedita Bhasin, Executive Director (Flight Safety), Air India, was also travelling on this flight as a passenger.
It was an historic flight in many ways. Firstly, it was first direct flight from San Francisco to Bengaluru covering over 16000 kilometres. Secondly, it was flown by all women cockpit crew consisting of four pilots. Thirdly, it was the toughest and longest aerial route of the world.
This was the first ever non-stop service between Bengaluru and San Francisco connecting the world’s two technical hubs—the Original Silicon Valley and Silicon Valley of India. The crew operated the inaugural flight over the North Pole and covered a distance of about 16,000 kilometres.
Daughter of Mohini Manhas & Shamsher Singh Manhas and resident of Trikuta Nagar (Jammu), Shivani Manhas was born in village Akalpur on outskirts of Jammu. She passed out her Class 12th exams from Delhi Public School and then went for aviation training in Madhya Pradesh Flying Club of Indore. It was only in the year 2016 when she started her job in Air India.
In an exclusive interview to EXCELSIOR, Capt Shivani said she wanted to fly aeroplane since her childhood as flying planes in the sky always used to attract her. It was my ambition and I am happy today that I could fulfill my childhood dream, she stated.
Sharing her experiences of the historic Air India flight from San Francisco to Bangalore, Capt Shivani said, “It was an exciting experience since it was never done before. It took almost 17 hours to reach Kempegowda International Airport (Bengaluru) from San Francisco (USA)”.
“Till we landed at Kempegowda Airport, we had no idea of what we are going to achieve and how big it was. But on landing here when we got a rousing welcome by a large number of people who were applauding and presenting flowers/bouquets to us, our joy was boundless and we were feeling proud on ourselves,” she said.
Shivani said it was really historic as first time all-women cockpit crew flew the passenger aircraft on the longest and toughest route of the world, over the North Pole and successfully reached the destination. She disclosed that it was the maiden direct flight on this route which saved 10 tonnes of fuel. 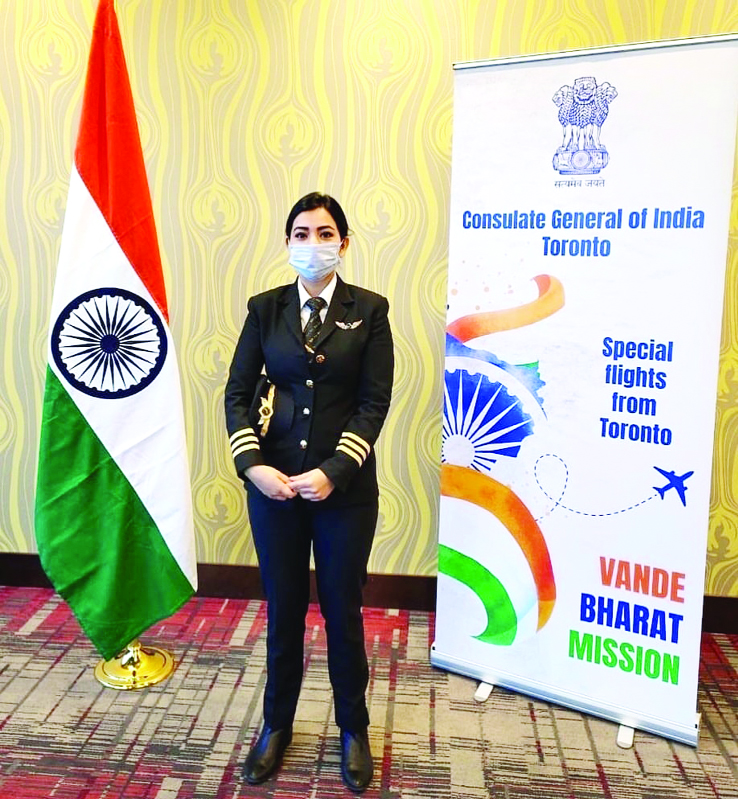 The Air India captain said that like them the passengers of the flight too were excited and on landing at Bengaluru, many passengers came to them and told that they specially purchased the ticket of the flight only to become part of that historic flight. Some passengers, particularly children shared that they were excited for the flight as they were going to get opportunity to see the Northern lights of Norway from the comfort of sitting in the flight.
“Our job is a high risk job, there is no scope of error but this specific flight was the toughest one but thanks to the Air India for providing us thorough training that enabled us to achieve this feat. The preparations for this flight were on for last one year. We were excited but at the same time there was also sense of responsibility as we were going to do what was never done and we could have faced any problem/challenge which we had not experienced earlier,” she added.
Talking about the challenges they may have faced during the flight, Shivani said no doubt they had special training for the flight and every thing was planned properly but when you are flying over the polar region, there are so many risks as most of the airports/runways in the region are snow covered and in case of emergency landing all the plans fail. “You don’t have time to think where to land and have to take a quick decision, she said, adding they were carrying with them two polar suits each weighing 30 kg in the flight and in case of emergency landing in the polar region, they could come out only wearing that polar suits.
“The other big challenge in front of us was more exposure to ultraviolet rays as at high latitudes, the Ozone layer depletes and causes increased UV radiation levels which is damaging to human health and the negative effects include certain types of skin cancers, eye cataracts and immune deficiency disorders,” said Capt Shivani.
To a question whether she or any of her team members in the flight ever thought that their team should have at least one male member, Capt Shivani said such a thought never came in her and her team members mind. “On Women’s Day, I use to be part of all women crew flight and I always enjoy these flights. I have no fear as my training from Air India and MP Flying School was very good,” she said, adding, it doesn’t matter to her whether her team mates are males or females but she enjoys more with female members.
The proud daughter of Jammu said that nothing is unachievable if one makes his/her mind and she is live example of that. She advised girls like her to never give up and dream big and work hard to fulfill their dreams.