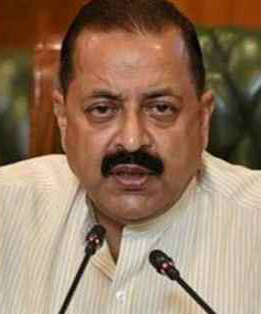 Excelsior Correspondent
NEW DELHI, Aug 12: Jammu will be the first city in North India to get a full-fledged Space Technology Research Centre, devoted to research, academics and Post-Graduation degree course. The Centre will function under the aegis of the Central University Jammu and will be exclusive in nature.
This was disclosed here today by Union Minister of State (Independent Charge) for Development of North Eastern Region (DoNER), MoS PMO, DoPT, Dr Jitendra Singh, who is also Incharge Space Department, while briefing about the year-long “Sarabhai Centenary” programmes of ISRO (Indian Space Research Organisation), beginning from today, on the occasion of the 99th birth anniversary of Dr Vikram Sarabhai, the first Chairman of ISRO and the founding father of India’s Space Programme.
Dr Jitendra Singh recalled that Vikram Sarabhai al-ways insisted on ISRO playing a meaningful role “nationally” and said he was personally feeling vindicated that during the four years of the Modi Government, we had succeeded in extending the Space related academic and research programmes to remote areas, which earlier had little exposure to the study of Space Technology. He disclosed that in addition to Jammu, the other town selected for opening a Space Technology Research Centre is in the Northeast in Tripura, where it would function under the aegis of National Institute of Technology (NIT) Agartala.
Dr Jitendra Singh said, the space research and academics was hitherto confined mostly to South Indian States and over the last four years, it had been a constant endeavour to spread it to other parts of the country. He said, the Centre at Central University Jammu will provide a strong technical platform not only for Jammu & Kashmir but also for the neighbouring States, and would also create new job opportunities for the youth of this region.
Dr Jitendra Singh disclosed that he had personally requested Dr K. Radhakrishnan, world renowned scientist and former Chairman of ISRO under whom the Mars Mission was launched, to be the formal “Advisor” for the new upcoming teaching department of Space technology in Central University Jammu. He said he was glad that Dr Radhakrishnan had responded very positively and even undertaken a visit to Jammu.
The teaching departments of Space Technology at Jammu and Tripura, Dr Jitendra Singh said, will offer a new opening and a Godsend opportunity for scholars and youngsters who have aptitude for Space science, to explore a new career and research option.
To mark the beginning of the Sarabhai Centenary celebrations today, a bust of Dr Vikram Sarabhai was unveiled at the ISRO Headquarters.